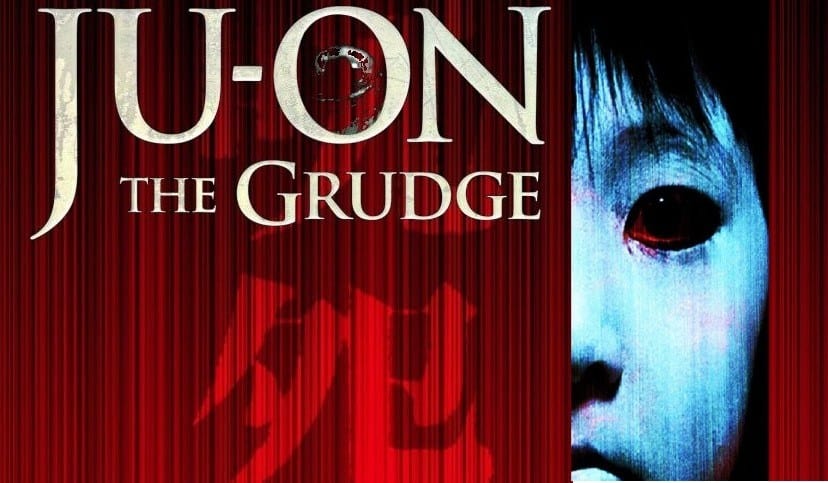 There have been a few notable themes in the movies we’ve gone over this month.  First, we saw a lot of so-called “elevated horror” (which is a horrible, disingenuous term that excuses on-high snobbery against the genre wholesale, save for the one or two exceptions that critics of “good taste” are “allowed” to like by their peers), which generally broke down into witch and medically-themed horror.  Second, we saw a lot of New French Extremity films: gory, visceral and generally stomach-churning affairs that betrayed a deep-seeded anxiety left over from the Nazi occupation of the country during second world war.  Finally, while we haven’t strictly speaking talked about it yet, the peripheral subject of J-Horror has come up time and time again.  And now that we’re back far enough to truly dig into some of the gold standard movies of that late-90s, early-aughts moment of Asiatic terror, I’m sad to say that there’s just not a lot that the constraints I set for myself here (one movie per year from the past 31 years) allow for me to talk about.

Seriously.  I “ran the numbers” more than once (spoiler alert: there actually were no numbers) and the simple fact of the matter is that while J-Horror was prevalent during the turn-of-the-millennium, and while I liked an awful lot of it quite a great deal, I mostly gravitated towards other genre offerings from that same period.  We get today’s entry, Ju-On: The Grudge – which is notably the only ghost story of the group, despite it being the dominant subject that was addressed at the time – and one more that might have flown under the less genre savvy’s radar altogether (it certainly was something I had overlooked for a long while after its release).  Pulse (2001), probably the closest to appearing elsewhere in this series and an eerily perfect movie for our moment of panic and self-isolation, had the unfortunate timing of being released the same year as my favorite Guillermo del Toro movie.  Ringu (1998), probably the most famous from this cycle of films, was released at the height of America’s fascination with comedic meta-horror, an overlapping moment that I also loved and my favorite of which appeared in that same year.  After that there are a liberal smattering of other notable entries, but nothing else with quite the punch or cultural ubiquity that these films have. 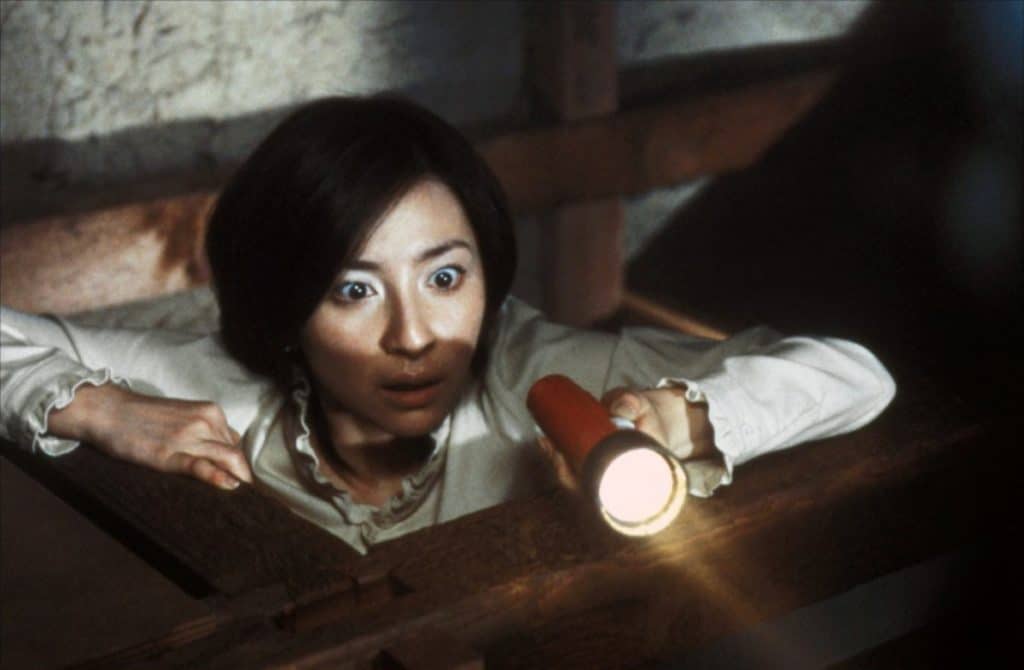 But what we lack for in quantity here we more than make up for in terms of quality.  Because, of the lot, there are hardly two more interesting, telling and all-around terrifying movies to choose from (although Pulse missing out really does grind my gears).  Outside of Ringu, these really are the most emblematic of this particular moment of horror – Ju-On especially – and they stand as two monumental heavy-hitters in the annals of the genre.  So consider this more of a greatest-hits recommendation rather than an exhaustive run-down of all the Japanese must-sees from the decade.

When the Saeki family become the victims of a grisly tragedy, their Tokyo home becomes horribly cursed.  Anybody who enters their home will be stalked by the ghosts of the family and killed in equally horrific ways.  The site of their deaths will similarly become cursed, exponentially spreading the curse in perpetuity.  Following a number of new victims to the spectral affliction – including Rika, a kindly young nurse caring for the elderly Sachie – the ghosts of the Saeki family – most visibly by the long-hair ghoul Kayako, who recapitulates her vengeance on innocent victim after innocent victim in perpetuity. 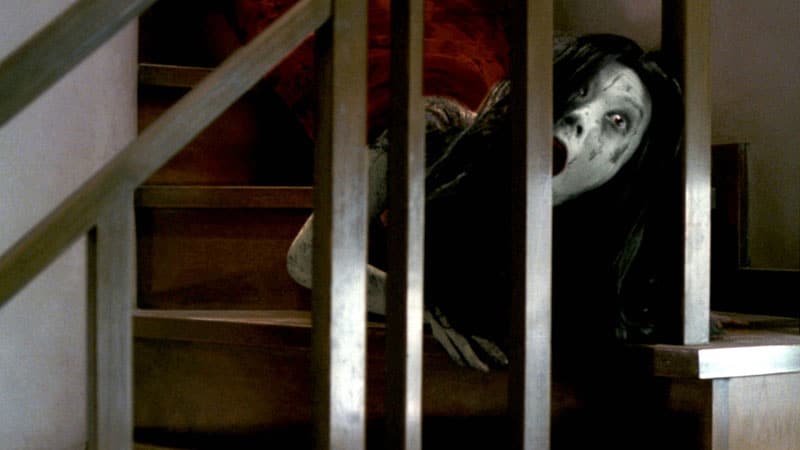 It’s easy to overlook today – when everything about the franchise has spun out into a maddeningly commercialized pop-cultural presence, up to and including a monster-mash crossover with the ghostly antagonist from Ringu in the Freddy vs Jason-esque blowout Sadako vs Kayako (2016) – but this very first movie was indeed not just good, but outright revelatory when it hit the scene in the early 2000s.  Remember, American filmmakers are terrible at making a good ghost story.  We need our horror to be physical and present and tangibly defeatable; even we aren’t so nihilistic as to imagine an unstoppable, intangible killer that’s as inexorable as the tide.  That’s why, on the rare event that we do make a good ghost story, it invariably comes by way of a transplant from Britain (The Shining), Mexico (Crimson Peak), New Zealand (The Frighteners) and Norway (Scary Stories to Tell in the Dark).

In fact, it is extremely notable that Ju-On’s own American remake, The Grudge (2004), couldn’t recapture that same spark that was so invigorating about the first movie, and that’s despite the presence of returning director Takashi Shimizu!  The problem with the remake, even though it utilizes the same director, basically the same script and the same omnipresent sense of dread, is that they nevertheless rewrote the role of Rika to be an American nursing abroad, rather than as a native Japanese medical practitioner, thus transforming what was otherwise a mundane, recognizable and thoroughly ordinary setting into an exoticized locale for “foreign” horrors.  That one little change fully was the domino that toppled the entire production. 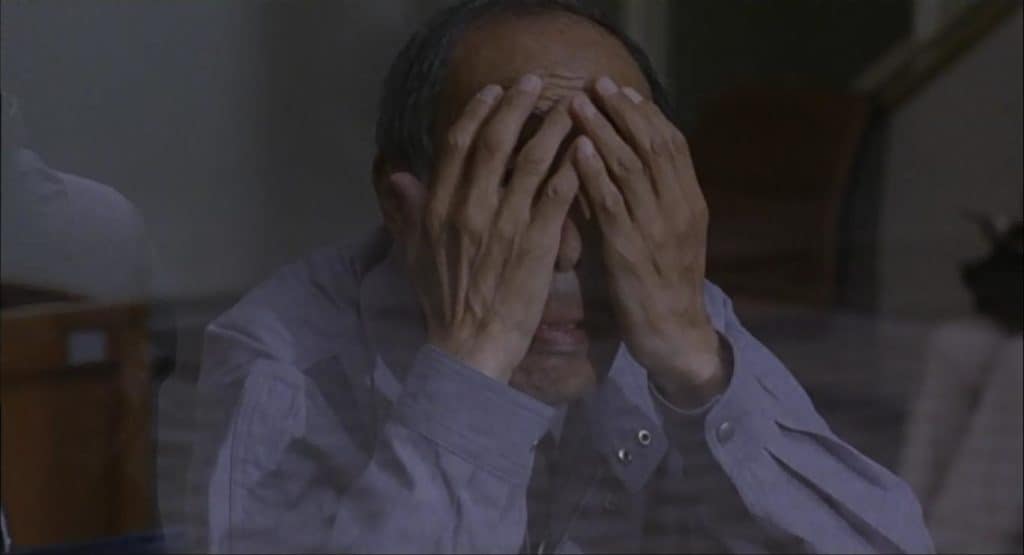 But in Ju-On, there is no awkwardly shoehorned-in foreign interlopers nor any unintended exotification to have to unpack.  The setting is as ordinary as the ones found in The Exorcist (1973) or Poltergeist (1982), and the terrors just as hair-raising.  But as we’ve seen elsewhere, the filmmakers responsible for Ju-On fundamentally understand – in ways that American filmmakers simply do not – that, as Guillermo del Toro puts it in Crimson Peak (2015) – that “it’s not a ghost story [… the ghost is] a conduit, a pretext to talk about spirituality.  The ghost acts as a metaphor.”

The reason why ghosts have such power in the horror genre is that they are pale echoes of the past: something to shake the living world out of its complacency and point a white-hot spotlight on the ongoing injustices stemming from past wrongs.  It’s no wonder, then, why American filmmakers really can’t come to terms with this conceptually, as our society willfully ignores any implications of past wrong-doing with a dismissive hand-wave and mumbling something about how “I didn’t own any slaves,” or “my ancestors came after they drove all the native tribes off their land.”  Hell, we can’t even say that Black lives matter without some mouth-breathing troll mumbling something about how “all lives matter.” 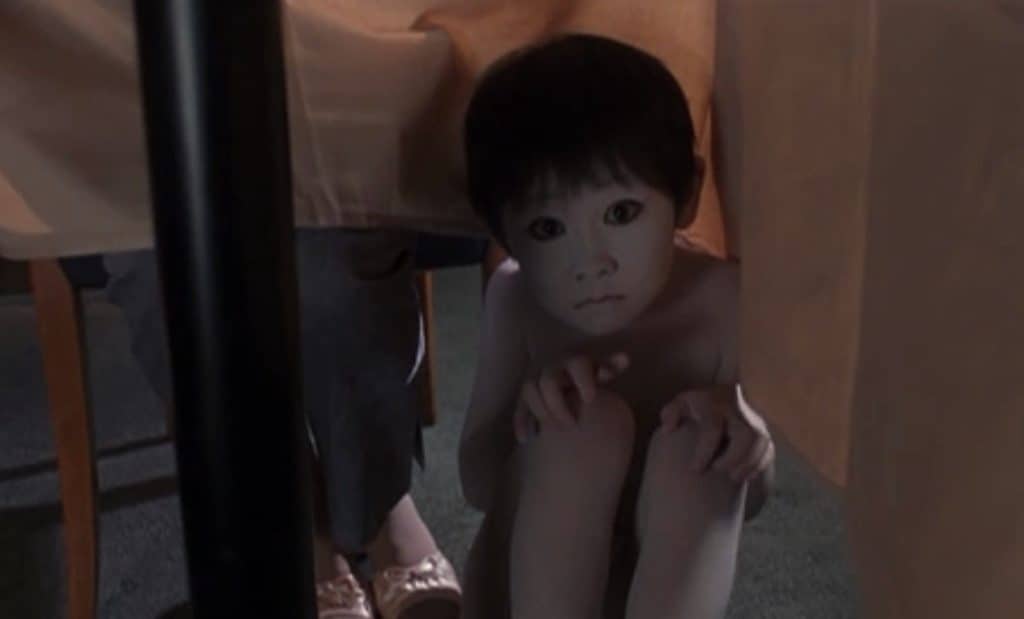 But Ju-On is different.  Ju-On understands the ways in which the past cannot be ignored, the ways in which it violently reprimands the present for its presumed non-culpability and ongoing blindness to the still-rampant problems that caused the curse to form in the first place.  It is about generational violence, inflicted time and time again on new victims increasingly removed from the original tragedy, is an inherited trauma, affecting those with increasingly little to do with the inciting incident.  It is a single, tragic moment rippling out through the years, poisoning everything it touches with its original sin.