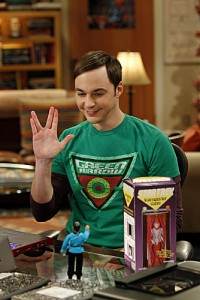 For years now, The Big Bang Theory has had a few dream guest stars and on last night’s episode they not only got a huge sci-fi icon to appear but also in a way that made a lot of sense beyond some flashy cameo. After Penny was made to feel guilty (by Sheldon) for mooching free food off of the boys all the time she decided to do something to pay them back for it. Upon a visit to Stuart’s comic book shop she returned with two rare Star Trek collectibles of the transporter device from the series. Of course, being how they are, Sheldon and Leonard refused to open their new prized possessions as they want the collectible to remain ‘˜mint in box’. That doesn’t stop Sheldon from being convinced to open his anyway and that’s where Nimoy comes in.

Appearing only in voice-over form, but being no less awesome for it, Nimoy basically plays himself and Spock as he appears as the voice of Sheldon’s original Spock action figure. It works so well as a cameo not only because it’s Leonard freakin’Nimoy and he makes everything he’s involved in lately just a little bit cooler, but it’s because this Spock is actually serving as Sheldon’s conscience. If any pop culture figure were to be Sheldon’s conscience it makes the absolute most sense that it be Spock. One could accuse Sheldon of having Vulcan-like emotional capabilities not to mention an unwavering devotion to the ways of logic.

His own inner voice convinces him via Spock figurine to open his toy and play with it. Of course it doesn’t take much to break a toy all the way from 1975 and so when he does Sheldon then must deal with the moral dilemma of having replaced his broken toy with Leonard’s. Eventually he breaks down and tells Leonard (and Penny who is really good at getting to the heart of things with Sheldon more so than anyone else) the truth, but the whole storyline was elevated by the Nimoy cameo. It’s probably only going to be a one-time appearance but let’s hope that Leonard Nimoy finds his way back onto TBBT since those scenes were some of Sheldon’s best all season–all due to Jim Parsons excellent interplay with Nimoy. 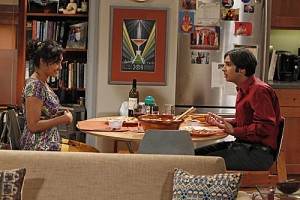 Elsewhere Raj has his own dilemma to deal with as he starts dating again thanks to the time-honored tradition of arranged couples. His parents set him up with a woman named Lakshi who seems to be the perfect woman for Raj. She’s intelligent, lovely, oh and she also happens to like other women not men. This leads to an extended ‘˜Raj is probably gay’joke on a series that has had many of these moments, but it’s worth nothing that he’s not viciously offended when the case is made for it. He decides that perhaps he will go ahead and marry Lakshi so that they can both get their families off their backs while still being able to pursue other interests.

Howard finds out about this and he’s less than supportive. It’s funny that someone who was once portrayed as a fairly sleazy guy when it came to his thoughts about women and dating has turned into ‘˜that’guy. You know, the one who finds marriage so sacred all of a sudden just because he’s on that track himself. It’s true that Raj marrying Lakshi is a controversial choice, but he would also be doing something incredibly considerate for someone who can’t live her life very easily being who she is within their culture. We don’t see her again after that but it might be fun to have Lakshi show up again as a female friend of Raj. Let’s face it, when he’s not with the boys (who are now often with their own mates) he’s alone so that wouldn’t be the worst development to come out of their meeting.