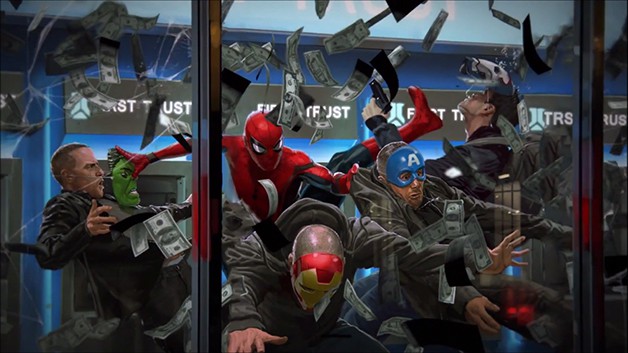 The world of comic books existed long before any of the recent slews of superhero movies or animated series started coming out. Don’t be surprised to hear that a lot of people didn’t know this, or even that majority of the time, the stories we see on animations or movies actually coincide with a comic book story. While there have been hundreds of comic book characters that have been turned into animations, they weren’t all created equally. Here are 5 animated characters that actually came out better than they were in the comic world.

Seeing this guy-next-door come to life as an animation was awesome. To know Spider Man’s power is to see him in action after all. We saw this animated character swing from building to building in the 90s with the iconic opening sequence, the gray-haired Aunt May as we remember her dearly, and of course, Peter Parker as the superhero/photographer trying to lead a somewhat normal double life. The character in the older animation series completely captures what Spider Man is, which is just a comic and average teenager with super abilities.

There’s a lot left to be desired when it comes to the comic book Green Arrow. The Star City superhero was literally given life as an animation in The Brave and the Bold. The comic book kind of abandoned Oliver Queen’s story a while back to the complications of adult life. The animations gave the Green Arrow some other purpose, and while it may seem like he was the Batman in green (and with arrows) back then, the Green Arrow has found his own footing in the animated superhero world since.

We pretty much learn that Harley is more than just a sucker for Joker in the animated series. The infamous female sidekick can actually hold her own. We’ve seen her evolve throughout the years, but the comics focus too much on Harley being Joker’s forlorn and over obsessed lover. While we do see a little bit of that in the animated Batman series, Harley is a lot less over sexualized and to be honest, a lot more able also. And while the comic books have slowly changed that, we can’t get over how much her look has changed over the years also. We love Harley dressed as a jester; it just makes sense.

There was just something about the Flash in the Justice League animated movie. Similar to Spider Man, we had to see the Flash in action to really appreciate the character. And while many of the Flash’s comic book stories are mediocre compared to Superman or Batman at the time, Justice League: Flashpoint gave the speedy guy the starring role for once. With the movie being about everything Flash, it gave us a good look into what he can really do within the team, even with Batman and Superman there.

Perhaps the best superhero animated series is of the X-Men in the 90s. The cartoon stories were so close to the comic books; it just gave the characters so much depth seeing them in full motion and interaction. The voice-overs were great, the graphics excellent for when it was released, and the writing awesome. It was one of the highest rated shows in the network at the time; it was absolutely better than what the comic books were and the numbers proved it.