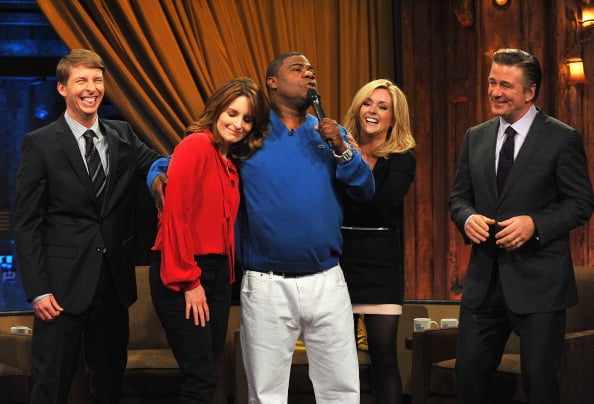 It’s nearly been two years sinceÂ 30 RockÂ ended andÂ the Liz Lemon-ledÂ TGS with Tracy JordanÂ signed off for the last time – but thanks to syndication (seriously; isÂ 30 RockÂ on every single channel), it feels like NBC’s last comedic critical darling is still alive and well in the cultural zeitgeist. With the memory of “Last Lunch” still fresh in our minds, we’ve picked the best five endings fromÂ 30 RockÂ season 7 (honorable mention goes to Tracey, whose dad finally came back from getting cigarettes):

The single most-hated member of theÂ TGSÂ writing room, Lutz was always the butt of jokes (those not directed at Two-Fer, of course) around the writer’s table, a nice easy, flabby specimen that everyone on the show used as their stress release. More so, Lutz’s struggles with his sexuality (not to mention being the cousin of a famousÂ TwilightÂ actor) took a toll on the poor man, who more than once showed us how close he was to snapping once and for all.

Knowing all that, it’s only right thatÂ 30 Rock‘s finale “Last Lunch”, predominately features Lutz finally getting to pick where the staff got lunch – and decided on Blimpie, sending the entire writing room in a rage. Lutz’s revenge might not be the most significant ending onÂ 30 Rock, but it’s one of the most pleasant, a fun little pay-off for fans of the show who laughed along at Lutz’s expense for seven seasons.

Although it would turn out to be a futile attempt, Pete trying to fake his death and move on was one of the finale’s most hilarious moments, culminating a plot line running throughoutÂ 30 RockÂ season 7 (and to be honest, every season) where Pete just wants to escape it all. After failing at archery and being a pop singer, who wouldn’t want Pete to experience a little freedomÂ after the torture of working atÂ TGS: too bad it turns out Pete was as good as faking his death as he was everything else in life; just not quite good enough. It may not be the happiest of endings on the show, but it’s the most fitting ending for Pete, and certainly earns itself a spot on this list.

The entire final season ofÂ 30 RockÂ is really a victory lap for Liz Lemon: although her show gets cancelled, she finally gets to have a family, which includes a husband hot enough to be a astronaut, and two kids that bear more than passing resemblances to herÂ TGSÂ stars Tracey and Jenna. She even gets to keep working in TV after TGSÂ getsÂ canned, taking a position on the new hit NBC comedyÂ Grizz & HerzÂ and letting Criss take on his desired role of stay-at-home dad (after all, the whole “healthy hot dog” food truck idea didn’t pan out so well, especially in Jewish neighborhoods). In short, Liz got the ending she earned after seven years of hell.

This one is simple: Kenneth is so high on this list because he gets the job he always wanted: president of NBC, the man who makes the decisions and gets paid to love TV. And as we see in the final scene of the show, Kenneth holds that job for a very, very long time – long enough to hear a pitch fromÂ Liz’s granddaughter about a potential new comedy. Sure, the NBC job may not be what it used to be in its GE days, but there was no better hands to leave Jack’s legacy in, giving us all a satisfying final image toÂ 30 RockÂ season 7 – and the series as a whole.

I’m sure most wouldn’t have Jack at the top of their list – but there’s something about Jack’s ultimate journey of self-discovery that rings true to me, even though I’m not at that middle age to begin questioning my personal and professional decisions. The last season ofÂ 30 RockÂ is really Jack’s journey: where many other characters were working towards their happy, defined endings, Jack’s flailing at NBC (trying to tank the company, then eventually turning it into the most efficient, profitable business ever), combined with the death of his mother (and the discovery she had been a lesbian for decades) were moments that challenged his characters in new ways, ultimately leaving us with a man happy with his un-satisfaction, excited at the opportunity to once again redefine himself on the open waters of the Atlantic Ocean. It may not be a perfect ending, or even a decisive one: but it’s certainly fitting for the man who never rested, who never said anything was “good enough”.