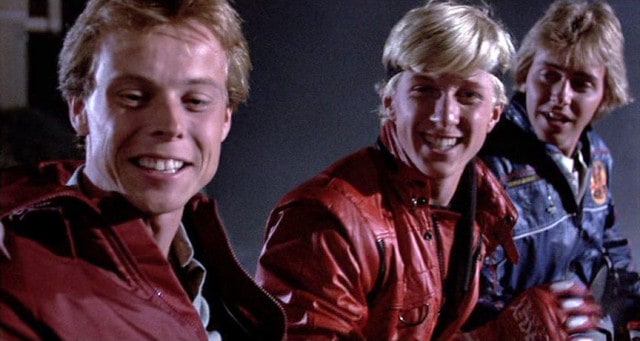 Sigh. I almost expect the criticism that might come when taking the time to write anything about The Karate Kid that isn’t entirely complimentary. But talking realistically one has to step back and put on their objective cap just to look at this film in a way that speaks of anything but emotional attachment. Now that those of us that grew up with this film are older and can look at things in a different light it’s easier to see the flaws in the old films we once viewed and the holes in the plot that make it less than believable.

So if you read this, keep in mind that one of our favorite movies does have a few few flaws in its plot.

5. Daniel realistically has no chance with Aly.

This seems mean right? Honestly Daniel gets a girl that is kind of miles beyond him if you stick to the accepted high school hierarchy. He’s the new kid, has an out of control temper, and isn’t really into anything other than being a nuisance. Johnny might be a jerk but at the very least he’s a local and is known to Aly whereas Daniel is an unknown. Maybe she just had a thing for the new guy. It could explain why she dumped him in the sequel.

4. Johnny would defeat Daniel quite easily


No offense to Mr. Miyagi’s training methods, but he kept everything pretty basic with Daniel. Johnny’s obviously been training for a while and is in peak condition, not to mention that he’s far more skilled. In karate skill will almost always trump luck, and unless Daniel’s newly developed skills were too unpredictable, Johnny should have annihilated him. But then again, the look he gave his sensei conveyed a definite lack of confidence that could have affected the outcome of the match.

3. Mr. Miyagi would be looking at child abuse charges.

No other way to say it with this one. Johnny and his buddies might have been in the wrong but they were still minors and as such Miyagi would be facing some serious legal repercussions for his actions. If their sensei hadn’t called the cops then it would be likely that their parents would after seeing them. And do you really think Johnny and his buddies wouldn’t point the finger at Miyagi?

Karate is not about actively hurting people or being outwardly aggressive. It’s more about self-defense really and John Kreese is an in your face and obviously aggressive character. He doesn’t suffer those that don’t agree with him and it’s more than likely that his students’ parents don’t know that much about his methods. Any good sensei would likely agree that he’s not a good man to learn from.

1. Daniel Laruso would have been disqualified for the Crane Kick.

Another sigh. It was so satisfying to watch Daniel win after so much, but it was also very confusing. We’d already seen a penalty levied for a hit to the face. Now take into consideration that being kicked in the face is bound to be much more damaging. Also consider that Daniel didn’t look like he was holding back at all. Not only should he have been disqualified, but he’d be lucky if Johnny or his parents weren’t going to press charges.

It’s hard to have to poke holes in what seemed like a sound movie for so long, but watching the film without noticing these obviously glaring plot holes is kind of hard as an adult.