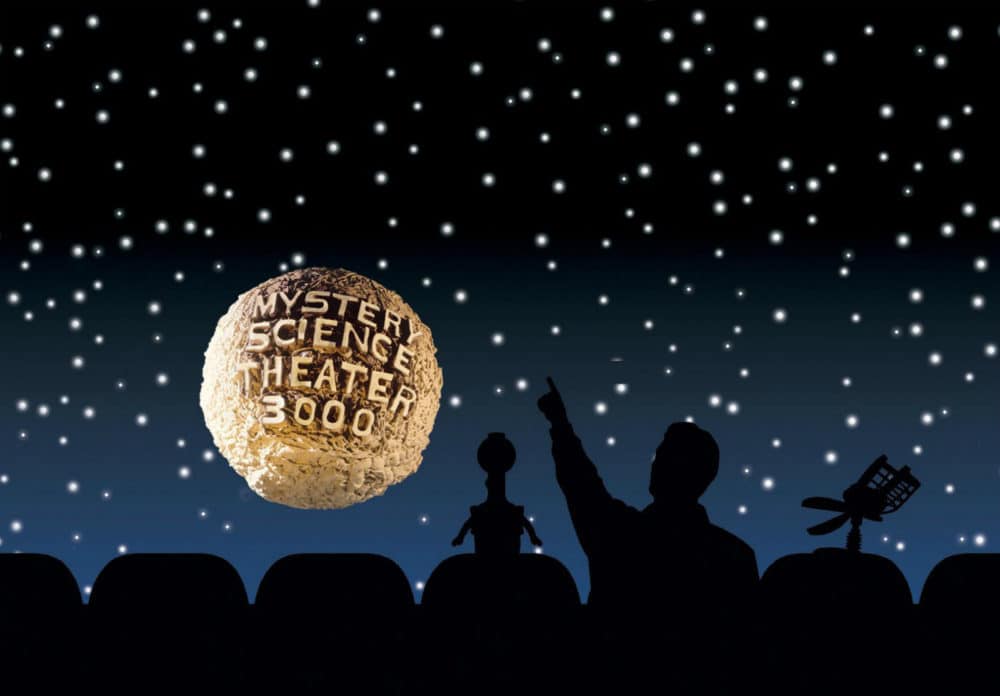 Over the weekend, the MST3K (that is, Mystery Science Theater 3000) crew gave us some updates about the pending season 12 of the series (or, rather, Season 2 of the Netflix revival).Â  Among other things, we learned that we’re in for a shorter season than last time around (only 6 episodes) and even a movie that was made in the last five years (personally, my moneys on Sharknado, which would be a Hell of a lot of fun).

This, of course, has sent people whose job it is to write about stuff like this (ie, me) into renewed rounds of speculation concerning what movies will or won’t make the now truncated lineup for the forthcoming season.Â  Everybody has their favorite “bad” movies, or treasured oddities that they find perfectly riffable themselves, and I am no different from anybody else in this regard.Â  And to that end, these are the five movies that I would most love for the Revival crew to sink their teeth into in Season 12 and beyond. 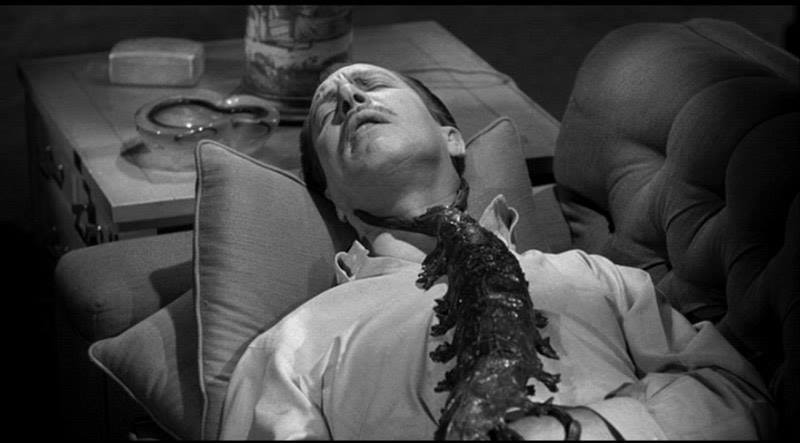 Sometimes it’s not how objectively “bad” a movie is that makes it ripe for a show like this.Â  Sometimes it’s a hook that has almost nothing to do with what we actually see on screen over the course of its runtime.Â  The classic series episode concerning the movie The Screaming Skull is the perfect example of this, in which the opening scene explains that the movie’s climax is so innately terrifying that the studio will pay for the burial of any audience member who died of fright because of it.Â  And, as you would imagine, this was fertile ground for riffing throughout the entire episode.

Although considerably better than The Screaming Skull, The Tingler comes with its own infinitely riffable packed-in gimmick.Â  The movie’s titular monster is a parasite that feeds off of its victim’s fear, making the spine of its victim “tingle” in response to its presence (thus the movie’s name).Â  And for some added impact, each theater showing the film outfitted random seats throughout the theaters with “Percepto,” a hidden device that would cause the chair in question to vibrate, timed to coincide with the monster’s on-screen attacks.Â  And I for one can imagine what fun it would be to watch Tom, Crow or Jonah randomly flailing about throughout the movie! 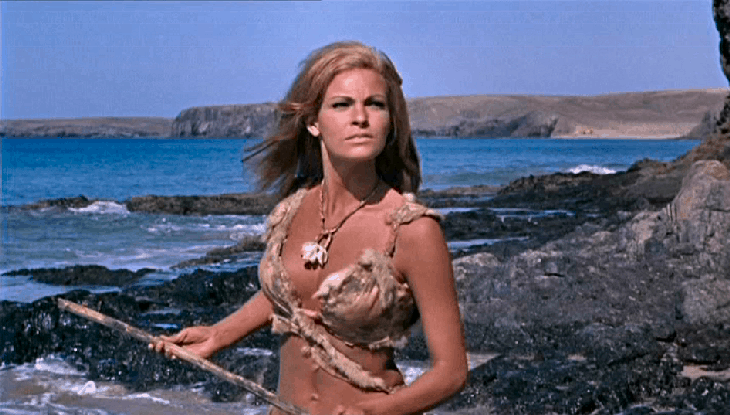 This movie serves a two-fold purpose in this hypothetical roster.Â  Not only is it an easily made-fun-of movie with boundless opportunities to have fun at its expense, but it’s one that most of the audience tuning in would be familiar with, if at least tangentially.Â  You see, in addition to being a fairly infamous film in its own right, the poster for the movie served as a major plot point in the far better movie The Shawshank Redemption.Â  Specifically, it was draped over Andy Dufresne’s escape tunnel at the end of his incarceration (and was memorably torn down by the warden when he discovers Andy’s disappearance).

But wait… that’s not all.Â  In addition to its prescient pop culture notoriety and cave men and dinosaurs and tantalizing catfights — all of which are infinitely riffable in their own right — the movie has another interesting angle going for it.Â  All dialog, every last word spoken on screen, is in a completely made-up caveman language, meaning that the entire cast would have free reign to “translate” and misinterpret all of the goings-on of the film even moreso than usual.

This is a movie that is evidently already on the crew’s radar, as the Skeleton Crew from the series revival are explicitly based on some of disposable hero-fodder from that movie (think the Foot Clan ninjas from the Teenage Mutant Ninja Turtles of the Putties from Power Rangers).Â  That alone is worth its inclusion here, as our intrepid movie-goers would certainly find boundless opportunities to make some meta-jokes at Kinga’s expense both in and out of the movie.

Beyond that, the movie is basically the zaniest version of Power Rangers imaginable, with giant rubber-suited monster fights, some genuinely insane set and costume designs and a lot of action that should keep things fun enough aside from all of the jokes made at its expense.Â  It would keep well with the show’s tradition of questionable Kaiju movies and other low-end international schlock.

Back in the day, the Italian film industry had a funny habbit of piggy-backing off of successful American movies that made a splash in their country.Â  It was actually a pretty common practice to name original and completely unrelated movies as the supposed sequels of their better known American cousins in much the same way that The Asylum tries to trick people in Family Video into renting copies of Snakes on a Train, Fast and the Fierce and Atlantic Rim.

This movie sought to do the same with Dawn of the Dead, whose Italian name was Zombi.Â  Jokes about that alone — its suppose connection / disconnection with Dawn of the Dead or questions about how it lines up with the nonexistent “first” Zombi film — could easily take up half the episode on its own.Â  The thing is, though, that the movie also has a well-earned reputation for what might very well be the most epic scene ever shot in the history of film: an underwater fight scene between a zombie and a shark.Â  Regardless of whatever else there is in the film (and trust me, there’s a lot else to work with here), that alone justifies its inclusion. 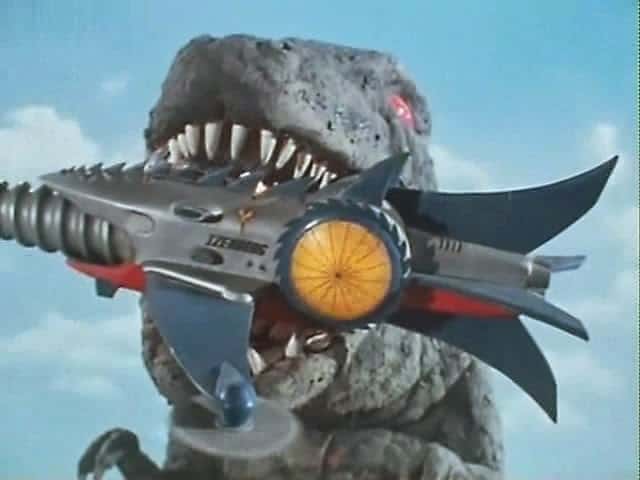 One of the more bizarre features of the show is that they’ve never really dived into the wide world of feature-length animation.Â  They’ve done animated shorts, to be sure, and a lot of those were incredibly funny, but the series as a whole has tended to stick with live action and for a pretty understandable reason: animation is simply harder to riff on.Â  And especially given the more rapid-fire nature of the jokes in the revival relative to the original runs, that’s an understandably big hurdle to have to clear, especially when the latest season is being cut down to so few episodes.

The solution, then, may be to not use a fully animated feature, and Attack of the Super Monsters definitely has them covered on that front.Â  The movie is a bizarre mashup of animation and live action: animating any actual people when they’re in the scene, but playing out its Voltron-esque transforming vehicles versus evil, intelligent dinosaurs combat entirely in live action.Â  And unlike movies like Who Framed Roger Rabbit and Enchanted, the switch-up between the two is jarring and awkward and perfect for the series’ unique cross-section of humor.Â  If nothing else, it would be decidedly like nothing else they’ve ever done.