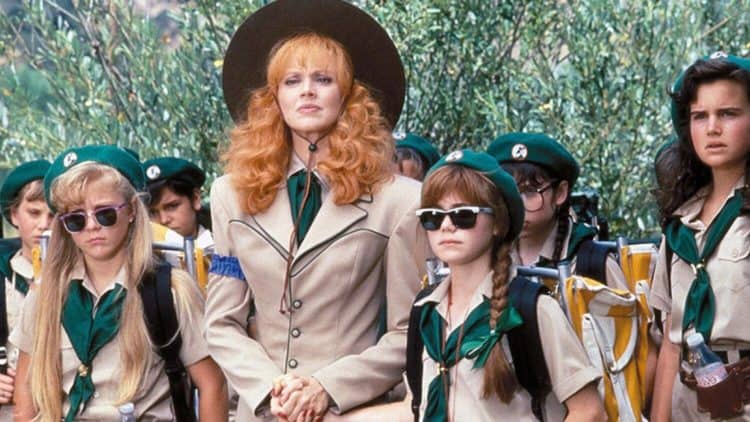 One thing about a Troop Beverly Hills sequel is that we probably won’t be seeing Shelley Long stepping back into the same role since she’s well into her 70s at this point and likely wouldn’t be as capable of handling a troop of young girls in the wilderness. But as far as making a sequel to this movie goes, there’s not much to say other than that it is on the way since until this era is over, or until people are done paying for reboots and remakes and sequels, this is the state of show business and this is what’s going to keep happening, the recycling and reusing of old material in an attempt to revive it for the current generation. It might be that someone took the words of the previous generations to heart when it was said that we had better comedies, better action, and better movies overall, and decided to see if that could be proven. The problem with that unfortunately is the fact that we can’t go back in time, no matter how many theories there are that exist about the subject, and as a result, we can’t get those moments back to compare them in real-time with the remakes that are being rolled out. In other words, there’s no way to compare the two, and there’s no point since one doesn’t cancel out the other. But the hope is that this new version will pay homage to the original and that we’ll at least see Long in a cameo.

For those that didn’t watch the original the movie is pretty easy to explain and it was quite funny. Long’s character is a socialite housewife whose husband is about to divorce her when she becomes a den mother to a group of Wilderness Girls. Needless to say, she knows very little, actually nothing, about surviving in the wild, but instead teaches the girls how to survive in the ‘wilds’ of Beverly Hills. Of course, to many people, this sounds like one of the laziest ways for a Wilderness Girls troop to learn, but somehow her efforts manage to get noticed in a positive light, and after she and her girls prove their worth in a number of ways they do manage to become recognized. In a big way, some might say this is the over-privileged wanting to prove that their way of life is just as important as anyone else’s, but it’s also a comedy that points out that discounting anyone simply because they don’t have the same skill set isn’t the wisest idea in the world. True, Troop Beverly Hills probably couldn’t survive in the wild for more than a few days at best, but at the very least they do manage to prove that they’re up to the task of trying by the end of the movie.

Thinking of it finally producing a sequel isn’t too hard really, since it could show several of the girls as they’ve grown up, placed their own daughters in the Wilderness Girls, and possibly have granddaughters of their own in the group at this point. Hey, some people have kids early, who knows. The point is that while it might be a fun and cute idea to produce a sequel, it’s going to be wise to remind people that the movie existed in the first place since Troop Beverly Hills has kind of gone the same way that a lot of movies from the 80s went and is one of the more obscure titles that people don’t remember that well. Hyping it up just enough would be a good idea before trying to bring it back full force, especially in such a PC-laden era where some of the content might be considered to be a little problematic. The updates needed for this movie would be numerous since the technology available back in the day wasn’t anywhere close to what’s available now and for the most part just about everything has changed in a very profound way. Obviously it’s possible to create a sequel for many reasons, but expecting people to care is going to be up to how the material is bound to be presented and how the intended audience is going to react. That is to say, are people even going to care about the sequel?

The idea that 80s movies making a comeback via sequels, remakes, and reboots is a good one isn’t always something that pans out after all, though among the misses there have been a few hits here and there. But the difference between hits and misses these days is that people actually cared about the original movie, to begin with, this movie was a flop from a financial standpoint since they didn’t even make half their budget back. But obviously cult classics don’t always need to make money to stay popular.