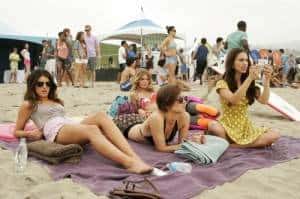 Yearning hearts dominated the thematic outlook of our favorite West Beverly kids and their loved ones last night, but one thing to be thankful for about this week’s 90210 is the almost perfect consistency that has played out this year. Even though the majority of “Best Lei’d Plans” could be considered “filler” or just setting up the pieces for next week’s mid-season finale, it still managed to display the ramifications for a lot of characters’ actions earlier this season.

Teddy finally dropped his guard and let his feelings with Ian flow. While the inevitable kiss between the two had been building up all season long, it was delivered in a quiet, subdued manner and did not call attention upon itself. It was a natural exchange of emotions between two guys who like each other and was treated with much more respect than the Adrianna/Gia pairing of last year. Seemingly, the writers have learned their lesson from that debacle and managed to take something as serious as the discovery of your sexual identity and gave it the deference and time it deserved. However, Teddy and Ian’s pairing has one more hurdle to cross before it can be deemed a success: which is 90210‘s fear of a stable relationship lasting on the show.

The Navid-Silver-Adrianna Quagmire is far from being solved, especially with Adrianna’s growing lack of disrespect for her friends and boyfriend adding fuel to the flames. Jessica Lowndes promised at the beginning of the season that Adrianna was going to be a different person and by God has she delivered on that promise in abundance. Once a fan favorite, Adrianna’s behavior this year has been a complete 180 from not only her redemptive journey from season one, but also from her drug addled beginnings as a troublemaker as well. Last night was no different as Ade pretty much let the “Fame Monster” Lady Gaga warned us about nibble on the triad that is her mind, soul, and dignity. Her body might be next, but if the 90210 writers take us down another path of drugs with Adrianna, it will be unclear if the redemption will be worth watching this time around.

With that being said, the paring of Silver and Navid is becoming for favorable for the masses, especially since the rapport between 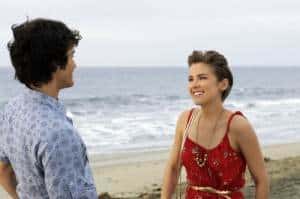 the two is more plausible than an other pairing on the show now. These two were directed into each other’s company by the lack of understanding and compassion from their exes/soon to be exes and those two negatives made for a positive spark, which is worth exploring and, for the audience at least, viewing.

While those two story lines took precedence last night, the other dramatic character fibers continued to grow with Naomi still feeling the implications of her rape on her dating life, Debbie and Ryan Matthews still going at it like rabbits, and Oscar finally realizing that his revenge plan was ill-advised and aimed at the wrong person. With next week being the last new episode of 90210 for a while, one has to ask which story line, if any, will be sacrificed for timing and/or if anything will hit a crescendo, leaving us panting for more next year? Either or… we will still be watching.

What did you guys think about the penultimate episode before the 90210 mid-season finale?