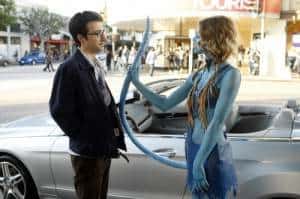 Last night’s 90210 sent us off on another hiatus break with a lot of reveals, hookups, and the sendoff of the most unwelcome houseguest ever in the witch known as Cousin Emily. All in all, a damn fine episode. But before we pop off champagne bottles in honor of Cousin Emily’s eviction from West Bev, let’s talk about the craziness that is Adrianna Tate-Duncan and her descent into madness.

Adrianna looked as if she was going to stab Silver at any given moment tonight and I feared for Kelly Taylor’s little sister’s life. Adrianna knew what she was doing all along and wanted Silver to come clean so she could strike at the right moment. The girl didn’t even give Silver a chance to explain before sending a sext out to all of West Beverly of Silver’s assets, which is bugging me because how did Ade get into the locker room in the first place? She’s no longer a student at West Bev the last time I checked, so where is the security in the place? Also, didn’t anyone learn from Annie’s sexting mess that this can’t end well for anyone involved? Check your notes, kids…

Now let’s all have a moment of BOOYAH!!! for the departure of Cousin Emily. I was aghast at Naomi, Ade, and Silver as they gushed at Emily at the beginning of the episode and wanted to slap all of them on sight. However, such gushing was just the last overbearing hill to climb before sending Emily on her way back East, so I took the pain a little bit longer just to see Emily shed real tears as she was torn apart limb from limb. The icing on the cake? Naomi basically snipping Emily’s life line with the group like a declined MasterCard by saying, “Your life at West Bev is over.” Tootles.

There were other developments in the world of 90210 as Naomi finally snagged Max, but having to completely humiliate herself to do so. The end result? A secret relationship to uphold both parties street cred with their respective social circles. Will it last till graduation? Also, Ivy’s new tonking buddy/beau Raj dropped a bomb on our surfer girl after witnessing her vapidly become marijuana’s latest cult member, revealing that he has leukemia and is taking the drug to ease the pain. As much as I don’t take the 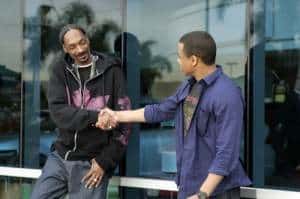 subject of leukemia lightly, I’m trying to see what this storyline will do in terms of building Ivy’s character more? Just asking…

Finally there is the Navid and Dixon’s partnership in Shirazi Studios, which took a turn for the annoying last night in terms of execution. First off, Dixon being starstruck this late in the game is ridiculous. Plus, I find it hard to believe Snoop Dogg would just pick up a random stranger and go joyriding with him just for the hell of it. But the most annoying thing about the storyline was that they made Navid the bad guy in the end after Dixon was acting highly unprofessional the entire time. Yeah, Dixon talked Snoop into working on a video with the studio, but he was in the middle of a task for Navid and should’ve checked in regardless. It’s just bad business skills, period, and Dixon just got lucky as hell in this scenario.

Well, friends, 90210 won’t be here until April 18th, so go out and have one hell of a Spring Break wherever you are. You’re going to need that rest when you get back.