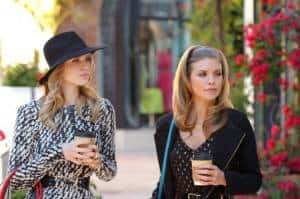 In the March 13 episode of 90210, Naomi meets Annie’s new business partner, P.J. for the first time. According to her, he makes her believe in love at first sight. Unfortunately, Jen also meets P.J. shortly after and also falls for him, although she may be more attracted to his wealth than anything else.

In the upcoming March 27 90210, it looks like P.J. has decided to choose one of the Clark girls. Surprisingly, he actually proposes to Naomi! Although, Annie quickly uncovers an underlying motive to the proposal and it doesn’t necessarily have to do with love: he needs to get married in order to access the rest of his trust fund. Will Annie tell Naomi the truth about P.J.’s intentions? Will Naomi go through with the wedding?

Meanwhile, it looks like Liam finally catches on to crazy Vanessa by the March 27 episode, when he asks her to move out of his place. But she gets her revenge by emptying out their joint bank account.

Finally, Dixon and Adrianna’s relationship might be on shaky ground if she learns that he’s been keeping a big secret from her. Dixon ends up scoring a recording contract in the March 13 episode, but fails to tell Adrianna that the record label didn’t want to sign her as well. By the March 27 episode, Dixon tells Navid about the secret and then also agrees to play back up for Haley Reinhart, but once again falls to tell Adrianna.