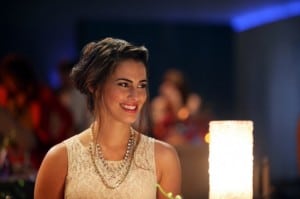 Naomi and Max are reunited in the season premiere of 90210, while Annie deals with the aftermath of Dixon’s accident.

The CW has released an official synopsis for the premiere, titled, “Till Death Do Us Part”: “LORI LOUGHLIN AND SINGER CARLY RAE JEPSEN (“CALL ME MAYBE”) GUEST STAR IN THE SEASON PREMIERE – In the season five premiere, Naomi (AnnaLynne McCord) and Max (Josh Zuckerman) make some big plans that go horribly awry when they both get arrested and land in jail. Liam (Matt Lanter) is forced to put The Offshore up for sale in order to pay off Vanessa (Arielle Kebbel) and buy out her $200,000 interest in Liam’s movie contract. Navid (Michael Steger) approaches Liam about becoming his business partner. Teddy (Trevor Donovan) is overwhelmed by Silver’s (Jessica Stroup) request to father her baby. Adrianna (Jessica Lowndes), unaware Dixon (Tristan Wilds) has gotten into a life-threatening accident, has an unforgettable evening in Las Vegas with a handsome stranger, Taylor (Wes Brown), after she vows to get over Dixon and move on with her life. Annie (Shenae Grimes) asks Ade to return to Los Angeles to be with an unconscious Dixon, and the two girls decide to move into the beach house together. Stuart Gillard directed the episode written by Patti Carr (#501).