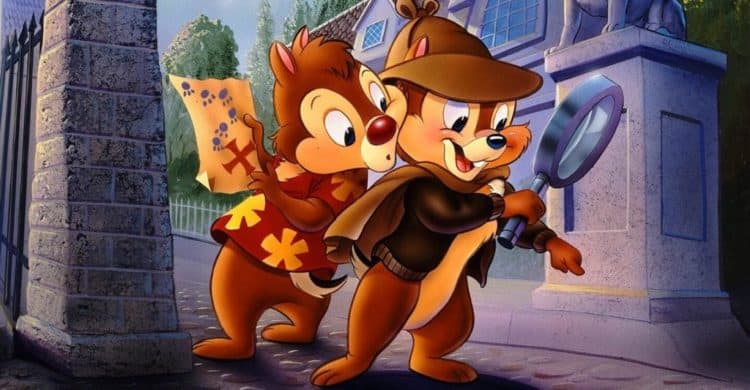 Did anyone else happen to hear the theme song in their heads when thinking about Chip and Dale Rescue Rangers? The popular cartoon that started back in 1989 is now coming to Disney+ as a hybrid live-action/CGI movie and a lot of fans couldn’t be happier since this was one of the more enjoyable cartoons back in the day even if it didn’t always make the most sense. Maybe that’s why it was so popular since it was about chipmunks, two mice, and a fly solving crimes and continually butting heads with a character named Fat Cat and his cronies and a human scientist that was absolutely nuts. Yeah, that’s something that kids can lock onto and consider cool, and for those of us that are now older and can remember the cartoon, it’s even better since we’ll likely recognize quite a few aspects of the movie. Another great fact about this project is that the original voice actors will be taking up their roles again a Chip, Dale, Gadget, and Monterey Jack will sound like their old selves, which is absolutely great since they helped make the cartoon in the first place. What the movie won’t be doing apparently is telling an origin story as was seen in the original cartoon, but will be taking on an adventure that will likely entice the fans to watch and parents to possibly turn their kids on to the idea if they haven’t found it already.

What’s really amusing about this show was that it was almost like Sherlock Holmes meets Magnum P.I. meets Laurel and Hardy since you can’t deny that Dale’s choice of shirt kind of brought the whole Magnum thought to the table while Chip’s look and detective work brought the Holmes aspect. The comedic quality of the show was great since the two chipmunks didn’t always get along that well and were constantly at odds trying to figure out how best to solve a case. Obviously, Dale wasn’t the sharpest tool in the shed since he was kind of a dimwit now and then, but he was definitely useful and he was Chip’s oldest friend as far as anyone knew since the two of them had been together for far longer than the show had been on. If anyone remembers they used to quarrel with Donald Duck back in the day on the Disney channel. Gadget, Zipper, and Monterey Jack were add-ons that were appreciated since Gadget was the individual responsible for the Rescue Rangers’ mode of transportation, an old bleach bottle with a host of additional options that had been added in and the means of flight thanks to Gadget’s contributions. She was also the team’s conscience more often than not since she wasn’t an aggressive character, but she was very strong-willed. Monterey Jack on the other hand was definitely a strong and aggressive character and was very world-wise since he’d been around for a while. But his weakness for cheese often managed to get him or the team in trouble since he couldn’t control himself. Zipper was kind of the mascot of the team but he did have his uses, and it’s hard to think of how the movie might bring him in since they would essentially have to make him a cartoon fly or make him a little more realistic, which could be a bit disturbing considering that this is going to be for kids.

It feels as though it might be best to omit Zipper or come up with a way to make him as appealing as the character was in the cartoon, but how that will happen is hard to say at this point. The plot of the movie is currently being kept under wraps as well, but considering that it sounds as though things are being updated to fit with the current time it’s fair to think that it will be every bit as entertaining as it was back in the day when the cartoon was one of many that Disney rolled out for the enjoyment of so many. It’s not certain just when the movie will be coming to Disney+, but at this time it does appear that the idea is that it is coming without any doubt. It’s also a wonder as to what’s going to happen with the team since it was kind of understood that there might have been a bit of a relationship between Chip and Gadget, leaving Dale kind of on his own in the relationship department, even though the group functioned as a team more often than not and didn’t focus a lot on who liked who. That might have been a little too much for a kids’ cartoon at the time, but there were a few hints of romance here and there, sometimes for comedic effect. But as far as the movie goes it will be nice to see the team back in action.