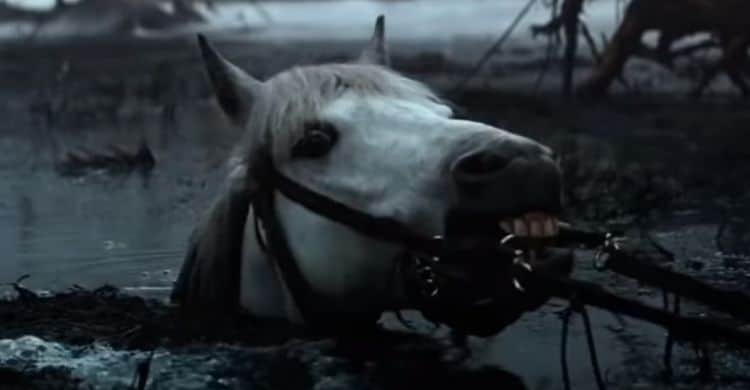 If you weren’t crying you were cringing and if you weren’t screaming then it’s fair to say that you were somehow immune to some of these images as a kid since they were haunting in a lot of ways and absolutely depressing in others since this is the kind of material that people remember as kids in the most negative of ways. Those that have watched Artax sinking into the swamp or E.T. lying on the cold ground probably felt the tears try to well up again since these were hard moments in cinema to watch as a kid. Then there were the moments that were absolutely horrifying such as Raiders of the Ark when the main bad guys melted or blew apart. Watership Down was by far and large one of the most disturbing animated movies of all time since it didn’t really spare much and went for the gusto when showing the violence and blood that could occur. How in the world did we not grow up traumatized by some of this stuff? Some folks might say that they were, but in reality, their trauma might be caused by something deeper since if you grow up seeing a shrink because of the entertainment you were exposed to then I hate to say it, but you’re a little too weak-minded for the world.

Entertainment can be cute and cuddly and completely safe to absolutely horrifying and so dark that one can’t help but wonder just how the censors didn’t take the material off the air or out of the rotation the moment they saw it. Some people would agree that some of this stuff needs to be taken off because it’s simply too difficult to push on kids and it’s bound to traumatize them at some point. But the risk of limiting or censoring anything at any given time is that when the kids do finally grow older and start to experience the material that’s been kept from them for so long, one can’t help but blame themselves for not getting the kids ready for what they’re about to see as an adolescent and then an adult. No one is about to say that it’s alright to sit the little kids down and give them nightmares while watching Freddy Krueger or Jason Voorhees dicing people up. There’s no need to terrorize children by allowing them to witness some of the most impressive gore in the movies or exposing them to some of the saddest or most lewd scenes imaginable. But it is a good idea to explain to kids what they’re watching, that it’s not real of course, and that it’s okay to feel emotions about different scenes and empathize with fictional characters.

Of course, Artax sinking into the swamp was sad, and it’s okay to let kids believe this. Telling them that the horse was just fine later on though is a good idea since Atreyu and Artax show up again at the end of the movie. As far as anything animated goes it’s a good idea to remind kids that it’s a cartoon and that it’s not real. If they ask if hounds do in fact kill rabbits then don’t shy away from the subject and admit that yes, this can happen, and then explain the reason behind it. Kid’s aren’t dumb in any sense of the word since when nurtured and given the proper tools to learn with, and given the type of experience and guidance that they need, they can easily weather just about anything when it comes to entertainment. Look at those of us that are in our 30s and above, we survived some of the most traumatizing entertainment that’s ever come along and we’re fine. Right? Okay, maybe some of us are a bit off our rocker, but the majority are doing just fine and don’t have any lasting trauma when it comes to the type of entertainment we’ve seen throughout our younger years.

Personally, it was more traumatizing to realize that pro wrestling was faked than it was when Charlotte died in Charlotte’s Web, or Artax sank, or when the Thugee priest was holding a burning heart in his hand. But it’s a personal thing really, and while some people might think that it makes a person a sociopath to be okay with a lot of these things and not blink, the truth is that some folks internalize a lot of stuff from a young age and learn how to deal with it in their own way. There’s more than one reason why a lot of us can look back on these moments and laugh now since saying that these moments ruined our childhood isn’t entirely accurate, but it’s enough to joke with as we have fun remembering just how devastated some of us were when we watched some of the most traumatic moments in entertainment.