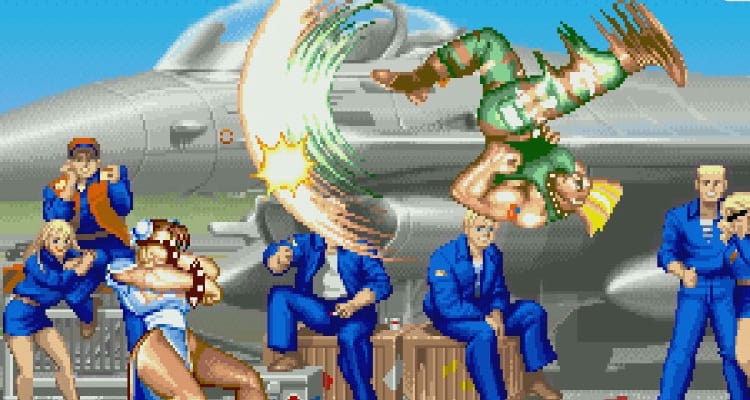 Street Fighter is definitely one of those games that got people pumped back in the day and still does with some folks since it’s a great game for taking out one’s aggression in a non-violent manner, at least insofar as the violence is taking place on the screen and not in real life. The cover for Guile is easy to pick out since they don’t do a lot to it except beef it up in this video and give it a little more punch. As a character Guile is someone that you might have liked or hated in the second game given that he’s somewhat tough to get the hang of and can be extremely tough to beat if you’re not aware of his moves and skill set. Obviously he’s been kind of left behind at times since he’s not THE best character in the game but is still someone to consider since his moves are pretty cool. But then again, a lot of people still prefer Ryu and other characters that have unique moves, like Chun Li, Honda, and various others. Heck, some people even like Ken better, but I was always a Blanka person, gotta love that lightning attack.

Guile is a character that people kind of have to work up to like since he is cool and does have a killer set of moves but he’s also a character that was created to appeal to American fans so that they would have a local boy to root for. Pretty much everything about him is stereotypical American though, from his fatigues to his tattoos, which technically have been criticized for their positioning in the past. His hairstyle is pretty funky but it’s been accepted throughout the length of the franchise and is a customary look for him at this time. Of course if you watched the Street Fighter movie with Jean Claude Van Damme and Raul Julia you obviously didn’t see the Muscles from Brussels sporting the customary hairdo in the movie. Of course Van Damme has always been kind of particular about what he does on screen, which is likely why he lost the part of the Predator years ago. But to be fair, the hairdo is a bit much and might have been a huge distraction since in the game it’s all well and good, but in live action it’s kind of nuts to assume that some things will work.

That goes for the moves as well that some of the characters perform since in the game they do manage to do some insanely impressive things that many, if not most people in this world would never pull off, and would rarely if ever be of any use in a fight outside of a movie. Guiles massive somersault kick would be picked off by a skilled fighter, as would most of the moves executed by the Street Fighter characters since a few of them are highly impractical and very high-risk. Even in the game they don’t always work perfectly if playing on a harder level or against an opponent that knows what they’re doing with their character. In other words Guile is cool and all but he’s just as susceptible to being overwhelmed as any other character since he’s not the strongest. His theme has been one of those that is easy to recognize among fans and his moves are among those that are the most enjoyed by some but all in all he’s not the most legendary character of the bunch largely because, well, he can get kind of boring after a while.

This is more of a personal standpoint since after learning Guile’s moves it becomes less interesting to try to master him than it would other characters that have more devastating or even more interesting moves and are a little more popular when it comes to the overall game. Some might disagree and find Guile more appealing and more fun to play but it’s a matter of opinion of course and everyone has one. Within the Street Fighter ranks though he has had his glory and he does have a lot of fans still but there are more that enjoy Ryu, Chun Li, and even Cammy are over him in some polls. There a LOT of Street Fighter characters however and each one has people that prefer the character for one reason or another, be it their moves, their back story, or even their music. Guile’s music hasn’t changed all that much but this video did credit to it since it gave the theme a little more oomph and created something that would be great to hear on one of the games if such a thing were to ever happen. It’s likely he’ll continue to be a part of the game but at this point he’s definitely one of the veterans.