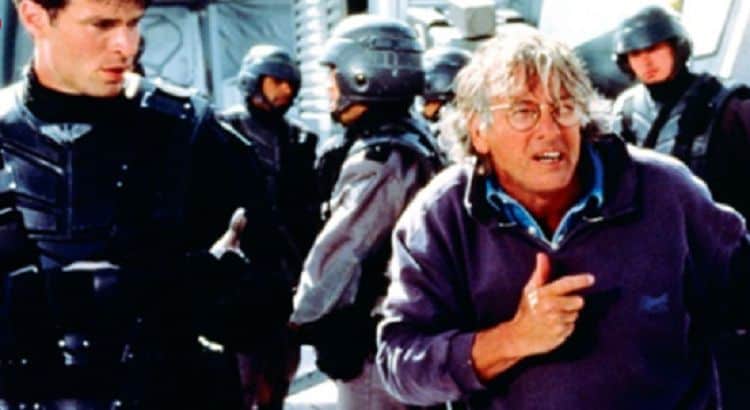 So let’s just say that technically a director shouldn’t be trying to surprise their actors on purpose all the time, since there needs to be a good line of communication between them in order to keep a good working relationship since this goes into making an effective movie that people will want to watch. But when Paul Verhoeven was questioned by one of his actors, Dina Meyer, on the set of Starship Troopers, he performed a gesture that effectively silenced the actress and made it clear that he wasn’t asking them to do anything he wasn’t willing to do, within reason of course. The scene that Dina was asking about came when the recruits were in the communal shower after a hard day of training, meaning that men and women alike were in the shower, something that a lot of people might have had an issue with but didn’t really throw up a public outcry over. But where it became kind of awkward for Dina was when she asked why the scene was necessary, since likely she was wondering why so much nudity needed to be used in the movie. When questioned, Verhoeven stripped down to the buff in front of Meyer and everyone else, showing that he had no trouble doing anything that he was asking her to do. Since Meyer had nothing to add to the conversation at that point apparently she walked off, and the scene went on as planned and in truth, it wasn’t a bad scene since those that wanted to see a couple of women topless got it but also had to realize that it wasn’t being made into a big deal.

As mentioned it was a communal shower. There was nothing sexual about it since everyone was there for the purpose of getting cleaned up and when one of them started to ask about why people were there, several of them obliged by stating their reasoning for entering the service. In fact, if anyone was really paying attention it might have been disturbing to learn that one of them joined up so that she could have children, which was easier to get a license for after serving in the military. Think on that for a moment, and realize that she mentioned needing a license to have kids. It’s definitely an interesting idea when thinking of some folks, but it’s still abhorrent to think that reproduction would need a license to take place. One guy couldn’t get into college and therefore took the option of serving to fund his education, which is pretty positive, and the guy asking the questions wanted to be a journalist, so it made sense. But overall, the scene wasn’t sexual apart from the fact that everyone was naked and baring it all for each other. But Paul definitely made it known that he wasn’t adding in the scene to show gratuitous nudity for the sake of it. In a way it was a smart move since it would have kept everyone on point, no puns here I swear, and thinking about the scene and what it would take to get through it, not the fact that they were naked together in a shower.

This is the kind of scene that might have raised a lot of alarms in a lot of other movies since being naked in front of each other tends to unnerve a lot of people, especially when there’s no reason for it. But in this scene it was smart since the key members of the unit that were being focused on were all in the same space, they were all vulnerable in the same way, and as a result, pulling them together by creating a reason for the scene to exist was an intelligent way to go about it. True, Verhoeven probably could have worked this scene somewhere else, but the manner in which it was accomplished still feels smart without really taking into account the fact that the actors were naked. If you’re still fixating on Dina Meyer and the other women in this scene with their tops off then you probably need a moment to get past that, since the scene was about finding out the motivation of each character, and it worked quite well, right up until the conversation came to Rico, who didn’t feel like talking at that time. That was okay though, a lot of the audience already knew why he joined up, and only a part of it was to do his duty as a citizen. For that reason, it made things a little easier to believe when his high school flame, Carmen, ended up breaking off their relationship via video message, without any chance for him to respond in real-time. But hey, he still had Ace to kick around, remember?