Home
Movies
A Dr. Seuss Cinematic Universe Will Begin with Cat in the Hat Movie 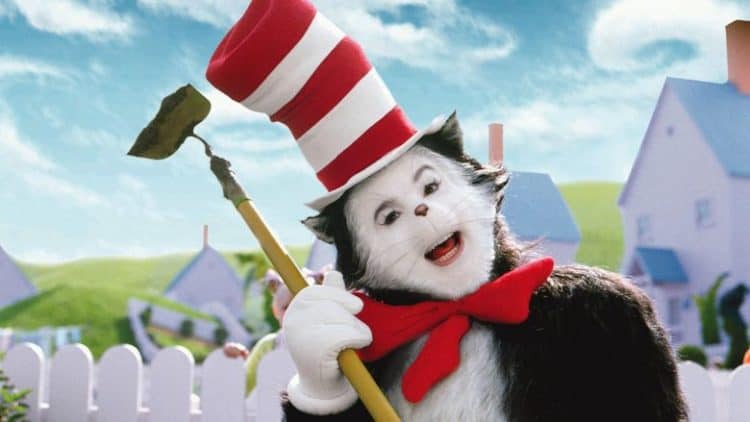 Animation definitely appears to be the way to go when it comes to creating what is already being called the Seuss-iverse, a cinematic experience where the works of Dr. Seuss will come to life in the way that people are likely hoping will be enchanting and not altogether creepy like the version pushed with Mike Myers as the lead. Be honest, that was just downright wrong in a few ways since it came off as more than a little spooky. But an animated version of the classic works by Dr. Seuss would no doubt be far more appealing since it’s been seen with The Lorax and the animated version of Green Eggs and Ham that people actually do respond to these stories, so long as they’re not thrust into their face in a manner that’s sure to cause nightmares. There is something slightly magical about the stories such as Cat in the Hat and many others, as they tell a story with a lesson and a strong set of morals that a lot of folks in this day and age could really stand to learn yet again. There’s plenty of hilarity and over the top content as well though, since one thing that Dr. Seuss’ material usually comes with is a healthy helping of insanity that might be a bit off-putting to some folks but is still fun and witty to those that don’t see any issue with it.

It does sound as though The Cat in the Hat will be the first to come along and that it’s still a few years out, but the idea that it will be completely animated is nice since it allows the story to keep the same kind of wonder that kids are wanting to see and will keep the cheesy effects and nightmarish costumes where they belong. Just imagine if The Lorax had featured Danny Devito in an orange, fuzzy bodysuit with a bristly mustache that took up the lower half of his face. Yeah, if you’re shuddering don’t feel too bad since it gave me a shiver too. There’s a lot of stuff in the Seuss books that feels so out of whack that it would be disturbing, to say the least, if it happened or existed in the real world. But as it is within the books and within an animated world, things are indeed fun to watch and think about since it puts a different spin on the morals and ethics that many of us are raised to believe in since it takes us out of our own head and coaxes us to think about matters in a way that has nothing to do with us, but at the same time has everything to do with how we react to the world around us. It might sound a little sappy, but Dr. Seuss’s books have for a long time been a way to teach us how to be better people, so long as we listen and actually take the lesson from them.

That’s the whole thing, the books are a suggestion, a way to look at our world from the vantage point of a fantastical place that is entirely imaginary but carries with it the same life lessons that are so important in the real world. The idea to keep everything animated is less of a punch than the live-action version was since The Lorax might not have hit as strong of a nerve, but it was far more entertaining and it was definitely received in a better way than The Cat in the Hat since it had the comical lean to it as well as the heartfelt and very important message, but it still managed to have fun with said message and employed a great deal of humor that people really appreciated. Entertainment is a touchy thing sometimes since some people will respond well to one facet of the industry while others will demand something else that doesn’t conflict with what they wanted to see. In other words, pleasing everyone is pretty much impossible, but pleasing a certain portion of people isn’t as hard and can be accomplished if one is willing to disappoint another portion at the same time. That’s how Hollywood appears to run to be certain since there are plenty of people that will support one attempt while vilifying another, something that just about all of us are guilty of at one point or another.

Let’s put it this way, some folks actually liked the live-action version of The Cat in the Hat, while other people hated it. Some liked The Lorax, while others didn’t care for it. The point is that the animated versions of the Seuss books have gained a great deal of approval from a lot of folks, but it’s not bound to be universal love. Still, it sounds like a great idea.