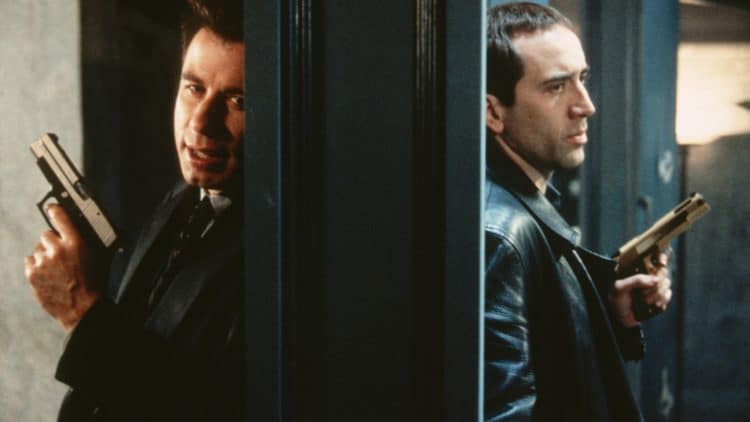 That same old question: Can Hollywood come up with anything new? is still hanging out there waiting to be answered, even if the answer tends to be ‘no’ on a good day. Ryan Reynolds and Hugh Jackman are both great actors and have contributed a number of great movies to Hollywood, so it’s hard to imagine why they would want to step in and try to remake something that was already great on its own. Face/Off was a different idea that some might want to argue took on elements from other movies and became its own creation through something that isn’t even close to being possible but is still an intriguing idea since it showed more than just the pseudoscience that people wanted to see, but also the utter obsession that Sean Archer had with Castor Troy, which was taken to the point that he knew just about everything about the villain that was humanly possible, except for a few key things, such as the fact that Castor had a son. The chemistry that Nicolas Cage and John Travolta showed on the set though is something that Ryan Reynolds and Hugh Jackman still need to work on apparently. Their ‘feud’ is rather amusing to a lot of people since they trade jibes back and forth and tend to say things that might make people gasp. But the whole idea of onscreen chemistry is something that the two really need to work on, or at least prove is there at all.

That’s what made Face/Off work in the first place since Cage and Travolta were able to feed off of each other in such a way that the movie felt as though it went as smoothly as it could given that they could each take on the persona of the other without that much effort. It wasn’t a perfect movie by any means, but it was definitely fun and had plenty of action that energized the audience and kept them wanting more. With Reynolds and Jackman, the potential is there since they’re both exciting actors to watch, but that onscreen chemistry could be a problem since it’s not certain whether or not it would work with egos as big as theirs and the fact that the ‘feud’ might still make its way into the movie. It almost feels as though it would be like watching Bill Murray and Chevy Chase trying to upstage one another in Caddyshack, only with a big action movie instead of a comedy. Plus, as I already mentioned, the fact that it’s not an original idea or even something that should be touched upon again is kind of off-putting since Face/Off was released in 1997 but it still feels pertinent to this day despite the fact that a lot could be done when updating the movie to the current era. It does make a person question though how much would need to be changed and just what would this do to the movie? Keep in mind that there were moments that PC culture might look at and frown upon, such as Castor Troy’s impersonation of a priest and his grabbing of a choir girl’s backside at the beginning of the movie.

There are so many other ideas out there just waiting to be utilized that it’s a wonder why Hollywood writers aren’t snagging them out of thin air or finding the time to develop ideas that have been in the loop for a while. Apparently this idea has been around for a number of years, but it’s been left where it should be, in development hell where it can languish since the original is still a high bar to reach and with all due respect, Reynolds and Jackman aren’t the ones to top it. Coming up with another idea that might pan out would be preferable but there are, for one reason or another, those that think that this would be a great idea and that stomping in to get this remake underway would be a great idea. With the hit and miss nature of remakes, it’s still a wonder why some folks are thinking that it’s such a great move to see if they can one-up the movies of the past and try to put their own spin on it. Granted, some remakes have done fairly well, but this feels like one of those times that something should be left the way it was without the need to go in and muck around with it. Plus, if the spirit of creativity is truly dead in Hollywood this is just one more way to prove it given that it’s an admission that people can’t think up anything else and are simply spinning their wheels trying to think of how to take an old idea and make it into something new.