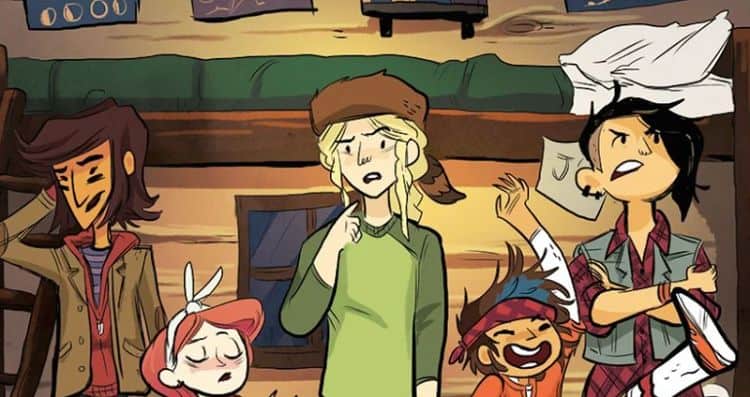 It would sound as though the Lumberjanes animated movie is finally making its way to HBO Max after being stalled since around 2015 and the idea of a camp for aggressive young women is something that sounds interesting, to say the least. When supernatural forces are involved though it’s likely that it could be a movie or a show, that might attract the attention of the LGBTQ+ community as well as many other fans that might find it intriguing. Why the project stalled in the first place is hard to say since there are so many reasons that something could fail to push forward, but the idea that it’s coming soon is bound to make a few people happy since the representation for the LGBTQ+ community is what a lot of people have been calling for and it’s even a part of the Academy Awards prerequisites now since the requirements have been changed recently, or have at least been recommended. One might think that the community has a good deal of representation across a few mediums, but some would argue the point and despite what anyone wants to think it’s important to listen to both sides and come to a compromise since like it or not, the LGBTQ+ community is rather large, and has many supporters, and also is not all about breaking down every norm in the book. Instead, the idea is to accept people for who and what they are and simply enjoy what each culture has to share with each other, rather than tear each other down continuously.

Each camper that’s shown in the show has their own unique skill and the idea is that they’re bound and determined to figure out the strange, supernatural happenings that are going on around the camp, which is an interesting premise that has the advantage of drawing from many sources for its inspiration and takes a few pages out of a few different books while creating its own narrative. The idea of using kids to figure out what’s going on is nothing new and in a way, it does kind of up the entertainment value since kids aren’t always seen to react as adults would, especially considering that many children tend to think on a different wavelength than adults, who often use reason and experience to sort things out rather than other methods that can be a little more fluid and often don’t, or can’t, rely on life experience that might help or hamper the process. It’s kind of funny how that works isn’t it? The more life experience a person has, the less likely they’ll do something that they know could be life-threatening, but the less life experience that is possessed, the more likely it is that they’ll want to explore and figure out just what’s going on. It evens out in some way, even if it’s hard to see.

Lumberjanes is just one among many stories that help to represent the LGBTQ+ community and it’s intriguing to see how some of these stories stack up in the mainstream since if anyone that’s opposed to the community or simply doesn’t like its values and beliefs would take a look at the shows, books, and movies that are representing it, they might be pleasantly surprised. Yes, the content is usually geared towards those that it’s trying to represent, much as the content of other movies and shows are geared towards the majority of viewers that turn out to see them, but the stories are still quite powerful in many ways and amusing in others when they need to be. Lumberjanes is yet another animated show that caters to a certain demographic that is looking for acceptance and the continued support of a society that they belong to and looks a bit hilarious in some regards. Simply accepting that this could and probably will be a fun and engaging story is best since what it all comes down to is whether the story is any good and whether people will want to sit and watch it. Personally, I’m here for the story, the content and the message behind it are all well and good, but if the story doesn’t work then one can move on and watch something they might enjoy. In the meantime, a lot of people might actually find Lumberjanes endearing and quite agreeable.

The whole group dynamic is great as well since it shows different emotions, feelings, quirks, and specialties that other characters might possess, but aren’t skilled enough to showcase on their own. Plus, the group can show inclusivity as well as acceptance of one another that is a big message that this idea appears to be pushing in a very meaningful way. Whether it’s seen to be a hit or not it’s definitely something that’s already gained a good deal of attention all on its own.