Home
Movies
A Martian Manhunter Movie is Being Developed 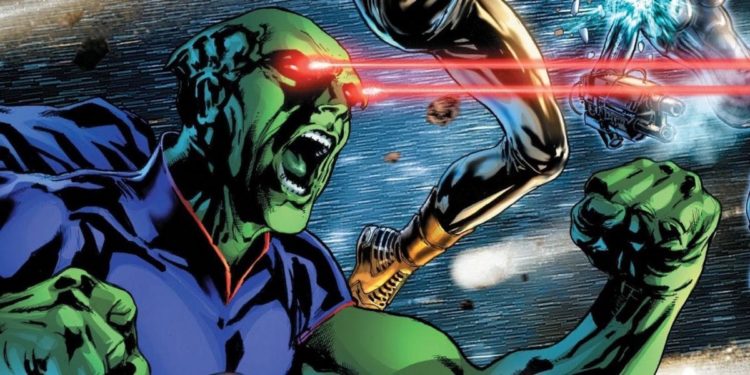 It seems like Martian Manhunter could have been added into the mix a lot sooner had the DCEU not been trying so hard to contend with Marvel, but at this point it does sound as though a movie based on the green-skinned alien is bound to be hitting the production table soon as Christian Bone of We Got This Covered has mentioned. One point of contention which really shouldn’t be is that J’onn J’onnz, his actual name, will be played a person of color. This isn’t that big of a deal really since that’s how it’s been on the CW and quite honestly there’s no reason to get worked up about it. There’s a chance that someone might throw a fit but thankfully it will probably be easy to ignore while moving forward. The character was hinted at in the Man of Steel movie, as his disguise as General Swanwick was apparently confirmed to be his cover and that he was keeping an eye on Superman. That’s kind of interesting really and it does seem that Snyder was ready to out him during the Justice League in the Snyder cut. As a lot of us are guessing at this point though that’s never going to come to light it would seem since a lot of folks are getting tired of hearing about it.

MM’s role on his home planet was basically that of a police officer, though his twin turned to the dark side and became responsible for a plague that wiped out their people. During that time MM was brought to earth, where he eventually assimilated into human life and acted like one of them as he integrated into society. Throughout his time in the DC universe he’s undergone a great number of changes and has interacted with a large number of heroes and villains. Among the many heroes that exist in the DC universe he’s actually one of those that can give Superman a pretty good fight, which means he’s insanely tough and has abilities that can allow him to take on a wide array of heroes and villains alike. How the movie will address his origin and his life on earth is going to be interesting since there’s a lot of material there to use and not enough time in a motion picture to really go through it all. Much like Superman and several other DC heroes though he does have a wide selection of powers and abilities that make him one of the most over-powered individuals around and someone that you would think might be able to take down pretty much any villain with ease. He does have one very glaring weakness however, and despite the fact that it’s been addressed throughout his history and even partially if not fully conquered, his fear of fire is something that a movie should probably to into and try to exploit.

Producer Charles Roven was quoted as saying this during the emergence of the Justice League movie:

“I wouldn’t necessarily say that I would rather do that character, because we know that there is going to be aÂ Flash movie, we know thatÂ AquamanÂ is being done, I think thatÂ CyborgÂ deserves his own movie too, and I know that the fans are out there screaming forÂ Green Lantern, that’s for sure. But I was always a fan of J’onn J’onzz, Manhunter from Mars.”

It’s pretty obvious that the Martian hero’s presence on the CW has been inspiring a lot of people that would like to see him come to the big screen finally, but the question that remains now is whether or not he would get a standalone movie or if another hero would be joining him along the way. Given that he’s been a solo act and part of a team it’s hard to say what those in charged would want to do since to DC fans there’s no doubt that he deserves his own movie, but those casual audience members that might not know as much about him might need to be guided by another hero, or even a well-known villain to see just who Martian Manhunter is. It might even be an enticing idea to bring back Superman for a short part in the movie, or as a supporting one, in order to push it just a little to make certain that people could get behind the idea in a big way. To be honest, there are enough fans of the DCEU that might be able to push the box office numbers to a desirable level, but at the same time it might be safe just to assume that he’ll need someone else there to act as kind of a safety net to make certain that the movie is successful enough. The hero deserves a movie, but as DC has already seen, even the most powerful and well-known heroes can’t always catch a break.