Home
Movies
A Paranormal Activity Reboot Is Coming: Do We Really Need It? 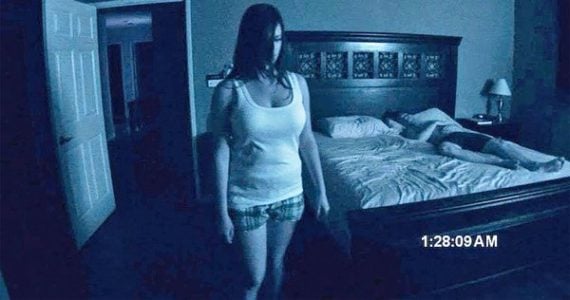 By now, I think everyone knows about the Paranormal Activity movie franchise. How many have they made so far? I’ve honestly lost count, but that really means they’ve made one too many. In my opinion, there was no need for a sequel. Well, guess what? It’s reboot time for the Paranormal Activity franchise and I just cannot help but wonder if it’s really necessary. I mean, I don’t think anyone’s asking for it and the last movies didn’t get the best reactions from fans and critics. So, my question is, do we really need a Paranormal Activity reboot?

First of all, let’s go over who’s helming the upcoming reboot. Directors Christopher Landon and William Eubank will be teaming up to helm the reboot, while Jason Blum of Blumhouse Productions and Oren Peli are returning to produce. The Paranormal Activity reboot will be released on March 4 of 2022. Okay, so I will say that this project does have a good crew behind it. William Eubank was the director of the 2020 film Underwater, which was a good horror flick.

Christopher Landon has some experience with horror movies as well, but it’s not the scary type. He’s directed the two Happy Death Day movies and the recent Freaky with Vince Vaughn. The black comedy slashers aren’t exactly the same tune as the Paranormal Activity movies, but they’re certainly capable of giving us some scares. If the man can combine genres like that and make it work, he’s worth contacting for this reboot.

Okay, so it’s simple physics, because if you want a good horror movie, get directors who have made good horror movies. Christopher Landon has directed one of the Paranormal Activity movies, the 2014 The Marked Ones, which I don’t remember watching. I do know that it has a thirty-nine percent rating on Rotten Tomatoes and even lower critics and fans scores on other rating sites. Okay, so maybe Christopher Landon already failed to deliver on a good Paranormal Activity movie. However, I did enjoy Happy Death Day. No, I haven’t watched Freaky yet, but I heard it’s good and it’s on my to-watch list.

Christopher Landon and William Eubank are competent directors with the horror genre. After their recent successes, I’m confident their combined minds can give us something worth watching. And let’s also keep in mind that Oren Peli, the original creator of the franchise, is coming back. With the famous Jason Blum once again returning to assist them, I’d say this reboot is in good hands.

Okay, so they have a good team, that’s step one. Now here’s where I think the problem comes into play. The Paranormal Activity movies always thrived off of using intense jump scares. I will say, they used them perfectly in the first movie. Heck, I remember watching the first one in the theaters back in 2009 and hearing a lot of screams. The screams were warranted because it was legitimately scary. The way that couple were peacefully sleeping in their bed, then you’d hear the heavy footsteps slowly coming up the stairs, and then brief silence. After that, you knew what was coming. It was just a matter of selling the jump scare in the moment and the first movie pulled it off. They did it not just once, but multiple times and managed to scare us each time.

The first Paranormal Activity took every little kid’s worst fear and made it into a successful movie. As a kid, didn’t you fear that some monster was lurking under your bed or in your closet? You’d lie in bed and be afraid to go to sleep because that monster you thought was in your room with you would eat you at anytime. The first Paranormal Activity movie took that common fear and sold it. Heck, that’s exactly why it was turned into a franchise. Honestly, though, it’s one of the franchises that keeps running the marathon after the marathon’s over. Actually, last I checked, there were six movies and all the subsequent sequels after the first one received significantly less positive reviews.

Now again, I don’t remember which one I left off on, but there’s a reason why I haven’t been keeping up with them. How many times can you keep milking the jump scares? After watching the sequels try and repeat that formula, it got old very fast. And what I loved about the first Paranormal Activity is that it really worked with the mystery of the monster. Whether it was some kind of ghost or demon, we never got a full explanation as to what the monster was. On top of that, we didn’t even know why the monster was terrorizing that particular couple. However, there was no explanation needed. The mystery of not knowing anything about the monster was a big part of the fear factor and that’s what scared us.

Didn’t the sequels actually explain more about the demonic spirit? That’s why it possessed the girl and kidnapped her sister’s baby in the second movie. And I’m pretty sure the sequels after that revealed that there was some kind of cult that were behind the whole thing. Hence, the marked ones. Like I said, I didn’t keep up with the movies, so my recollection of the story is rather hazy. Now that I think about it, I remember leaving off with the one where the two sisters from the first two movies were children. Their father was killed and their mother was possessed by the demonic spirit and they left the house together. Yeah, all freaky stuff, but once again, it kept milking the jump scares. It worked on us the first time, but by then, we were used to it.

If you look at certain horror movies nowadays, you’ll see that they don’t even need jump scares to be scary. Paranormal Activity made the jump scares popular again, but it also overcooked it. Movies like It Follows, The Babadook, The Blair Witch Project, and even Hush, a horror movie with no demonic spirits or ghosts, managed to keep us afraid without relying on jump scares. That’s a formula that horror movies should follow. This Paranormal Activity reboot will probably stick to the jump scares, which is fine, but they need to find a way to make it different from before. Honestly, I don’t know how they can, given on how familiar we are with their jump scares, but if this reboot can do it, I’ll watch it.