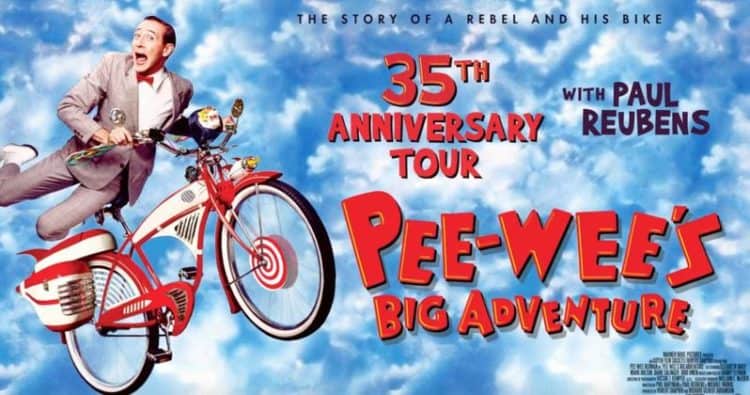 Some fans might actually be divided in how popular Pee Wee’s Big Adventure still is since some of them have grown up and moved beyond the movie in a big way, while others will admit that it was insanely funny for its time and is still a cult classic. Personally it’s still a movie that’s on my list of things to watch when I’m feeling nostalgic, but there’s no denying that seeing it through adult eyes is a lot different than seeing it as a kid. Jeremy Dick of MovieWeb and several others have announced that Paul Reubens will be making the rounds as the movie makes its way back to several theaters this coming February as it opens up in Portland, Oregon and culminates when it hits Washington DC in March. One of the best parts about this tour is that Reubens will be on hand to watch the movie with the fans and will be able to answer questions following the movie detailing what went on behind the scenes and how certain effects were created. Even if you can’t attend the event though there are plenty of ways to find out what went on behind the scenes since there are a number of sites that are capable of letting whoever wants to know in on those particular secrets.

Think back if you can and try to remember everything that made this movie interesting or at least feel kind of kooky. Did you happen to know that Cassandra Peterson, aka Elvira, was the Biker Mama during the scene in the biker bar? There was also a picture of her displayed in the magic shop that Pee Wee visits earlier in the movie. There are a lot of different hints and bits of trivia that exist about the movie and some of them might actually make you remember the movie in a different way since they were all cleverly hidden or shown in a way that made it kind of hard to focus on them since there was so much going on. In a way the movie was almost like Pee Wee’s Playhouse lumped together in one big attempt to make the audience laugh instead of spread out over many episodes, and for some people it worked since the gags were great and the humor was juvenile but still enjoyable in many ways. For others it was just too much to take and the idea of it was so corny that trying to get into meant lowering your IQ a little too much. It’s true that the movie wasn’t made to be intelligent, it was a comedy and Tim Burton’s directorial debut. It was also Danny Elfman’s first time scoring a major motion picture, so there were a few historical firsts that this movie is responsible for.

The movie is kind of ridiculous really and very juvenile but that was the point. It wasn’t supposed to be too serious and it certainly wasn’t meant to be a classic movie it feels like since it was something fun and light that was given to the fans to enjoy, not put on a pedestal and thought of as one of the greatest movies of all time. In fact it didn’t really do all that well to start with but it’s become a cult classic over the years and has endured even after Reuben’s fated misstep in the theater that landed him in so much trouble. For a while no one wanted to know about Pee Wee Herman since they thought Reuben was a pervert but after a while the press died down and he finally had the chance to be someone to look up to again. Since then the movie has been one that people still think about from time to time and get a good laugh out of since it is funny in many ways and it does offer a chance to remember what it was like watching it as a kid and being impressed and amazed with some of the things that Pee Wee did and experienced. Tanya Pai of Vox has more to say on this matter. After all the view of his home and how he lived was kind of interesting, but it does make a person wonder what in the world he did for a living since all the stuff he had and the home he lived in had to be kind of expensive.

But those aren’t exactly things that a kid would think about when watching this for the first time since from Pee Wee’s toy-strewn bedroom to his strange but fun and engaging home to the bike that was one of the main factors of the story this movie was something that you couldn’t help but laugh at since a lot of it was ridiculous. It’s fair to say that nothing after this movie really did quite as well though the whole idea of Pee Wee Herman has been one that is still endearing after all this time.