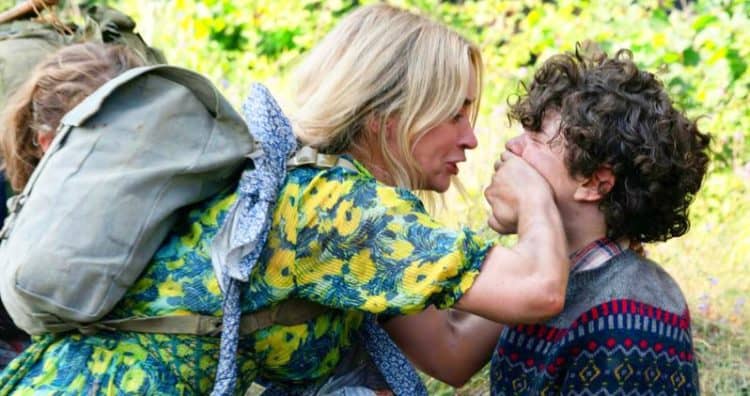 It’s with a little bit of trepidation that looking ahead to a spinoff of A Quiet Place, which is being called A Quiet Place III, for now, is being developed with filmmaker Jeff Nichols at the helm. There’s nothing to say that Nichols is the wrong guy since he’s convinced many people that his movies are worth watching, but rather, it’s the idea of continuing this premise in a manner that might thin it out too much and perhaps ruin the desire for it. Right now A Quiet Place is big thanks to the sequel and the original, and it’s not bound to slow down any time soon as far as anyone can see. But the hope is that things will remain this way and that Nichols will see the sense in not changing up the story too much in the interest of keeping to the idea of a post-apocalyptic world where creatures that hunt according to sound are only one of the dangers to be had.

The result of humanity losing whatever tenuous control it has over fate and even everyday life is illustrated well in many movies and TV shows. The world becomes chaotic, unpredictable, and no matter how much order is instilled by certain individuals and groups, it’s still a very different and less comforting place as cinema shows us. But tacking on the presence of aliens usually makes things harder since as it’s been made abundantly clear in a lot of movies, humans simply don’t stand a chance against evolved life forms, no matter if they’re bestial or a little more civilized. In this particular movie, the undeniable nature of the creatures, and the fact that not a lot is known about them, makes the movie even more terrifying, but of course, that can’t be it, since the second movie also reveals that pockets of humanity have devolved into feral versions of themselves, doing whatever it takes to survive. During the end of the world, it’s pretty obvious that humanity tends to fall apart in a big way.

But the revelation that the creatures can’t swim is a huge advantage that the humans possess, at least until the intelligence of the creatures is revealed as one of them boards a boat and allows it to drift to a nearby island where a colony has been maintained. The second movie has definitely upped the ante just a bit, which means that a spinoff is going to have to do the same, but keep things on a manageable level to make certain that it doesn’t go so overboard that it becomes a joke. It would be nice to learn more about the creatures, but given that much of what they are has been hidden away for the past two movies, it’s easy to think that trying to reveal something like this would be akin to George Lucas finally telling everyone where Yoda is from and his entire backstory. Sometimes being able to get away with less while still being able to tell the story is better than having to ruin it all.

But it does sound as though there are other spinoff ideas for A Quiet Place since this is a worldwide event that occurred in the movie, the human race has dwindled to so few that what’s happening in other countries might as well be happening on another world. This story has a lot more to it to be certain, but how far it’s going to go is anyone’s guess since it does sound as though John Krasinski has plenty of ideas for it, but who will take each movie is hard to say. Plus, taking it too far definitely sounds possible, but trying to keep it on an even keel and tell the story that people want to see could be difficult as well without revealing too much.

However it ends up going it does feel as though it might one day become just another franchise that might be well-liked by the fans, but might need to end at some point. Right now A Quiet Place is a hot topic and the story is able to continue moving on as much as those in charge want it to. Seeing where it might go from this point would be interesting just to see how the rest of the world is handling the issue, and to see how other folks have been managing to survive. There are a few different ways to go with this idea, and it’s intriguing to start thinking about them, and how the creatures might possibly foil whatever plans that people might make. Even the frequency that was set up in the second movie might not be enough after a while. But like always we’ll have to wait and see what happens, at least until 2023 when the next movie is supposed to release.