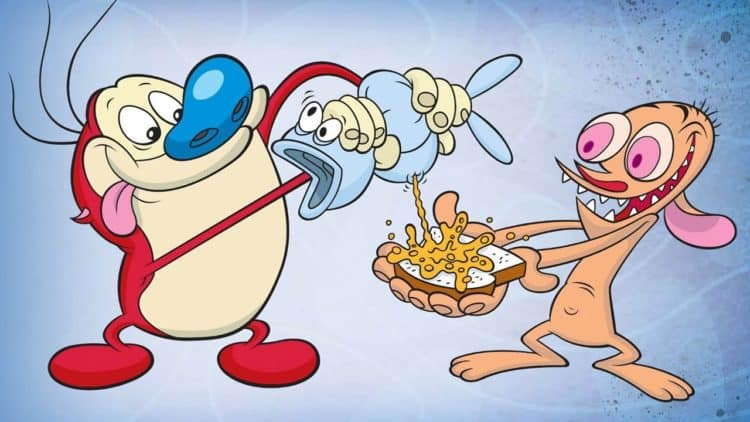 In the history of gross-out humor, there are several shows and movies that come to mind when thinking about the most epic ideas that have ever come along, and for better or worse, Ren and Stimpy is one of the many that sparks a very poignant memory. When it comes to being gross and even controversial this show was nearly at the top of the ladder, so to speak. If you ever watched the show then you’ll know that this is true since a good portion of the show is little more than a chance to gross out the audience using one gag after another. But on the upside, this cartoon isn’t necessarily meant for kids and will be featured on Comedy Central where it can mix among the other adult-themed animated shows that are bound to keep people entertained and coming back for more. Anyone that remembers Ren and Stimpy might still be a tad bit traumatized when it comes to remembering the type of material that made this show so popular. Back in the 90s, they were edgy, they were great, and somehow they were still marketed to kids that might not have fully understood every joke the duo were forced to push. They might never have been meant for kids, but the strange and temperamental duo was still glorified as characters that kids emulated and happened to love.

To say that they belong only to adults feels wrong in a way since despite their ill humor and adherence to some of the nastier aspects of the cartoon industry one can’t help but think that Ren and Stimpy aren’t much worse than some of the actual animated shows that are being pushed to kids these days. There’s not a lot of indication that the show will be changing that much since to do so would likely erase a good chunk of the material that people find endearing. It’s hard to know how to feel about that really since, on one hand, the show is perversely funny, especially in a very gross and disturbing manner. To be fair though it’s not so bad that kids should be banned from watching it, so long as parents understand that it’s on them to explain just what’s going on and why certain things are funny. Some parents might find it less than appropriate for kids, but the point here is that while it is a cartoon, the craziness both is and isn’t tolerable to a young mind that hasn’t experienced the kind of things that might be seen on the show.

What’s funny is that if a kid can watch Spongebob Squarepants, then Ren and Stimpy shouldn’t be considered to be that bad. Seriously, if anyone can watch a talking sponge navigate his own show then a talking cat and chihuahua aren’t much in the way of competition when it comes to suspending disbelief and good taste, since Spongebob and several other cartoons that exist today aren’t exactly paragons of virtue and good taste. There’s no need or desire to attack any show, but a fair comparison is definitely in order since if anyone hasn’t guessed already, there are bound to be those that might see the re-emergence of Ren and Stimpy as less than desirable. But thankfully there’s this wonderful function that every modern-day TV comes with, it’s called ‘changing the channel’. Of when it comes to streaming, one can simply not watch one selection out of the hundreds that exist. Simple, right? We’ll get to see just how that works in a bit since Ren and Stimpy are coming back following a documentary on the show and its creator and how things went south in a big hurry.

There’s no denying that the show created a bit of stir and a lot of controversy in its time since it was one of those that really didn’t care what people thought and went full-steam ahead with its own ideas. People are even now wondering if this is a good idea to bring such a show back, but a lot of folks are reminding the naysayers that without Ren and Stimpy, the cartoons they know and love today might not have had a chance to emerge. There are always pioneers when it comes to TV and movies, and whether they’re accepted or vilified, they tend to become well-known throughout the industry in one way or another, or in many ways at once. Ren and Stimpy were known for being gross, controversial, and in many ways the kind of program that you wouldn’t want your grandparents watching, let alone your kids. But a lot of us watched it all the same and laughed our butts off when we weren’t staring at the screen trying to figure out what we were seeing. Those days are coming around again.