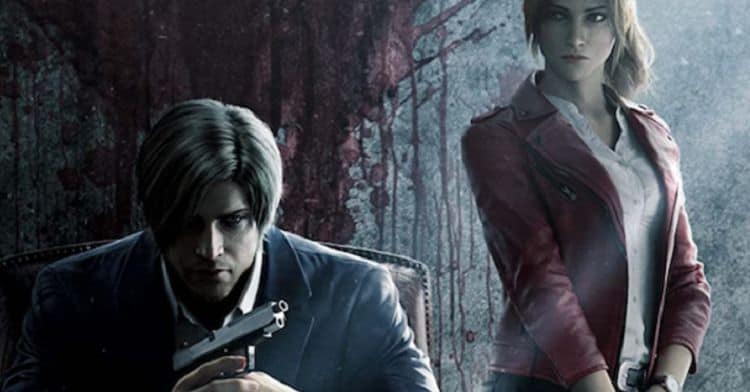 So far Resident Evil: Infinite Darkness looks like a return to form when it comes to the scares and chills that were delivered with the first Resident Evil live-action movie, even if this is CG. The story of Resident Evil has definitely angered a few fans over the course of its release and looking at how the story has gone it’s been hard to keep up with simply because things have gotten crazy to the point of being absolutely ridiculous. In fact, zombie movies, in general, have had to get so nuts as they’ve continued to adapt that watching a zombie get up and run just isn’t enough for some folks any longer since now the zombies run, they think, they organize, and they act like a bunch of undead ninjas given that they’re somehow shambling around but are still stealthy as all hell. While the zombies in this trailer aren’t exactly sprinting or jumping about as they do in the upcoming Army of the Dead and even in the Zombieland movies, they’re certainly doing everything they can to appear as menacing as possible. Heading up the coming series are Leon Kennedy and Claire Redfield, two names that a lot of fans should know by now and will hopefully be a little bit inspired by since the story is likely to change it up again as a series will no doubt bring new ideas and characters to light.

To be honest it wasn’t too surprising to hear years ago the continual discord that fans threw at every Resident Evil movie that came after the first one with Milla Jovovich and Michelle Rodriguez, especially since the first movie in a franchise is bound to be a little more accepted unless it’s just a rolling dumpster fire, which the first Resident Evil really wasn’t since it took a part of the game and really shook it around like a dog trying to get as much as it could from the experience. But the resulting movie was still a lot of fun and had several moments that fans absolutely loved since it was about zombies and worse creatures, and it featured a swiftly rising star that took over the lead role of the movie and did pretty good at it throughout the first outing. After the first movie though things kind of went a little wild and it’s fair to say that a lot of people, usually those that had never played the games, were lost and didn’t really understand what was going on. It didn’t really help that people were given the impression that, at first, Resident Evil felt as though it would remain as a standalone movie, regardless of how it ended.

But as the years have gone by more and more movies have been made concerning the franchise and while the effects have continued to increase, the story has suffered quite a bit, and that’s the hardest part to watch, since allowing the story to languish while the merchandising and marketing and everything else thrive makes little to no sense. Without the fundamentals, the story tends to fall apart, and this is what Resident Evil has been suffering from for a while since it does feel as though the fundamentals were lost somehow. But if things get any better during this CG version then it might be time to consider keeping Resident Evil within the computer realm just because it’s more effective and people probably won’t gripe about it as much. Well, they might gripe about it too after a while. That all depends on how the series goes and what it will be covering since if there’s one thing that Resident Evil fans are bound to watch for it’s some form of continuity with the games, even though when taking into account how much there is within each game it’s nearly impossible to get it all. There might be plenty of recognizable moments and Easter eggs here and there, but it does feel as though the series is going to be something that will do its own thing and pull from the Resident Evil playbook while at the same time trying to entertain the people in a manner that’s consistent with Netflix’s standards and the parameters of the writers that will be working on the project.

Resident Evil is one of the several franchises that has been followed for years now, before the movies and animated shows, and the fans are, as you can guess, very particular about what they want to see. So far it feels as though Infinite Darkness might actually be worth a look, and it’s fair to say that some people might have plenty to say about it in one manner or another. If nothing else, it’s another entry into the franchise that will make money, and that’s a win.