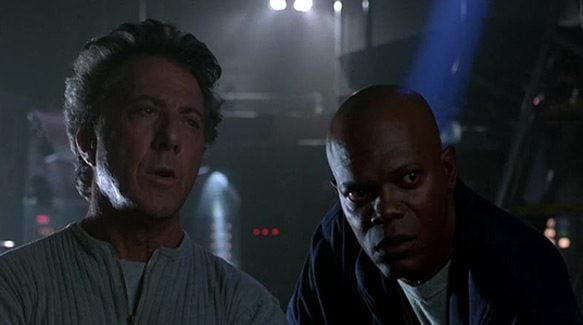 The first question to ask when thinking of a Sphere TV show on HBO Max is ‘why?’. The second question, if you couldn’t guess, is ‘why in the hell?’. If you’re confused by either question then you might need to read the book by Michael Crichton again since the book was a mind-bender that was nothing but great since it took the reader along an existential road that a person couldn’t help but keep walking since it led somewhere that was nothing short of impressive and ultimately self-revealing considering that it was enough to blow just about anyone away. One thing about Michael Crichton is that his writing is very technical and he tends to get bound up in computer readouts and factoids that are otherwise kind of hard to read if a person isn’t used to such a style. But his storytelling is quite astute since it does grip the reader and keep them flipping one page after another since there’s nothing else to say for it but that he knows how to hook a person and get them interested in the subject. The thing with Sphere though is that it’s a singular story that doesn’t really feel like it would fit the idea of a series since it would become too much like a sci-fi series that would drag on and on without any end in sight when the story had a well-defined beginning and end that’s hard to think about when it comes to an ongoing series that might need a lot more content to keep itself busy.

A person can try to wrap their mind around the idea of creating a series out of just about anything, but this one of those standalone stories that might not be bad as a miniseries in order to get the overall feeling of the story and make sure that nothing is missed. But anything other than that feels like a disaster just waiting to be made since creating a series out of this story feels as though it might water it down, which is funny for those that know of the story since it took place underwater. The whole story centers on three scientists that are sent to explore the properties of a strange, alien craft that’s been located on the bottom of the ocean and has apparently been there for around three centuries. It’s interesting to think that our world has been the landing spot for so many alien species in fiction, isn’t it? The thing about Sphere is that the ship containing the alien artifact was sent back in time, though it becomes obvious that this knowledge was lost since there’s no mention of this throughout history, as the craft remains a well-kept secret. Our imaginations make it possible for us to elevate ourselves and put humanity back in its place by reminding us that on the evolutionary scale we’re apparently not the end result and a far cry from the pinnacle of evolution. That’s made even more apparent in this story since the sphere is something so advanced that it takes a truly enlightened mind to control it, while any mind can cause a response from the sphere that might be construed as good or bad.

This is a case of when the movie really fails to capture everything that the book managed to convey in such a short time since to be fair, Crichton’s book made it clear that the human imagination is something powerful enough to inspire or destroy, and as it’s seen in the movie things just kind of fly off the rails at the first instance, creating a financial flop that didn’t have a lot of redeeming qualities despite the fact that it had a great cast to work with and a story that was one of the most intriguing of its time. This is the unfortunate disconnect that happens between movies and books too often, and it’s the type of happening that frustrates a lot of fans since Crichton’s stories have been used more than once in the past, and one of them, Jurassic Park, went on to inspire a great number of people and create a great franchise.

But Sphere is best left as a standalone movie and I’m thinking that several people might agree, if only because it does have a set ending and beginning. The only way to make this into a series would be to try and explain how the ship and the sphere came to be, and possibly if anything was left behind after the resulting explosion that the three main characters set near the end. Anything else would surely be kind of hard to explain since trying to make this movie into a running series would be enough to make one think that it wouldn’t last past a single season. Maybe I’m wrong, but it’s a feeling all the same.