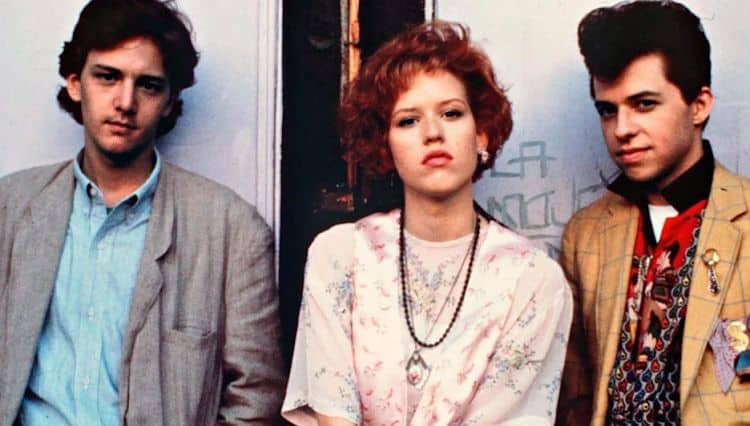 When Pretty in Pink was released in 1986, no one could have imagined that it would eventually go on to become one of the most well-known movies of the decade. Featuring a cast of young and (at the time) up-and-coming stars who became known as the Brat Pack, Pretty in Pink became relatable to a wide audience of teenager viewers. Those who have seen the film will likely remember the film’s final scene which takes place at prom. The movie ends with a classic ‘guy gets the girl’ moment, but even Pretty in Pink’s biggest fans may not know one hilarious detail about the film’s final moments.  Continue reading to learn a funny secret about the ending of Pretty in Pink.

The Ending Of Pretty In Pink

One of the things that made Pretty in Pink so interesting is that the main character, Andie (Molly Ringwald), had two great guys who were interested in her which left her with a pretty big choice to make. Originally, the movie was supposed to end with Andie deciding to be with Duckie (her prom date). However, when this scene was showed to test audiences, they weren’t really feeling it. As a result, John Hughes ended up re-writing the ending so that Andie ended up with Blane. This ending has generally been more widely accepted and many people can’t imagine the movie ending any other way.

When asked how he felt about the scene being changed, Jon Cryer, who played Duckie, told Entertainment Weekly, “I was disappointed. You sorta go, ”Oh, guess I’m not the leading man.” But I think it was kind of appropriate. Duckie always thought he was the leading man, and that was his fatal flaw. I got it at the time. I understood that John was trying to do something about crossing class lines and felt that with the ending as it was, it was sort of saying, ”You know what? Class lines aren’t worth crossing.” And he didn’t want to send that message, because he deeply cares about rich people and about the problems that rich people face. [Laughs] He didn’t want us poor folk to give up on them completely.”

In 1986, a book was written based on Pretty in Pink. It was released before the final scene was changed so it still ends with Andie and Duckie together.

The changed ending isn’t the only secret about the final scene of Pretty in Pink. Andrew McCarthy recently revealed something that only a few people would know about the end of the movie. During an interview, Andrew shared that he was cast to do a play in New York shortly after filming for Pretty in Pink was over. As part of the play, he shaved his head in order to play a marine. When John Hughes and Paramount decided that the final scene needed to be re-filmed in order to accommodate the new ending, it was clear that something had to be done about Andrew’s hair.

According to Yahoo, Andrew said that he was given a “cheap” wig to wear while re-shooting the ending.  Andrew added, “the wig did a lot of the work for me. It made me look very forlorn and unhappy. It just sat on my head’s like a bird’s nest!” Needless to say, the wig may have been cheap, but it certainly got the job done. Now that you know he was wearing a wig, you might want to go back and watch the final scene and take an extra close look at Blane’s hair.

What Made Pretty In Pink So Special?

The entertainment industry is constantly moving and changing which means that there aren’t many projects that are able to withstand the test of time. Pretty in Pink, however, has managed to stay on people’s minds for the last 35 years. Although it’s hard to say exactly why the movie has remained so special after all of this time, it probably has a lot to do with the fact that many consider it a perfect depiction of teenage life in the 80s.

There’s something about watching the characters deal with the typical ups and downs of high school that resonated with young viewers when the movie was originally released. Now that the movie’s target audience is well into their 40s and 50s, many of them simply find Pretty in Pink to be full of nostalgia. Even younger viewers have found themselves drawn to the movie, and that will likely continue to be the case for many years to come.