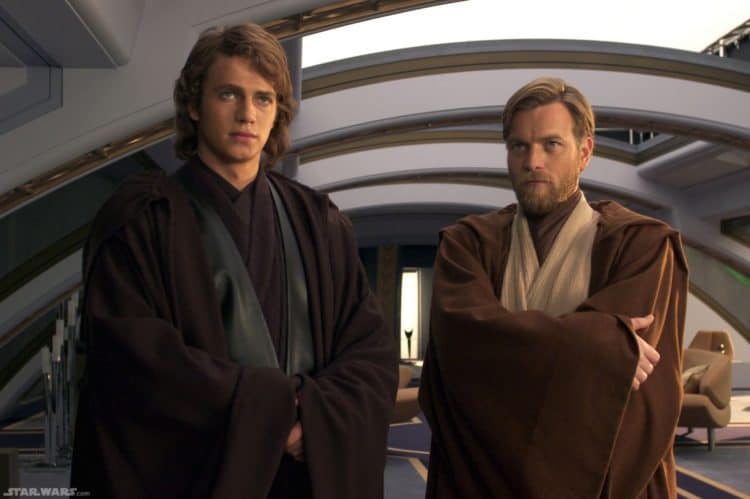 Just getting into this, can anyone imagine a Jedi getting wasted? Imagine the liability if such a thing were to actually happen, especially with a Force-user getting fast and loose with the Force. Something tells me that the Jedi High Council wouldn’t look too favorably upon that, but it also feels that as though such a thing could have happened in the Star Wars universe at one point and no one would have known about it. Maybe that’ sone more path to the dark side? Weekend at Obi’s certainly puts a different spin on the whole idea of the Jedi since normally when one thinks of the Jedi they think of lightsabers, robes, and the legendary patience of a monk since the Order was known for instilling a sense of calm and patience within their members, qualities that not every Jedi had but which were prized among many. Weekend at Obie’s kind of takes that and flips it on its ear by making Obi-Wan and Anakin into party boys that don’t have a lot of inhibitions when it comes to seeking a good time. But like all clips that have been dubbed from various movies, it does make a person laugh to think of how the story could change with a few strategically-placed words and phrases that make things appear far different than they were in the movie.

Of course one of the best parts of the movie in Attack of the Clones comes when Obi-Wan ponies up to the bar for a drink since it shows that the Jedi are obviously not above taking a sip here and there of something a little harder than water or anything non-alcoholic. When thinking of the monastic order it’s usually easy to come to the understanding that they don’t partake of the same libations that others do from time to time since again, thinking of a drunk Jedi is kind of difficult even though it has been depicted in a couple of stories in the Legends canon, and it’s rarely a benefit when dealing with the Force. In fact, the Jedi Quinlan Vos was seen to be a bit intoxicated at times, and Cade Skywalker, a character that’s been abandoned in the Legends canon, was a fan of death sticks, the same things that a bar patron tried to sell to Obi-Wan. So intoxicants aren’t a big deal in the Star Wars universe since they’ve been introduced and spoken of more than once in the history of the franchise. Spice, which is what Han Solo and Chewbacca were running for Jabba the Hutt, is one of the more powerful intoxicants in the galaxy, and to be realistic, some substances that are harmless and do nothing for some species are seen as intoxicants for other species. That’s the thing about creating characters with different physiologies, different substances will have different effects.

But speaking solely of humans in the franchise at the moment, Jedi are also a bit different since their attunement with the Force enables them to resist certain things that can happen with their bodies as their level of physical and mental discipline is often great enough that getting drunk or staying that way might not last, especially if a Jedi is powerful enough. The Force can actually help a Jedi detoxify their body, since alcohol is a toxin, and allow them to stay clear-headed while imbibing large amounts of alcohol. Likely as not a Jedi will still get drunk if they’re not disciplined enough, but at the same time, it does sound like a great way for a Jedi to gain the confidence of other beings when trying to lay low and blend in. This was obviously something Obi-Wan was trying to do in the bar when he and Anakin were looking for Zam Wessel, but it’s been stated that the Jedi Order frowned upon padawans and even other Jedi being intoxicated that often, even if it was more of a guideline than an actual law. Just imagine a Jedi without the needed discipline but a strong connection to the Force getting drunk and being crazy like a hardcore partier. That might get a bit messy, especially if they decide to whip out their lightsaber and start performing party tricks. Thankfully the Jedi are usually a lot more disciplined than that and aren’t seen to enjoy anything that can really mess them up that often.

That does leave kind of an interesting question as to what might happen if Anakin was to get drunk since his discipline kind of wandered at times as it was seen in the movies. It does kind of feel as though he would be a mean drunk, someone that would gladly let his past demons out to roam in a way. But maybe it would have been different, who knows?