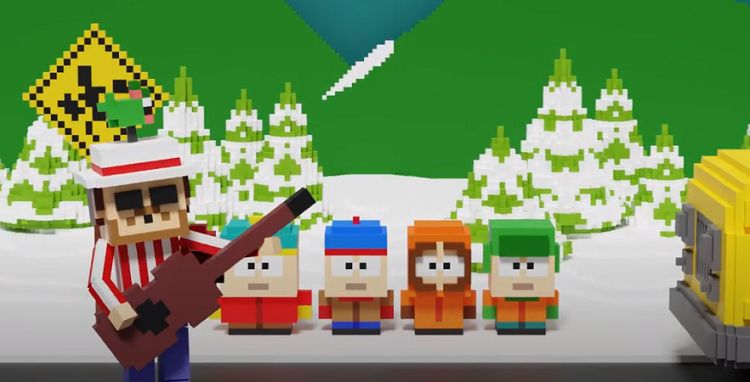 This is certainly a different way to look at South Park and Minecraft for that matter. One has to wonder why both brands have never come together like this before, though the ability of people to work together is sometimes an iffy thing that doesn’t always work. Still, it’s enough to wonder why such a collaboration might not have happened, but there are bound to be a few explanations for it that would work since when a person really thinks about it, not everything has to be combined in an official manner, but it’s kind of fun to think of what they would look like if they were. That’s why fans are so great sometimes since they tend to think up stuff like this if the creators of other properties don’t.  And usually, so long as the fan making the stuff up isn’t looking for profit or is at least willing to follow the rules and not try to rip off either idea, it can be spread around for people to enjoy. If you’re wondering, South Park has spoofed Minecraft, which may or may not be different when thinking about collaborations, but was likely able to make a lot of people laugh since Trey Parker and Matt Stone tend to spoof anyone and everyone that they can since their attitude has been and still pretty much is that they’re going to do what they want.

More than one person has wondered over the years just how many lawsuits the creators of South Park have had to deal with in response to their use of materials that some might feel are protected or aren’t allowed to be used in the show. But as it’s been seen, however many lawsuits there have been since people can’t agree on the number, Parker and Stone tend to win more often than not since their use of the material that is in their show is protected and as brainless as the show appears to be at times the creators are pretty intelligent and know what they’re doing. It makes a lot of sense considering how long they’ve been creating new episodes for people to enjoy and how little they appear to worry about using the names of various people. If anyone wants to state that they’re using the actual likeness they might need to back up a moment and realize that not only is this a cartoon, but it’s a very simplified cartoon that uses the loosest of caricatures that are hard to be offended by. And even if a person is offended, there’s this nifty device called a remote control that can help to navigate away from the program in order to not see it.

What’s really funny is that despite their desire to showcase as many famous people and ideas as they can in their show, Parker and Stone aren’t out to ruin anyone or harm their reputation any more than a spoof movie might be trying to do to one of the many movies it might be parodying. The idea that people might be harmed by humor is kind of funny in and of itself since there’s no doubt that some humor is beyond the fringe and goes right into offensive territory, but unless it’s actively harming someone’s reputation then there’s nothing to be done for it save to just keep moving forward and deal with the fact that someone found a way to earn a living by creating something humorous that might not be someone else’s cup of tea. South Park has been a long-running show that has angered quite a few people that don’t feel that it adheres to the values and social mores that a reasonably moral society should aspire to, but if that argument is going to be made then any given society at this point should probably take a good look in the mirror to make sure there are no hypocritical stains on their morality that might otherwise negate their arguments. South Park might not be a lot of peoples’ idea of great humor, but thanks to the fact that humor is a very personal thing, it doesn’t really matter.

Given all the shows and movies that South Park has parodied over the years, it’s easy to think that this simple little clip would be let go by a lot of people as something that’s just fun to see. It would be an interesting way to see the show since it would be quite different and might change the whole dynamic of it at one point. South Park has been around long enough to be the kind of show that is bound to be seen as influential in pop culture and thereby able to be influenced from time to time since what goes around comes around after all.