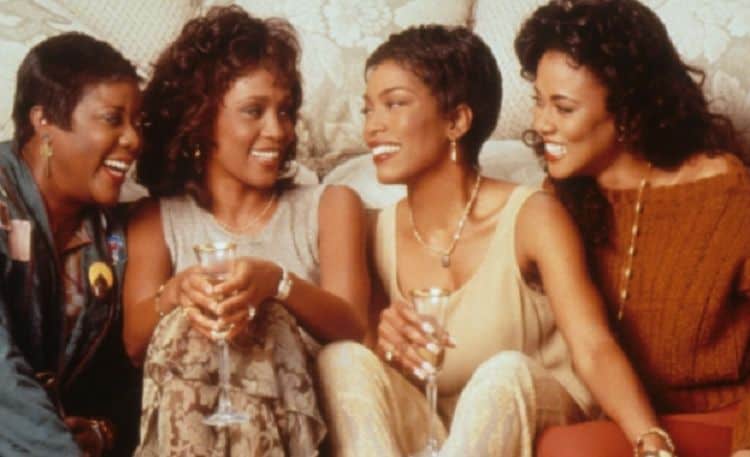 A Waiting to Exhale TV series is bound to be highly anticipated by some folks and is enough to elicit an eye roll from many others since let’s face facts, it was a touching movie about female relationships and the empowerment of women of color in particular. But has anyone ever took the time to look into the relationships that were described in the movie? If there was ever a men-bashing movie that was smothered with humor in order to take away the sting, this would be one of them since from the perspective of the women in the original movie it’s easy to see that most men are either manipulative, weak, nasty and basically the kind of guys that the woman like to begin but find out are almost useless later on. In this manner, it’s easy to see that men in this movie weren’t about to get a fair shake since while it’s not necessarily feminist in nature, it’s definitely a dig at men when it comes to relationships and who’s typically at fault, or who’s in the right when they react, whenever a relationship ends. One woman torched a guys belongings and car at the same time and didn’t suffer any repercussions for it, so that kind of tells you that the movie was made for women since it’s depicting them as being able to pine for the ‘right’ man while getting one over on the guys that hurt them.

A counterargument to this is that the men had it coming since they were in fact kind of horrible and did manage to hurt the women that they were with in some fundamental manner. But it also feels that in some way if the roles were reversed that the men would still be in the wrong since that’s usually how a drama goes unless the women in the movie are just that godawful when it comes to who they are. Typically there will be a reason that will ensure that the men will still have to be understanding and kowtow to the women in some way, but the hope is that this coming series won’t be a long line of episodes that see men having to bow and scrape to win the favor the stars since if one really wants to take a count of how many women in the original movie were innocent, only one is going to stand out in a big way. The woman whose husband left her for a white woman is definitely a jerk, while the husband that was bisexual but apparently found out he was fully gay might deserve a little more understanding in this day and age, but it still feels as though he’s been held accountable for simply being who he is, which in today’s environment probably wouldn’t be as easy to justify when it comes to the woman’s reaction. A series of Waiting to Exhale really needs to go back to the drawing board since to be a balanced and fair story it would help to show that the women aren’t exactly angels to start with, apart from two of them maybe. But the fact that two of them were mistresses, basically leading a secret life with married men, makes them about as complicit in the affair as the men. But that’s not usually how people want to remember this story.

If we’re all being honest, and it’s easy to say it since the men in this story have already been shown to be less than trustworthy in several cases, with a few exceptions, but the women are apparently not at fault for this and are able to reunite with friends over wine, stories, and make everything better as they reconnect and make it known that there were reasons that they did what they did. Hopefully, the TV series will seek to make the women a little more accountable for their own actions and still show the important connections between them since the empowerment angle is important, but in this day and age, it’d be nice to see that everyone is being made to feel the pinch for the things they do. Balance is one of the many things that would be nice to see in some stories since in tales such as this the perspective that’s being taken is one of the main points, but it would still be interesting to see what might happen to see the women take responsibility for everything that had been done, not just learn from their mistakes before moving on. It could be a decent series and one that people will fully enjoy, but a healthy sense of balance, meaning those that are at fault for their own actions would take the blame and then move on, would be nice to see.