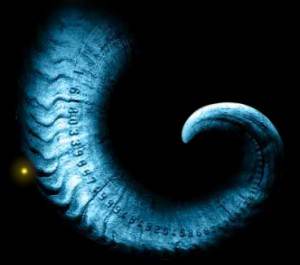 I still think that “And Those We’ve Left Behind” is paying homage to Lost somehow. It certainly sounds like a Lost episode, especially conjuring up memories of “Because You Left,” season 5’s premier episode in which the island erratically bounces around in time. The Lost title refers to those who left the other survivors on the island, but in Fringe it seems we’re always leaving someone behind in another universe and/or timeline. So the question is, did Peter leave his timeline behind or did the current “Amber” universe leave him behind?

The time hiccups that Peter experiences remind us that time is not linear, at least not in Fringe. All of time exists at once, even though most people can experience only one point at a time. But Peter moves back and forth among various points, even jumping between time lines. And the Observers, of course, can see all of time at once. Let’s explore this idea by considering an often used image in Fringe: the spiral.

But first, how did Peter leave his “world” (his timeline) in the first place? In the final episode of season 3, did he really disappear? Or did the other timeline suddenly appear before our eyes, making it seem like Peter vanished? Did Peter continue existing in the other world? Did the others continue existing? I’m curious to see how all of this is going to be explained, and eager to offer a brief theory here.

In season 4 of Fringe, not only are there multiple universes, but also there is more than one timeline. If we look at each timeline as a Fibonacci spiral (based on Walter’s favorite series of numbers) and each rotation on each spiral as a universe, maybe we can visualize what’s going on here. There are two universes that we know about in the original timeline and possibly many more. Do the parallel universes exist just across the spiraling line from one another? Like the locations that the Fringe team discovers on the map, where the time irregularities are occurring, maybe all of existence can be mapped out based on this perfect ratio.

In the upcoming episode, “Wallflowers,” perhaps we will learn more about how these time lines are related to one another and what it means for Peter to be existing here and not there. Did he really “leave behind” anyone? Or has everything been permanently changed, like the Observers told us in the finale episode of season 3? Is there only one spiral or two?

Thanks for reading! Check out my new book on Fringe here .