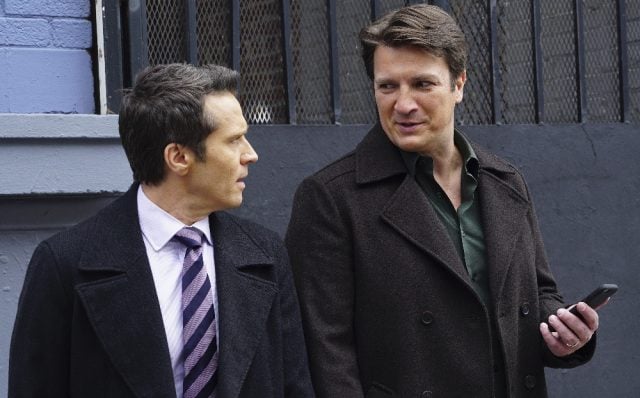 YesterdayÂ Deadline broke the silence on what previously has only been alluded to. Â One of the points for actor Nathan FillionÂ to agree to do aÂ Castle season 9Â was for them to fire his co-star Stana Katic. Â  For many that certainly brings up issues of male arrogance and ego, and perhaps even vindictiveness – but that’s a lot of supposition. Â Individuals don’t always get along, and people do stupid and selfish things. Â  As a person who was not on set I’m not about to guess about why these demands were made. Â Besides, that’s actually not the sexist part.

The sexism here is thatÂ ABC fired the co-lead, whom the show owes half of its success to,Â in order to sign Fillion. Â  In ABC’s calculations, they believe doing thirteen more episodes in a Castle season 9 will be worthwhile. Â Unfortunately, there are some things they left out of the equation.

Just to be clear, this is how the show has been marketed for the last eight seasons: 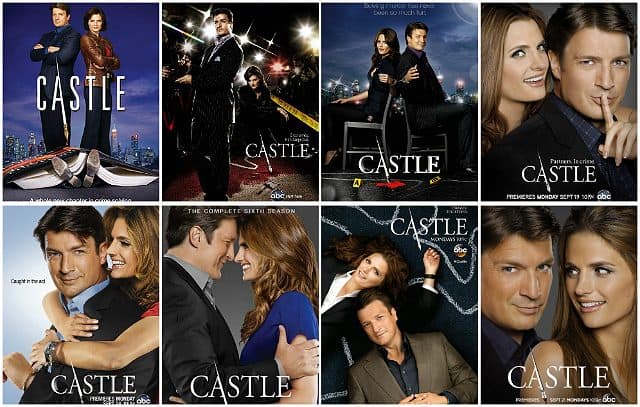 The Key Art advertising for the last eight seasons of Castle

Looking at the formula that has made the show a success, it’s obviously not Fillion or Katic that’s the magic ingredient. Â  What drew viewers in and kept them is, “Caskett” – the combination Fillion & Katic make playing writer Richard Castle & Detective/Captain Kate Beckett. Â How on earth do ABC executives think they are going to sell Castle, without Katic’s Beckett, to the audience that fell in love with Caskett? Â This is a marketing nightmare – and for what? Thirteen episodes?

For thirteen more episodes added to the show’s syndication numbers ABC is willing to trash eight seasons of fan loyalty – well, really seven seasons. Â According to The Hollywood ReporterÂ ABC had plans to get rid of Katic for season eight. Â Being that ABC needed to so for Fillion to agree to a Castle season 9, it stands to reason that this was a request before. Â It certainly explains much about the strange ending of season six and creator Andrew Marlowe stepping down as showrunner. Â Season seven began the strange practice of trying to keep the leads apart and give more screen time to Fillion’s character. Â It also marks the beginning of the first serious ratings drops for the show. Â (Prior to season seven CastleÂ was known for it being astonishingly steady in the ratings. )

The eighth season of Castle has gone on to have the lowest ratings of the series. Â  This is likely because the plotline has been bizarre and un-Castle-like. Â  It embraced the worst elements of season seven: keeping the leads apart on-screen even more than before, and bringing back the, “Castle P.I.” concept. Â Then it introduced a new plot called “LokSat” that attempts to add yet another layer to Johanna Beckett murder case – which was wrapped with great satisfaction in season six. Â Worse of all, Â in the second episode of season eight, the new showrunners,Â  Alexi Hawley and Terence Paul Winter, split the couple up that had just finally gotten married in season seven. Â Viewers and critics alike were completely baffled as to why this was done – and the fans were furious!

More disturbing than the breakup has been what now can only be seen as the deliberate attempt to deconstruct the past seasons and destroy the character arc of Kate Beckett. Â The entire LokSat story that the new showrunners have put forthÂ is illogical and ill-fitting to the past seven seasons. Â Even within its own eighth season arc the points of this story don’t add up. Â That’s because LokSat didn’t just separate Castle and Beckett. Â It set out to paint Beckett as a woman who, “likes being broken” rather than the woman viewers had watched transform her life from a tragedy to a triumph – both personally and professionally.

In the review for Castle, “Much Ado About Murder – just prior to this news coming out – I’d been addressingÂ the misogynistic tones and themes that Castle season eight has taken on. Â It hasn’t just been with Beckett, but with women overall. With Hawley and Winter signed on for Castle season 9 viewers can expect more of the same frat-boy humor, derogatoryÂ commentary about women, and illogical plots that we’ve seen in season eight.

Castle is no longer the show that Marlowe wrote. Â His CastleÂ showcased an equality and balance between the sexes – a balance that is highlighted in the season seven finale “Hollander’s Woods.” Â  Written by both Marlowe and writerÂ Terri Edda MillerÂ (Marlowe’sÂ sometimes writing partner, but always wife), the episode highlights the strength of the Caskett partnership. Â In particular, it shows Beckett as a completely emotionally healed woman who is able to stand by Castle’s side and support him the way he had supported her. Â In retrospect, I’m positive most viewers wish that, “Hollander’s Woods” had been the series finale.

Instead, ABC has chosen to go along with this sexist agenda that season 8 has presented. Â On the heels of the mess with Kelly Ripa, this doesn’t look good for the management. Â It suggests that ABC doesn’t value strong independent female characters, nor the viewers that love them. Â Yes, viewers. Â While the appeal of Beckett to women in that 18-49 demo is high, the appeal she holds to men is up there as well. Â From the letters to TV Guide, the polls, campaigns, and general social media storm, it’s fair to say ABC has upset a lot of viewers – for 13 episodes.

Castle is well over that magic number of a hundred episodes that is a hallmark for syndication – and it went into syndication even before it hit the hundred mark episode. Â Of what use are these 13 extra episodes going to be if no one wants to watch the series? Â That’s the thing ABC is missing in their accounting. Â Season 8 – and this possible season 9 renders the rest of the series unwatchable. Â ABC is owned by the Walt Disney Company, so you would think that this company, out of all the networks, would know the value of ending with, “they all lived happily ever after.” Â CastleÂ has been marketed as a grown-up fairytale, and now that the princess is queen of the castle they plan to kill her. Â Isn’t that seriously off-brand? Â It’s certainly not the kind of thing that makes good box office – or good television.

When looking at the big picture, the idea of ABC renewing Castle for another season has more liabilities than assets. Â Forget about the blatant sexism these decisions show. Â If ABC renews Castle for a season nine the only legacy they will have from this, “legacy show”Â is how they let one actor lead them around by the nose – and straight into a brick wall. Â As it stands, the changes made to exit Katic have crashed the ratings. The best thing ABC could do right now is to announce the show’s cancellation.

Supposedly ABC will announce their decision about Castle today. Â Let’s hope they choose to end the series. Â A Castle season 9 will do worse in the ratings than season eight and break viewers hearts, but most of all, the damage to the ABC/Disney reputation will last much longer than thirteen episodes.