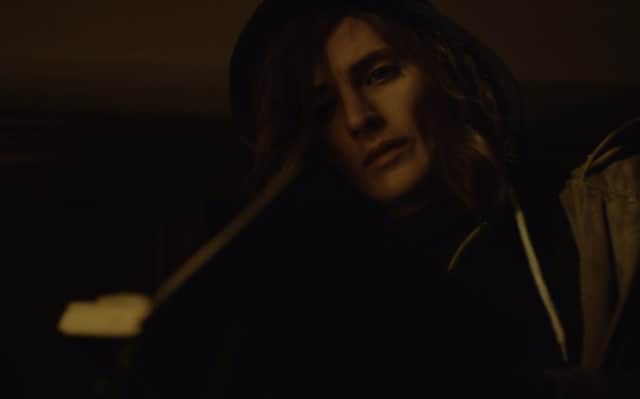 In Absentia episode 3, “The Emily Show,” director Oded Ruskin – with actress Stana Katic as his Ingrid Bergman – shows true mastery of Hitchcockian suspense. Â Granted, from that era Katic looks more like a cross Â between Audrey Hepburn & Sophia Loren. Â However, if you’ve seen the Alfred Hitchcock films Spellbound and Notorious you know I’m not talking about her physical appearance.

The reasons Bergman in these films came to mind in terms of Katic are two fold. Â First is the congruence of Â their abilities to express so many varied emotions via facial expressions. Â The second reason is the kind of characters Bergman played in those movies. Â For those who haven’t seen the films, the quote below is from an article by Diana Bosch, who runs the classic film blog Flickin’ Out.

Alfred Hitchcock’s “icy blondes” have become synonymous with his style of storytelling. But a focus on those characters is limiting of the kind of creator he was because you ignore an era of his filmmaking that features a slew of strong, confident women possessing a different hair color: the brunettes. The 1940’s brunettes weren’t dogs or fragile women; they were beautiful badasses. But one of these actresses stood far above the rest: Ingrid Bergman.

With Absentia, yes, there’s also a similarity of topic in the repressed memory issue that’s in Spellbound. Â Â Thus far though the story structure is tighter than that film was. Â The influence of Hitchcock on Absentia – especially for The Emily Show – goes far beyond that single movie.

First of all, the very structure of Absentia, the “double-chase” of Emily trying to find out who took her while being pursued for a crime herself, is a storyline used in many classic Hitchcock films. Â Yet this idea has become such a standard structure we rarely think about the rich tradition it stems from.

In fact, most of our modern thriller/mystery films, and even our procedural television shows, owe a debt to Hitchcock. Â However, despite this debt to him, we don’t consider every film or TV show that uses that structure to be Hitchcockian. Â That’s because a narrative alone isn’t enough to evoke the feel of a Hitchcock film. Â There are many things that need to come together to do that. Â Â In Absentia episode 3, the nods to Hitchcock were beautifully done to create an episode that displays a distinct modern day homage to Hitchcock.

The Building of Suspense

Even if you aren’t much of a film buff you probably knew Alfred Hitchcock is famous for being the master of suspense. Â It certainly helps to have great actors involved in creating it, and the actresses in his films were all exceptional. Â However, like all truly great films it wasn’t just a single performance that made them shine. Â It takes a team: actors, composers, artists, writers – and directors. Â The directing choices made by Ruskin pulls the audience into long tracts of suspense involving dangers and emotions for several characters.

There’s one sequence with Katic that’s so intense that I personally had to stop the player for a minute to calm down and breathe! Since I don’t want to spoil that part of the episode I won’t point out all the nods to Hitchcock that are in it. Â However, you might want to look at some of the artwork from Hitchcock’s film Vertigo….

Other scenes, like watching Emily and Special Agent Nick Durant (Patrick Heusinger) breaking into – and out of – a crime scene, use some of Hitchcock’s classic voyeuristic techniques to keep the audience on edge. Â Using several long shots the camera lets us scan the room and then watch Emily and Nick taking photos of a crime scene Â – as they watch the police officers patrolling outside. Â Â Will they be caught? Â As they run out of frame the officers come into it from a distance – with no clue they’re being observed.

The above scene is something we’re used to seeing in a thriller – and you can thank Hitchcock for that. Â However, he’s also considered to be the master of melodrama.

The Use of Â Melodrama 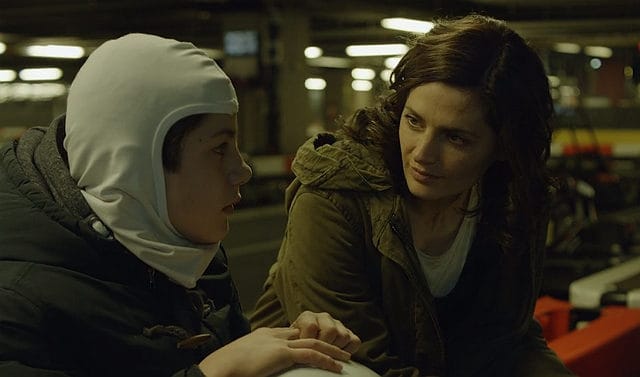 First of all, what is melodrama?

Absentia is a melodramatic thriller – which, despite the way we often use the term melodramatic – is not a bad thing. Hitchcock’s thriller Vertigo, considered by the majority of BFI international film critics to be the greatest film of all time, is also considered a melodrama. Â Pretty much all of Hitchcock’s thrillers were filed under melodrama at the time – to the point that he wrote an essay about his use of genre. Â In it he describes a melodramatic film as one based on a series of “sensational incidents.” Â Â Well, the very nature of a thriller certainly fits that description. Â He also considered the genre to be the “cinema’s life blood.”

However, not all thrillers are melodramatic. Â The action thriller gets its suspense largely from physical events like car chases, gun battles, etc. Â A melodramatic thriller hinges on the personal relationship issues within the story. Â For a more complex discussion of this, check out this article from The Case for Global Film. Â One of the things that the article looks at is why melodramas, because the relationship elements are often seen as ‘feminine” storylines in modern entertainment, often get dismissed. Yet some of the greatest films ever made fall into that category.

In Absentia episode 3, the relationship issues Emily has with Nick and her son Flynn (Patrick McAuley), and the relationship triangle of her, Nick and Nick’s current wife Alice (Cara Theobold), continue to be front and center. This week the sexual tension between Nick and Emily is rising, and Alice’s patience is lowering. Â It comes to a head around some bonding time Emily has with Flynn. Â That storyline is both exquisite and painful to watch. More on that later.

Other relationships are now also getting more scrutiny. Â There’s a big reveal from Emily’s brother Jack ( Neil Jackson). Â The title “The Emily Show” comes from expressing two previously unknown facts that Jack voices in a drunken rage. Â For one, he’s always been jealous of his younger sister Emily and wishes she hadn’t come back. The second reveal is learning that Emily was adopted. Â Given the loving relationship between her and her father in Absentia episode 2, that was a surprise.

Then there are the relationships between Emily, Nick, and their coworkers at the FBI, as well as detective Tommy, (Angel Bonanni). Â Â We saw some of that come up in episode 2 when Emily is upset with her old boss, Adam Radford (Ralph Ineson), for considering her a suspect in the murder of a sex trafficker. Â Suffice it to say that all of the relationships with Tommy, their boss and co-workers become more strained. Â At one point Nick is in the office looking at everyone’s shoes with suspicion Â -another Hitchcockian visual.

The Use of Music and Ambient sound

But in Hitchcock’s most powerful films it is impossible to separate music from the visual fabric or plot. Music has as much a role to play as any of the characters. It might charm them or be used by them. Â But it also can reveal more than they know, offering secrets or promising salvation. Â

I’m sure the use of music in Absentia has been well done all along. Â In Absentia episode three though it’s truly outstanding and again brings to mind how Hitchcock used music in his films. There are several parts in “The Emily Show” that use music in the ways mentioned up. Â However, both of the scenes below are acted with and involve circumstances of total realism. Â It’s the music that lifts it beyond that into heart-wrenching art.

The music that first grabs attention in this way is the music used when Emily gets to take Flynn go-karting. Â That beautiful music with the haunting piano melody has an odd melancholy that reflects the sadness and tentative joy of Emily getting to spend this time with the son who doesn’t know her. Â This isn’t like a montage or music video. Â The music blends in with the dialogue and the sounds of the atmosphere around them. Together it all sets up a feeling that something bad is going to happen, even though there’s no sense of that coming from Emily.

Furthermore, this piece bleeds over into the scene of Nick at his office trying to discover who could have killed Harlow to frame Emily. Â It’s not exactly the same melody as when we’re watching Emily and Flynn. Â For one, the piano level drops down and changes at times to horn and organ. Â It is though a single piece of music, and it connects Emily, Nick, and Flynn as a single unit, despite not being together.

There’s also the part of the score when Jack comes after being mobbed by reporters. Â In that scene the music is his emotions personified. Â There is no separating the escalating pounding beat from his increasing agitation. Â It all seems to be embodying Jack. Â Visually his clenched hands shake and his body rocks as if the sound emanates from him. Â Even the ambient sounds of slamming doors and windows seem to be a part of the music’s mix. Â The tension builds and builds until the snap of him getting the hidden bottle of alcohol from outside the window. Â Then there’s a new suspense. Â Will he drink it? Â We’re left to find out later.

Next up: the final Hitchcockian element – romance.