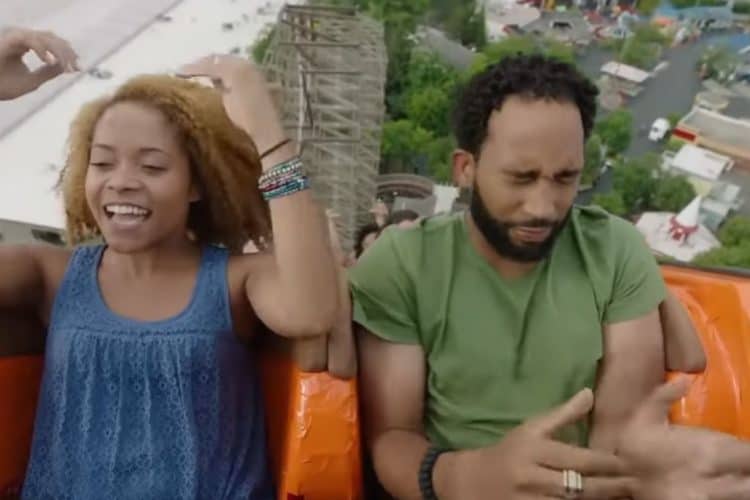 Some people really don’t like rollercoasters, and it shows on their faces when they actually step on one since it takes everything they have not to dash off and run for the hills. It’s hard to say just what it is that turns some people off since it could be the motion, the fact that you’re up in the air twisting and turning and relying on modern technology and engineering to keep you safe, or something else. But the actor in this Esurance commercial does his best to keep things together and keep it tight so that he doesn’t ruin the take, but the raw footage that’s been released makes it obvious that it was doing everything he could not to just bolt. The idea of a paycheck can make a lot of people do a lot of things, but the fact still doesn’t appear to sit well with him since partway through the video one can see that he’s passing out since he just can’t take it.

This full 20-minute raw video manages to show the poor actor as he does his absolute best to keep his cool and composure and fails utterly. It’s a little too difficult to really keep yourself composed when you really don’t like doing something, especially something that’s happening at such a speed that demands you deal with it right then and there instead of taking your time. Anyone that’s been on a rollercoaster and that would include a lot of us, know that the exhilaration felt during a rollercoaster ride is no time to try and calm yourself down since the speed and the acceleration is just too much and needs to be endured and enjoyed. These kinds of rides don’t really let you catch your breath that often until the end since even the climb to the drop is enough to make a person anxious at what’s waiting for them on the other side, especially with rollercoasters that flip the riders upside down at top speed and are known to whip from one direction to another. The trust that a person has in a rollercoaster track and those operating isn’t always something that’s brought up since it often feels like bad luck to mention such things right before going on one. A lot of folks might not believe in the bad juju that is said to occur when we talk about things we’re afraid of, but it definitely helps a person’s mindset to not talk about it, unless someone is just intent on being as mean-spirited as possible and can’t help themselves.

The actual commercial was obviously going to be a lot different than we’re seeing in the videos above since the poor guy had to compose himself to really get through it. When you think about it, rollercoasters are either designed by sadists or adrenaline junkies or both, since the manner in which some of them are constructed brings to mind the idea that people love being whipped back and forth and tossed all about while strapped into a hunk of metal. some people actually do and look forward to being tossed about like a rag doll, but others are willing to try anything at least once. When making your way onto rollercoasters such as this however it’s usually wise to make sure that it’s not bound to aggravate any pre-existing condition that you might have. It’s not really a joke, since anyone riding a rollercoaster is taking their health into their own hands, as dramatic as that sounds. Maybe it comes from having an older and hopefully wiser perspective, but rollercoasters are definitely for those that can handle the ride and aren’t bound to feel motion sickness or other issues that might keep them from enjoying the ride. Then again, some people just aren’t comfortable when riding rollercoasters.

Obviously, the end result was going to come out as something that looks entirely professional and doesn’t make it look as though the poor guy was about to hurl. Seeing someone pass out on a rollercoaster even for a couple of seconds isn’t bound to sell anyone on the idea of the commercial, especially when the narration is talking about things that people want to do again. Imagine the footage above this clip being used instead, and how much it might actually affect the company that’s paying for the commercial. It would almost be like McDonald’s making a commercial featuring a person going in for heart surgery, it just wouldn’t work. But the actor obviously sucked it up and got it done, and with some careful editing, it was made into a working commercial that didn’t look too bad when all was said and done. That’s one of the biggest tricks to be sure, the editing that goes into just about anything. As long as they had a few good shots, it was a success.