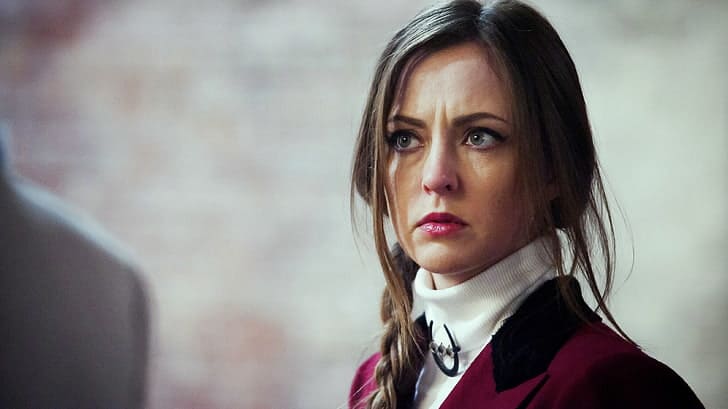 One might think that Katherine Isabelle would be a little easier to remember by name considering all she’s done, but when tallying up the work she’s accomplished, of which there’s plenty, one also has to realize that for all the drama she’s participated in, there’s a lot of horror credits on her bill as well. There’s nothing negative to say about this, but sadly, horror movies and shows don’t always grant an immediate and equal level of fame around Hollywood unless one is fortunate enough. For one reason or another, horror doesn’t always get looked at in the same manner when it comes to times for awards and accolades, and this is what Katherine has done a lot of in her time as she’s been part of the Gingersnaps movies and other such noted projects such as Freddy vs. Jason and See No Evil 2. Calling her a scream queen might be a stretch even with her reputation, but she’s definitely been seen as one of those that have found the necessity to strip down and bare it all in a horror movie in the past, for which a lot of adolescents were likely grateful. To be fair though her acting hasn’t been horrible and she has been on point for a good part of her career, but again, horror just doesn’t always guarantee instant and overwhelming fame.

One thing that’s kind of funny to note is that even with all the horror she’s seen on screen she’s rather squeamish when it comes to real blood. Really though, that’s not too hard to believe since the knowledge that something is fake vs. the knowledge of what’s real does work on the psyche a little differently, and being skittish when it’s the real thing is the failing of a lot of people. For one reason or another, some folks can’t stand blood when it’s the real thing, as some will pass out, some will get sick, and others just can’t take the sight of it. Hey, it’s understandable, that stuff is supposed to stay inside. But apart from that, Katherine has been up to her elbows in fake blood over the course of her career and has waltzed from one horror flick to another in an attempt to keep her reputation up and keep her career moving forward. If you can believe it, she started out in the late 80s as a kid and has been keeping herself going since then. It’s likely that you’ve seen her a time or two since she hasn’t always stuck with horror, but it does appear to be her niche in a big way.

The whole stigma of horror not being a big hit at a lot of well-known awards shows that not only are horror movies kind of snubbed as a rule but that the Academy Awards are, as one can easily guess, kind of biased in a big way. Let’s be honest, there have been horror movies that have been noticed, but said movies are typically those that are intellectual in some regard and play the game that the Oscars are well-known for. In other words, if the horror movie is something that’s groundbreaking, innovative, and can impress the judges, then it stands a slight chance of being given the type of consideration that other movies will receive. The movies that Katherine has shown up in aren’t exactly of that caliber, nor are they bound to win anything but the types of awards that show up on her filmography. While some might want to say that such awards don’t mean as much, the snobbery is easy to ignore since Katherine has been around long enough that she can state that she’s been there, done that, and can move forward without worrying about what others think. Quite honestly she’s made a great career for herself, and whether or not she wishes to move away from horror is hard to say, especially in an era that, much like those before it, has seen actors attempting to break out of the roles that they’ve become so skilled in. Some might see her as an actress that’s skilled at horror, but whether she wants out or not would be interesting to learn. After all, changing up one’s career is sometimes a wise move, but it’s bound to be a little difficult when the actor has built up a strong reputation that’s hard to break free from.

It does appear that Katherine has been doing what she can to diversify as the years continue to roll by, and it’s a big hope that she’ll end up going down as a legend in some way when that day finally comes along. Until then it’s easy to find the work that she’s already done, and it’s very easy to see how she’s lasted so long in the business.