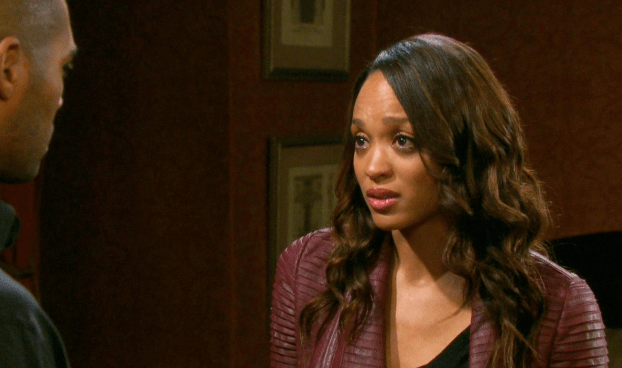 Days of Our Lives fans know that there’s been many women on the show over the course of Salem’s long history. With so many things happening around here, it’s easy to see how there could be so many actresses who come on the scene to, well, make a scene. Some are so good that they get to spend many years playing the same character. Some are so good that they get to come and go as they please. They are fan favorites who get to take time off when they want, and they get to come back as they please. Fans love seeing their favorite actresses all the time, and picking favorites makes it entirely too easy for all of us to forget a few of the former faces we’ve seen. These are the women who are forgotten, even though we did like them when they were around. Who are some of our favorite actresses we forgot even had any business in Salem?

She’s a face we know and love, and she’s been gone a long time. She was on the show for a long time, but she’s not been around in a while. She was the original Belle. She was there to be this young woman through her most formative years, playing the role of a teenager and a young woman when Belle was discovering romance, passion, and all things that got in her trouble as she got older. She didn’t take on the role of Belle as a grown adult and a mother, but she did take her talents elsewhere. She went over to General Hospital to spend some time focusing on herself as Maxie, and she’s made her mark there. Her mark is one that makes her feel good about her life and her choices, and she’s been making her situation even better as time goes on. She’s got some great skills, and that does make us miss her here. There are some fans who prefer her to the current Belle, but not everyone issues her in this role as they love her so much as Maxie.

She was here in the 90s when things were weird, they got weirder, and it was the total package for everyone. We can’t imagine seeing the same story lines right now we did back then because they’d seem downright awful, but they were what fans loved in the day. They were all the things that everyone was down for, and we cannot imagine anyone else even thinking about making the kind of changes that they’re making right now. But, she was there for it, and fans loved her. She played a weird character. She started out as a sort of strange girl from a swamp. She had no family and no life, and she was clearly a lost soul. But, then she became a princess. A real princess. And then she and Austin found themselves in the middle of something so strange and out of the box that we cannot even imagine it today. She wasn’t someone who was around for long, but she did make an impact on everyone around her – well, until we forgot she was part of the show.

She was talented, but she ended up being replaced by someone we love so much that we forget she did not make the character a real person in her own time. You see, Adair was the first Kate Roberts, and she was good. She was good enough that she was able to amass a large fan base over the years, but she was not so good that Lauren Koslow wasn’t able to overtake this role and make us forget that anyone else ever had the role of Kate. But, we digress. Much as we love the current Kate, we did love this one when it was here turn to shine. She spent the early 90s making this character into someone special. She paved the way for Lauren Koslow to take the character to the next realm, and that’s not possible without the work that Adair did during her own tenure as Kate Roberts. We just tend to forget how much we enjoyed her.