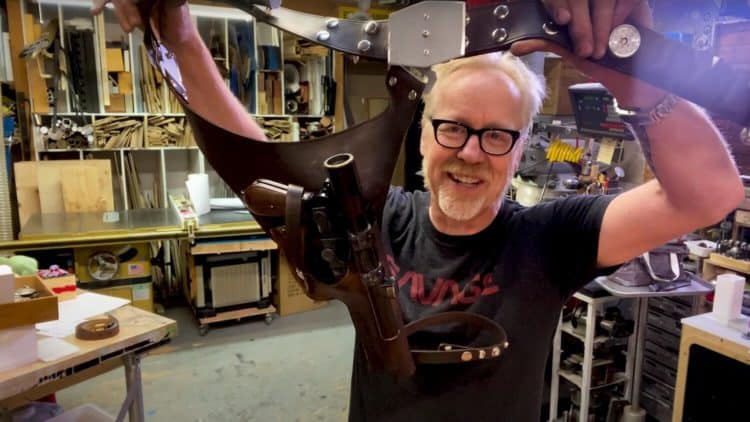 When your significant other crafts you a Han Solo belt all your own because he knows you like it, that proves that he’s a keeper. If they have a shop even close to Adam Savage’s though there’s no doubt that they can create a whole bunch of wonders. Watching Adam get after it in this video might make some people tired since there is a lot of work involved in making this belt, but the glee and joy that he expresses when going about each task is very easy to see since he does get a lot out of what he’s doing. This is the kind of joy that he expresses with every project he takes on and it’s not hard to see why since by the time the project is done he’s put in a lot of effort and work and the end result is something insanely impressive that could pass muster pretty much anywhere and might even be useful as a movie prop if he were to ever sell it off. Tht’s how great of a job this guy can do with the shop and the materials and tools he has at his disposal, since if you can’t find what you need in this shop then it’s possible you don’t know what you’re doing.

When you look at Han’s holster one might notice how low-slung it is and could possibly wonder why it’s not up higher. Part of this has to do with his draw, since the holster does affect it and as anyone that has unholstered a weapon can probably tell you, a holster that is slung lower can help with balance, so long as it’s not slung so low that the weight of the firearm is dragging a person to one side. The way a holster is worn is often due to personal preference since some folks would prefer to wear it up on the hips, some would prefer it off of one hip, and others might have a different way. But the manner that Han uses is custom to the way he draws his weapon. As it’s been seen in the movies, Han is a very ‘shoot from the hip’ type of person when he’s using his sidearm unless he’s actually firing from a distance. Take his his encounter with Greedo for example. Had his holster been worn any higher then his draw would have probably been slower and Greedo might have had just enough time for a second shot.

Building this holster does look like a lot of work since fiddling around with leather actually intimidates some folks since it can be temperamental and it can be a little rough if a person’s not used to it. Plus, it’s not something people can just pick up out of the blue and be good at since there are a few steps that need to recognized and adhered to in order to get things right and to make sure that the finished product works the way it should. This kind of work is something that feels very rewarding when all is said and done, but if one doesn’t find a way to get into it then it can feel like a lot of tedious busywork that doesn’t really do anything for them and doesn’t come naturally at any point. It’s this way with any hobby to be fair since if a person isn’t into it then their mindset isn’t going to be where it needs to be, and details might be missed, screwed up, or somehow forgotten since to make something like this holster, or just anything out of leather to be fair, one’s mind has to be on the project and it does help to have some experience. Plus, it also helps to be something of a Star Wars fan or to at least be aware of who Han Solo is, since looking at pictures of the guy with his gun belt on will help to get the appearance, the dimensions, and to make it as accurate as possible.

Han Solo is one of the top favorite characters of the Star Wars franchise after all, and getting his costume right is highly important to any fan that wants to dress up as the famous smuggler for Halloween since getting him right is important enough that some folks will go that extra mile. Now whether they’ll go the extra ten miles or more like Adam is hard to say since accumulating this kind of shop and the many upon many tools that he works with so constantly isn’t the easiest thing in the world, but there are still plenty of Star Wars fans that will go to the extreme as much as they can. This level of authenticity is great since it shows how big of a fan he is.