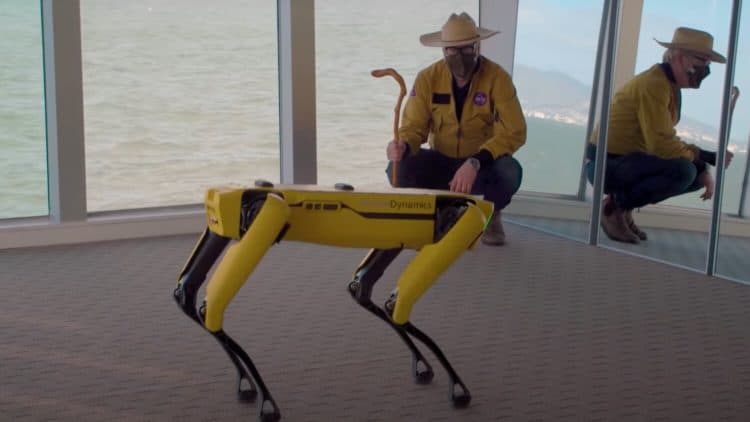 There are some people that would look at this and think it’s harmless since ‘Spot’ is programmed to do whatever is commanded of it, without any deviation in behavior. Others might think that it’s another step down a slippery slope to the day when robotics will go too far and the apparently harmless creations that are made to dance and move about will somehow gain sentience and thereby realize that humans are a little too problematic. It’s not surprising that Adam Savage would find this amazing since the guy loves to know and figure out how things work. There is a definite fascination that people have when it comes to robotics, and admittedly, a lot of what can be done is impressive, but there are those that would argue for caution and it does feel wise to do so if only because humanity already has enough ways to eradicate each other, there’s really no need for another. That kind of fear is usually said to be baseless since the machines that are created only have a limited range of movements that are programmed into them, and every movement takes a great deal of programming since, as the clip explains, every motion has a great deal that goes into it from start to finish. A lot of us don’t think about this since we don’t tend to put a lot of thought into how we move our fingers, our arms, our legs, and how many smaller movements have to take place in order for a person to simply move from one location to another or even manipulate the world around us in the manner required to function during the day.

Much of what goes into the programming of Spot feels a bit mind-numbing, but obviously, those at Boston Robotics are very passionate about what they do and are more than willing to learn and to apply their skills to bringing such things to life so that others can see their accomplishments. In several ways, this is in fact quite impressive since the work and the design, however creepy it is, do represent a lot of time and effort that went into Spot. The many people that still don’t think that robotics such as this are a good idea are going to keep talking no doubt since there is that innate fear that humanity will end up wiping themselves out no matter how careful or how low-key this stuff really is compared to what we see in the movies. But one thing that people should remember is that while robotics are a bit sketchy to some and might bring to mind thoughts of The Terminator, they’re not quite as scary as they might think since the people with the controls still have the ability to shut them down if they need to. Being afraid of machines is a bit irrational no matter how many movies have been made that depict the machines coming after humans since right now humans still have their hands on the controls and are in control.

That word comes up a lot when talking about machines, ‘control’. It’s one thing to be able to control a pre-programmed robot that is designed to advance one’s knowledge of robotics and how movement works, but there is the idea that creating a thinking, reacting, and sentient machine would be kind of a mistake since humans are psychotic enough sometimes, and we don’t really need a machine to copy that from us. Human beings are complex enough when it comes to our thinking process, our emotions, and how all of it gets packed together in one ‘take it or leave it’ bundle that is tough enough to deal with. Having to deal with a machine that has fewer physical restrictions than a human and likely a much clearer idea of what needs to be done to exist would be a difficulty that feels unneeded and undesired since a psychotic machine that is determined to make sense of this mess that humans call life feels like something that could eventually become a threat or at the very least a nuisance that might one day turn into a threat. But maybe that’s just knowledge of the many movies speaking.

Currently, machines aren’t evil and they’re not bent on human annihilation since humans still have their fingers on the controls and are working to better understand how to program machines to move and dance about. One can only hope that things never do reach the level of the movies since it doesn’t feel as though it’s bound to end in any other way but disaster. Playing with robots and enjoying what can be done with their programming is all well and good, and Adam obviously gets a kick out of it. Hopefully the enjoyment lasts without taking a serious turn for the worse.