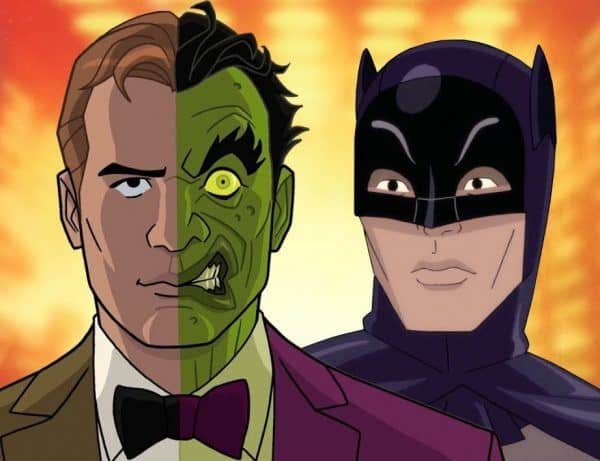 It’s going back to the old school when Adam West and Burt Ward make their return for the animated version of Batman vs. Two-Face. It’s been so long since anyone has actually heard Adam West voice Batman that some people might have forgotten or never known in the first place just who really made the Dark Knight so famous. With his sidekick Robin, Batman is working with Dr. Hugo Strange to try and extract the very evil tendencies from the most dangerous villains that Gotham has to offer. What’s so very predictable about this however is that something goes wrong and Harvey Dent, one of Gotham’s true heroes, is unwittingly turned into Two-Face, a criminal mastermind that is intent upon Batman’s ruination and Gotham’s subjugation.

After so many different voice actors it’s good to hear Adam West’s voice again, in fact the only thing that would make it complete would be if the screen showed the words BAM!, POW!, and several others when a person gets hit. But this being an updated version of the Adam West Batman it’s understandable to omit certain parts.

It’s also nice to see the villains done up as they were in the original show as well. Catwoman is rocking her signature look from the live show, as are the other villains. It’s a bit of nostalgia all around that’s great to see and offers an almost welcome home feel to the classic characters. If only we could have heard Meredith Burgess as Penguin again that would have been uniquely awesome.

Considering that Adam West passed away just a couple of months ago this is a nice tribute to a man that spent a good part of his life being Batman in one form or another. He was so dedicated to the role that he seemed poised to jump back into it at any moment. The honest to goodness truth is that he was probably one of the most convincing Batman figures of all time despite the disparity in technology and special effects. Fans would argue up and down that after Adam West the part of Bruce Wayne and Batman just got better and better, but in truth the groundwork for the character was laid by none other than West himself.

Of course he had a stellar cast to back him up with Burt Ward, Julie Newmar, Cesar Romero, Meredith Burgess, and Frank Gorshin just to name a few. He had the iconic villains, the classic look, and the best show on TV for a while. As soon as kids heard the Batman theme take off they were hooked, and there was no one better for a long while.

That’s part of why this feature is going to be remembered as such an important moment in the Batman mythos. It’s the last time that Adam West will have ever had anything to do with the iconic role he brought to life. In many ways it’s a fitting way to commemorate his life, no matter that he did plenty beyond Batman.

This is how fans tend to want to remember him, and it just feels right.