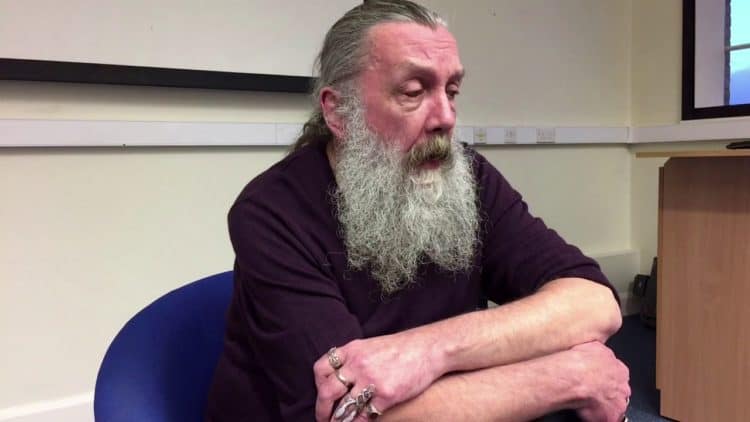 Chances are good that people with a strong interest in comic books will have heard of Alan Moore. This is because the British writer has contributed to some of the most famous comic books that can be found out there, which include a number that have been turned into movies. With that said, it should be noted that Moore is a very interesting figure in his own right, with an excellent example being how he is an anarchist occultist. Here are 10 things that you may or may not have known about Alan Moore:

Moore is very fond of his hometown of Northampton, which is one of the biggest towns that can be found in the whole of the United Kingdom. There was a time when Northampton possessed a strong connection to the English crown, as shown by how Northampton Castle was sometimes used as a royal residence. However, that came to a conclusion with the English Civil War, which saw Northampton supporting the Roundheads, meaning the faction that rallied behind the Parliament rather than the King of England.

2. Got Expelled From School For Dealing LSD

It is interesting to note that Moore had a rough time in school. In part, this is because he went into a secondary school that catered to students from a more well-off background, with the result that he went from being one of the best students in his class to being one of the worst students in his class. However, this situation wasn’t helped by the fact that Moore didn’t have much of an interest in academic study anyways. Eventually, Moore winded up getting expelled from the secondary school for dealing LSD, not least because he made the cardinal mistake of using his own product.

3. Famous For Being Outspoken

Moore is famous for being very outspoken when it comes to his views on a wide range of topics. In particular, it is worth mentioning that he has never hesitated to speak out when he feels that he has been mistreated by a publisher, which is something that has caused him to burn more than one bridge over the course of his career.

Before he made the transition to U.S. comic books, Moore has found a measure of success working on British comic books. In fact, it should be mentioned that it was his work on 2000 AD that convinced DC Comics editor Len Wein to hire him to revitalize The Saga of the Swamp Thing. The result was a comic book series that proved to be a success in both critical and commercial terms, so much so that it encouraged DC Comics to hire more British writers such as Grant Morrison and Neil Gaiman.

5. One of the Creators of John Constantine

Speaking of which, Moore’s time with the Swamp Thing brought about a renewal of interest in magic-associated characters in the DC Comics setting. In some cases, Moore revamped and reintroduced existing characters; in other cases, he created new ones such as John Constantine. Amusingly, Moore created Constantine because Steve Bissette and John Totleben wanted to make a character who looked like Sting. However, he proceeded to make the character stand out by giving him a working class background, thus distinguishing him from most magic-associated characters in comic books in a single stroke.

6. Did “Whatever Happened to the Man of Tomorrow?”

Moore has worked on stories for some of the most famous characters in comic books. For instance, he was the one who wrote “Whatever Happened to the Man of Tomorrow?,” which is still considered to be one of the most memorable Superman stories ever created. For those who are curious, it is supposed to be a conclusion for the Superman mythos, which was being rebooted at the time. As such, the story featured Superman and his friends going up against a host of Superman’s enemies that resulted in what some people will interpret as a happy ending for the superhero.

7. Did Batman: The Killing Joke

On a related note, Moore was the one who wrote Batman: The Killing Joke as well. Said story has been very influential on the Batman mythos. For example, it is the one that featured the Joker’s famous line about “one bad day” driving a normal person insane. Likewise, it is the one that saw Barbara Gordon being paralyzed by a bullet in the spine, thus paving the way for her to become Oracle in subsequent stories.

Politically, Moore is an anarchist, which is wholly unsurprising for people who have read V For Vendetta. With that said, while there is a popular perception that anarchists believe in the complete absence of order, actual anarchists tend to be more nuanced than that. Generally speaking, they believe in the rejection of any kind of unjust hierarchy, meaning that they want people to live under purely voluntary arrangements.

9. Sees Anarchism As the Opposite of Fascism

In an interview, Moore stated that he sees anarchism and fascism as being opposite extremes of one another. Apparently, the V For Vendetta movie’s rearrangement of its politics to be about American liberalism versus American neo-conservatism was one of the things that bothered him about the movie.

Given that Moore is an actual, no-kidding magician who conducts magical ceremonies, some people might expect him to be sympathetic towards conspiracy theorists. However, this isn’t the case. As Moore sees it, there are conspiracy theories in real life, but none of them can claim the kind of influence ascribed to them by their believers, not least because they are stepping on each other’s toes all of the times. Instead, Moore thinks that people believe in conspiracy theories because that makes for a more comforting view of the world than the standard view in which no one is in control of what happens.