Alcatraz unlocks its first episode series premiere event from the mind of J.J. Abrams with tonight’s pilot “Jack Sylvane,” as Detective Rebecca Madsen (Sarah Jones) finds herself embroiled in a mind-boggling mystery of how 1960’s Alcatraz inmates are re-surfacing in present day San Francisco with murderous intent. Alcatraz certainly holds promise going forward, but isn’t quite the dramatic hook some of Abrams’ past TV works have been.

I first saw Alcatraz when they screened the pilot episode at San Diego Comic-Con, though I confess to drifting in and out of attention, owing partly to other assignments of previous Ballroom 20 panels, a lack of anything particularly grabbing within the pilot itself, and just a brutal, brutal hangover from all the socializing the night before.

So while I could have done a better job on focusing on what does, and doesn’t work about Alcatraz the first time around, the eminent prestige of J.J. Abrams and its sci-fi premise would inevitably draw me back in for further viewing.

Then, I found out they re-tooled the pilot a bit from what was shown, and I couldn’t be sure whether what I had watched recently in FOX’s online screening room was the original or the updated version. Even with that dilemma, re-tooling pilots always bodes ill for a series. So keep in mind that what you see from Alcatraz‘s series premiere tonight wasn’t always present, and serves to highlight a few points FOX obviously found problematic, notably a lack of character for lead Rebecca Madsen (Sarah Jones). Near as I can tell, none of the original pilot dealt with the death of her partner, her difficulting in working with others, or her grandfather already resurfacing in present day.

I also did a bit of research into other reactions to the pilot, many of which hit some of the same points, that conceptually Alcatraz seems like a cool idea for series and a smart blend of sci-fi with the procedural, but little else. Clearly the writers are setting up some kind of larger sci-fi conspiracy to explain where the 302 Alcatraz prisoners and guards have been for 40 years, but beyond that most of the action simply lies in unremarkable characters following somewhat typical cop-show beats. I’m reminded of specific comments* from J.J. Abrams on how he envisioned Alcatraz as a less serialized, inmate-of-the-week type series that anyone could find accessible by jumping on to random episodes during the season, and that mentality certainly shows.

(*) Others have also pointed out that in discussing the show Abrams drew on the same ‘Alias as over-serialized’anecdote he used when first describing Fringe, which hit its creative stride by embracing longer story arcs, not avoiding them. 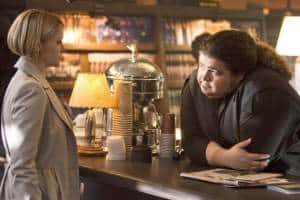 The basic synopsis of Alcatraz unfolds as troubled young detective Rebecca Madsen and Alcatraz expert Dr. Diego Soto (Jorge Garcia) find themselves drawn into the murder investigation of a former Alcatraz staff member, apparently by long-dead inmate Jack Sylvane. Once they uncover too many details of the seemingly impossible murder, secretive FBI agent Emerson Hauser (Sam Neill) recruits them as part of the larger investigation of why Alcatraz inmates are re-appearing un-aged in present day with murderous intent.

With 302 names on the roster to investigate and a host of unanswered questions, Alcatraz‘pilot leaves plenty of room to grow, but could use a little work in developing its characters. Madsen seems to have a colorful enough past, but we don’t grasp much of a clear hook for why she finds herself so drawn to the Alcatraz cases, or even how impossible they seem. As I mentioned earlier FOX seems to have beefed up her grandfather’s role in the mystery, but that shoehorning doesn’t illustrate much of a real connection she has to the man other than blood, or her surrogate uncle (Robert Forster).

Diego Soto on the other hand, everyone loves Hurley, but the pilot doesn’t give the good doctor much to do beyond a couple of ‘gee whiz’reactions and a few dots about Alcatraz to connect. Sam Neill’s Emerson Hauser emerges as a frontrunner for the most intriguing character thus far, but I wouldn’t trust J.J. Abrams to show his hand so quickly. By the same token I expect that whatever orders they might have, each inmate (or guard) the team encounters from the past will run the gamut of emotions, as Alcatraz‘pilot seems inconsistent on portraying Jack Sylvane as sympathetic and remorseless. We feel for him given his plight and unfair treatment in prison, but those sympathies don’t quite gel with his unrepentantly violent nature. I haven’t seen the second episode FOX will air along with the pilot, so we’ll see if character motivations become any clearer.

I’ll definitely keep up with Alcatraz going forward, but I might dip more into the recap side rather than review, unless the show manages to grow out of its more generic cop show conventions. Really, must every leading detective be a loose cannon with family issues that no one else works well with?

See? Not everything needs to draw heavy LOST comparisons. 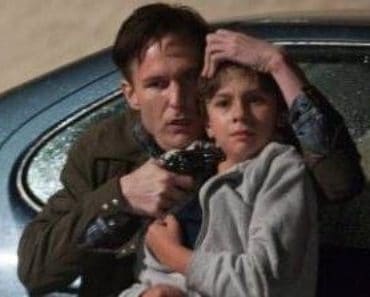