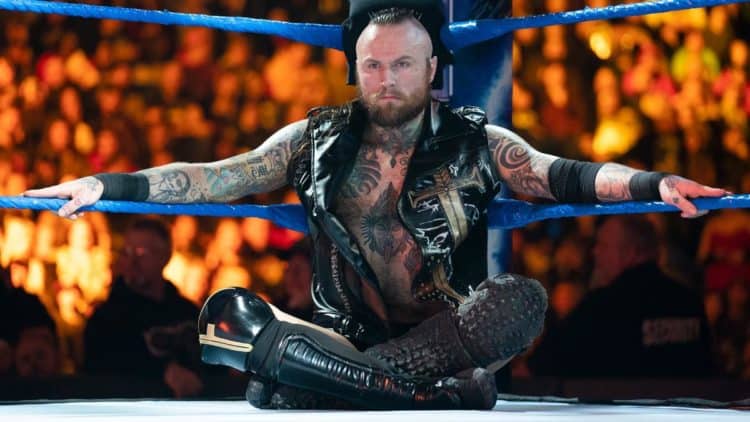 Aleister Black is a professional wrestler who signed with WWE. He is a champion who has gained a great deal of popularity with audiences who enjoy the sport. He has an interesting history but not everyone is aware of his background, where he comes from or some of his most significant accomplishments. For fans who are interested in learning more about him, here are 10 things that you probably didn’t know about Aleister Black.

Aleister Black is a Dutch pro wrestler and his real name isn’t Aleister Black. This is just his ring name that most know him by. His real name is Tom Budgen. He was born on May 19, 1985, which makes him 34 years old as of the Spring of 2019. He is still in his prime when it comes to the sport of professional wrestling and we’re seeing evidence of this in the ring.

Aleister Black married a fellow professional wrestler. He and Zelina Vega tied the knot in 2018. She is also a big name in the ring. Vega’s real name is Thea Megan Trinidad and she is five years he junior of Black. He was born on December 27, 1990, and is a native of Queens, New York. She was influenced by watching professional wrestling with her father and younger brother. Trinidad is a Puerto Rican ancestry.

Proof of Aleister’s popularity is the fact that he appears as a character in a video game. He recently made his debut as a playable video game character in the game “WWE 2K18.” Usually, only the bigger names in professional wrestling are written into video games so this is good news for Black because it will give him yet more exposure as a professional wrestler, and celebrity personality. It will also give him an additional income stream for royalties.

4. He is an international pro wrestling celebrity

Budgen has worked throughout a variety of countries in the world. He has been known by the ring name of Aleister Black in his contract with WWE on the Raw brand as well as NXT. Before he appeared as Aleister Black, he wrestled under the ring name Tommy End in Japan, across Europe as well as in the United States. He’s an international pro wrestler.

5. He has wrestled for several different outfits

Tom Budgen has been contracted for a variety of different big name pro wrestling companies. Currently, he is signed with WWE and is wrestling under the RAW banner. He was also with NXT and was a one-time champion during the time that he spent there. Others include Insane Championship Wrestling, Westside Xtreme Wrestling, Insane Championship Wrestling, Pro Wrestling Guerilla, and Progress Wrestling. He has performed under a variety of different brands throughout his career and he has had a great deal of exposure to wrestling fans throughout the world.

6. He started out in martial arts

Prior to becoming a professional wrestler, Tom Budgens became an expert in martial arts. This was his first encounter for sports competitions. He started out at a young age and he competed in Kickboxing and Pencak Silat since he was just 9 years old until he was 15. You can see the influence of his kickboxing skills in his professional wrestling style when he is performing in the ring. Many of his strikes and the combinations that he uses now are holdovers from his kickboxing days.

7. He has held multiple titles

Wrestling as Tommy End, Budgen is very well known in the United Kingdom. This is the part of the world where he has captured the most championships. He has won an impressive number of tag team championships in the UK. In addition, he has won several world heavyweight championships.

8. He had to secure a visa to work for WWE

Toms signed a contract to perform for WWE in 2016 during the summer, but it took him 4 months to make it over to the United States to appear on the televised matches. This is because he is originally from Holland, and there was a lot of paperwork that he had to get in order before he could legally work in the United States. He had to apply for and obtain his visa, and he also had to make arrangements to have his possessions moved from Europe to the United States. These are the reasons why there was a delay of several months in between when the contract was signed and when he actually appeared in matches.

9. He made a good first impression with US fans

From the moment that Aleister Black appeared in the ring, he made an impression. Fans could tell that there was something different and special about him. Although his name is well-known in the UK, to many US fans, he was relatively unknown and unheard of. There was a mystique about him when he made his debut in San Antonio, Texas. He is extremely tall, laden with tattoos and he has a unique wrestling style that incorporates many of his kickboxing moves.

10. His greatest influence was Japanese wrestling

When Tom Budgen was a child, his father would watch matches from New Japan Pro Wrestling. His biggest influence was from wrestling out of Japan, and to a lesser extent, WCW. He watched WWE when he was in his later teens so he hadn’t had much exposure to the company. The very first WWE match that he watched was in 2000 when he viewed a match between The Rock and Triple H. At this point in his life, he was 16 years old and he was already in training to become a wrestler. Being from Holland where there were not a lot of opportunities for pro wrestlers, he had to travel to different countries where the sport was more popular. It was more difficult and challenging for Tom to find venues in which he could develop his wrestling skills and earn a name for himself.