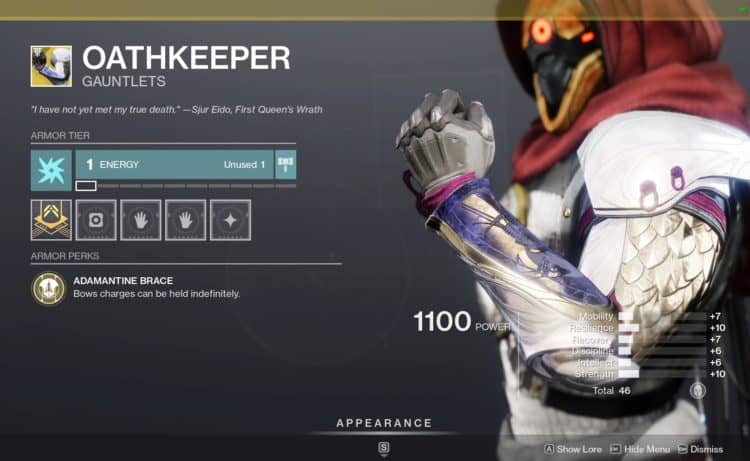 Destiny 2 is well-known by players all around the world as having some incredibly unique weapons and pieces of armor called “Exotics.” These Exotic weapons and armor pieces grant the user all kinds of abilities, and provide them with other useful perks. Today, we’re going to talk a bit about the Hunter class and the Exotic Arms that are currently available to players who have chosen this class. There are a total of 10 Exotic Arms that Hunters have available to them, and while there certainly are some that aren’t the greatest, there are others that are nearly incredibly useful for most content in the game (Hunters, you know what I’m talking about). So, how do each of these Exotic Hunter Arms stack up against each other in Destiny 2?

Oathkeeper just lets you hold your bow charge indefinitely without ever needing to release the arrow. That’s it. Oathkeeper used to be okay, but Bows aren’t really meta, so unless the meta shifts to Bows, Oathkeeper will probably remain pretty untouched in all activities.

The Aeon suite of Exotics used to be really bad and pretty much entirely useless – now, they’re only mostly useless. After Bungie reworked the Aeon Exotics, they have a couple of different mods to provide various benefits that are actually a lot better than the original perk, but none of them can really match any of the other Exotics that Hunters have available.

Mechaneer’s Tricksleeves increases the ready and reload speed of your Sidearms, and swapping to a Sidearm while you’re critically wounded increases its damage. If you love Sidearms and have an entire build centered around them, then by all means this is the Exotic for you. Unfortunately, Sidearms just aren’t all that powerful right now.

With its Exotic perk “Wish-Dragon Teeth,” Young Ahamkara’s Spine increases Tripmine Grenade duration and blast radius, and allows ability damage to grant Tripmine Grenade energy. This would be slightly better if it didn’t lock you into not only a single subclass, but a single grenade choice as well.

Shinobu’s Vow’s Exotic perk reads: “Improves Skip Grenade, and you gain an additional Skip Grenade charge. Skip Grenade returns energy when it damages enemies.” While this is by no means a bad Exotic, there’s just a few that outweigh Shinobu’s Vow in the long run.

Sealed Ahamkara Grasps reload your currently equipped weapon after dealing melee damage. The utility on this is great, especially if you’re using weapons that typically take a while to reload like a Grenade Launcher or Machine Gun. I’m always a fan of armor that provides any sort of reload bonus – I hate reloading.

If you use Smoke Bomb religiously, then you’re probably going to have some words with me on Twitter later (please don’t). Khepri’s Sting allows you to instantly cast Smoke Bomb after punching someone with full melee energy, gain Truesight while in your own Smoke Bomb, and allows your smoke bombs to deal increased damage. Again, this isn’t bad, but there’s just some better options – unless you just love Smoke Bomb.

Athrys’s Embrace is great for dealing with Unstoppable Champions with its Exotic perk “Skittering Stinger.” This states “Weight Knife gains a second bounce. Rapid precision hits with your weapons grant Weighted Knife a significant damage bonus and the ability to stun unshielded combatants for a short time. Empowered Weighted Knife is strong against Unstoppable Champions.” What’s nice about these Exotic Hunter Arms is that you could potentially run all three Champion mods with a single armor piece.

Shards of Galanor is one of the best Exotics in the entire game as it returns Super energy on hits and kills with Blade Barrage. If you’re a Hunter playing Mayhem, this is (unfortunately) just about the only Exotic you should be using, because kills just fall into your lap. It’s also really good in PvE and is apparently a Boss DPS method against the Templar in Vault of Glass. I haven’t tried that out yet, so I wouldn’t know if that’s entirely true, so don’t quote me on it.

Finally, we’ve got Liar’s Handshake. This Exotic states “using your Arc melee ability or being hit by a melee attack will allow you to follow up with an extremely powerful melee counterpunch that will heal you.” Combining this with Gambler’s Dodge and Combination Blow, you will be nearly unstoppable. This Exotic ran rampant in PvE for quite some time in Season of the Worthy, and although it got nerfed, it’s still a fantastic option.

So, there’s my list of the Destiny 2 Exotic Hunter Arms! What do you think?