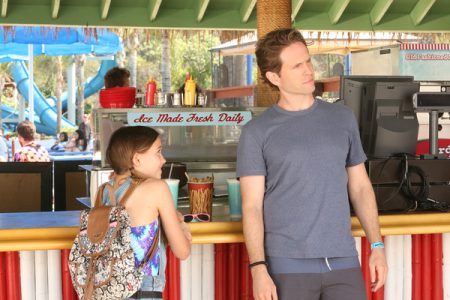 It’s Always Sunny in Philadelphia makes no secret of the fact that the main characters are unstable, selfish, and all around bad people. More often than not, the show plays off of this idea to set up storylines and get laughs. Despite the gang being in a location that we’ve never seen them before, a water park, this week’s episode used that same formula. For each member of the gang, one particular trait was highlighted this week: their selfishness and desire to get ahead in life by cheating the system. Of course, for every one of them, this ended badly but that doesn’t mean they’ll be changing their behavior any time soon.

Arguably the most childlike member of the gang, the water park was the perfect place for Charlie to find himself. It doesn’t take much for him to get Frank to go along with his ideasÂ and this time they had their sights set high: conquering every single ride in the park in just one day. With long lines and a lot of ground to cover, they quickly realized this wouldn’t be possible if they just played by the rules. Having seen a child with leukemia get to skip everyone in line, they didn’t hesitate to come up with their own reason to do the same. With their goal in mind, it became obvious they’d need to pretend that Frank has AIDS.

Out of everyone in the gang, it actually looked like Frank and Charlie’s cheat to get what they wanted was actually going to be the most successful. No one stopped them as they went on ride after ride, easily making it to every ride in the park. But these characters don’t have any impulse control or common sense, so they of course took it too far by deciding their goal wouldn’t be complete until they went down the water slide that wasn’t ready yet. In fact, the water hadn’t even been added to the ride. In the end, Frank went down anyway, bloodying his back to the point that, in an ironic twist, it looked like he actually had AIDS. Despite this, I have no doubt that if Frank and Charlie ever found themselves in the exact same situation, they wouldn’t change a single thing they did.

The consequences of their constant need to cheat the system were felt much sooner by Dee and Mac, though this one was entirely Mac’s fault. He’d been using the same laminated wrist band to get into the water park since he was a kid, refusing to pay admission for the park. It was this wristband that got him and Dee stuck on a water slide, leaving them to deal with a lot of kids who were stuck behind. Dee by herself might have had a chance in life at being somewhat less damaged but by allowing herself to constantly be caught up in whatever the gang is doing, she’s ruined any chance at that. Once again, she was forced to face the consequences of one of their actions, this time in the form of children’s pee.

Dennis’ journey in this episode was perhaps the most interesting one, as he took on a young protÃ©gÃ© and taught her all of his tricks on how to cheat the system. After she pretended to be his daughter to get twenty dollars, he later found her in trouble for stealing sunglasses. He set out to teach her a smarter way to get the things you wanted without getting caught. Throughout the day, they amassed quite the collection of stolen goods while also treating themselves to free meals.

While the Dennis we’re used to would want nothing to do with children, he actually found himself enjoying her company. In a lot of ways, this was probably feeding his ego, which we know is very important to Dennis, as the young girl looked up to him and was eager to learn everything he knew. In the end, it appears that he taught her too well though, as she played off of the emotional connection they built and ultimately ended up duping him and taking all the stolen goods for herself. Dennis couldn’t even really be mad about it, choosing instead to be in awe of what the girl could accomplish, perhaps a credit to his own ability to teach her.

So despite having tried once again to get ahead by not paying for things and pretending to have AIDS, the gang actually found themselves falling behind. Frank ended up with a bloodied back, Dee and Mac were stuck in a disgusting slide all day, and Dennis was conned by a child. A normal person might see and acknowledge this by realizing that their attempts to work the system actually end up hurting them. But the gang has never been good at learning lessons so more likely than not, they’ll just continue going about their lives without changing a thing.

The gang tried and failed to cheat the system while at a water park in a fun episode of It’s Always Sunny in Philadelphia.