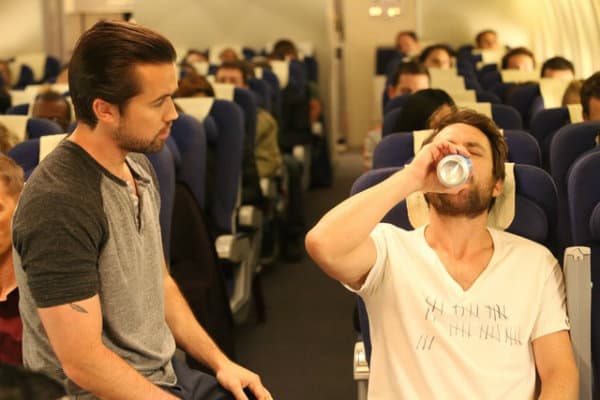 It’s Always Sunny in Philadelphia is one of those rare shows that, no matter how many times you’ve seen an episode, you will still find it hilarious upon rewatch, which is a good thing, because the wait between new seasons seems to be getting longer and longer. After over a year of no new episodes, It’s Always Sunny finally returned last night. Another thing about this show though is that it is always worth the wait. From the cold open, which featured the gang wearing shirts to tally how many beers they’ve had during their flight in an attempt to beat Wade Boggs’ record, it was clear that It’s Always Sunny in PhiladelphiaÂ was back and just as good as ever.

Whenever Mac is put in a position of authority, hilariousness always ensues. Last night’s episode was no exception, as Mac was made commissioner of their beer drinking. Additionally, last night It’s Always Sunny in Philadelphia was filled with a number of baseball references; from the music to the scoreboard keeping track of how many beers had been drank, it all felt like an actual baseball game. Except, obviously, with beer instead of baseball. Some of the best parts of the episode came from their baseball references, most notably when Dee begins taking ‘performance enhancing drugs’ to keep her from falling asleep. As commissioner, Mac feels like he must sweep this indiscretion under the rug, an obvious dig at what often happens in the MLB.

Undeniably, most of It’s Always Sunny‘s charm comes from the gang being genuinely bad people. We got to see plenty of that in last night’s episode, as Frank and Dennis bet to see who could have join the mile high club first on the airplane. After succeeding in his mission, Dennis goes so far as to get off the plane early in order to avoid spending any more time with the woman he slept with.

What makes this show even better is how oblivious all the characters are to just how awful they truly are. This is further seen when Frank laces a man’s beer with sleeping pills because they’re worried about a limited supply of beer on the plane. After the man has a medical reaction to the pills, Frank pretends to be a doctor, not because he cares about the person but only because they don’t want to have to stop the contest to get him real medical assistance. They legitimately don’t care about other people, and it’s hilarious.

The rivalry between Dee and Charlie was perhaps one of the most fun parts of the episode, as both Kaitlin Olson and Charlie Day brought the laughs through their amazing performances. Dee believing that the whole competition was about Boss Hogg instead of Wade Boggs was simply fantastic, and it allowed for cameos from both celebrities. Throughout the episode, as Charlie became more and more drunk, it was entertaining to track Charlie Day’s delivery of the lines. His speech became less and less intelligible, until by the end, they were using subtitles so that we could understand him. Not many actors could have pulled that off as well as Charlie Day did.

The gang was back in full force last night, managing to deliver a bottle episode which took place almost entirely on an airplane. After nine season of consistently delivering new and interesting stories, It’s Always Sunny in Philadelphia is still able to stay fresh. The only real disappointment from the show comes from too short of seasons with too much time in between. But I suppose that’s the price we have to pay as an audience so that the seriesÂ can remain as good as ever.

-The gang not believing Wade Boggs is still alive, despite how many times Mac tells them he is.

-Frank believing he is the first to think of the the mile high club and him giving it his own Frank-specific name.

-”Excuse me, Mr. Person, would you mind switching seats so I can sit with my boyfriend?”

-Charlie still needing to be subtitled the next day