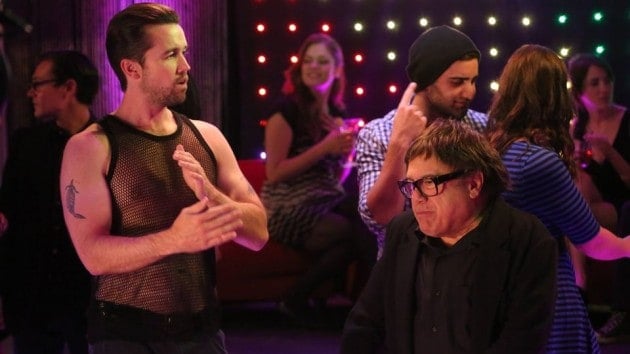 I’ve mentioned in previous reviews that it would be interesting to see how each member of the gang functioned without the toxicity that is present when they’re all together. Being the brilliant show that it is, It’s Always Sunny in Philadelphia gave us a glimpse of what this would look like in last night’s episode. It wasn’t pretty, but it was hilarious.

Unsurprisingly, Dennis was the least stable member of the gang when he was on his own. We’ve seen him have problems with rage in the past, something that he thought was caused by the idiocy of other members of the group. While they’re all delusional about something, Dennis takes it to another level, completely unwilling to see himself for who he really is. He thought he could go back to being the cool, laid back guy that he used to be, but I doubt he was ever actually the guy that he thought he was. Even without the gang around, he cannot stop the rage from consuming him, worse than it ever did when he was with the gang. Not wanting to face the reality of who he is, Dennis returns to the group, where his actions can be blamed on them and where he can pretend he is the coolest one.

Mac is also delusional in thinking that he used to be good at getting girls, and when he separates from the group, he makes it his mission to prove that he still is. He refuses to see what everyone else thinks is pretty obvious: he is gay. He surprises everyone by getting a girl to sleep with him, but it turns out that they were only pretending to sleep together. However, instead of accepting that maybe he isn’t into girls, Mac blames his inability to sleep with her on the fact that she isn’t very attractive. It’s possible that Mac is just as delusional as Dennis; however, his delusion is less destructive to the group as a whole, making it easy for him to go back to the gang at the end.

For Frank, the gang is a place where he can fit in, and they accept him because he finances so many of their schemes. Without them, he is lost and alone, and his solution for this is to find another group that will take him in for his money. We see in this episode how much Frank wants to be a part of things and how much he hates being left out. It’s this feeling that leads him to try recreating schemes that the gang did before he joined them. But because Frank was never the idea man, only the financier, he is unable to get his new group out of trouble when things go wrong. To be successful, Frank needs the rest of the gang just as much as the gang needs Frank.

The best part of the episode was undoubtedly seeing Dee and Charlie away from the toxicity of the group. These characters haven’t interacted much without the rest of the gang being present, and it was fun to see how normal they could be without everyone else dragging them down. I’ve stated in the past that I think Dee would be the most normal of the gang if she wasn’t so influenced by them, constantly being put down and made fun of. This holds true in this week’s episode, as her and Charlie free themselves from the judgement that they often receive from everyone else. They gain confidence in themselves as they take up deaf poetry, and the nice bubble they create is only popped when they inevitably begin making out. If it weren’t for the awkwardness that this creates, Dee and Charlie may have decided to remain away from the group for much longer.

– Every single line of Dee and Charlie’s poetry. Seriously, I’d watch a whole episode of that.

– Dennis talking to himself in his fit of rage.

– Charlie panicking and yelling “BEAK” while ordering at the diner.