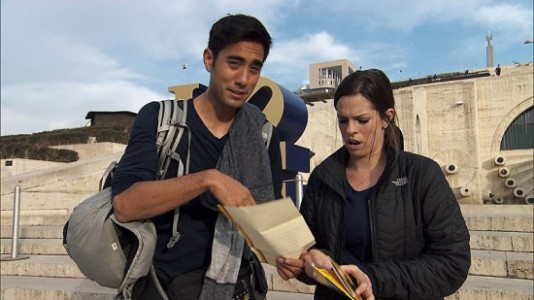 The return of The Amazing Race this week brought with it an emotional journey for one team, while at the same time some frontrunners continued to destroy the competition while others found themselves falling behind. With the number of teams dwindling down, it’s becoming more and more important for the teams to look out for themselves, changing the strategy that some have had of helping everyone else throughout the season. Watching the subtle changes in how teams are running the race as we get closer to the end has been interesting to watch and has definitely had an impact on the results.

This leg of the race took the teams to Armenia, where they sewed rugs, baked local bread, hoped aboard a party bus, and finally tried their hand at changing a car’s oil. It was a fairly easy leg as far as challenges go, but frontrunners Tyler and Korey found themselves falling behind anyway, after an unfortunate start. Before actually embarking on any of the challenges, teams needed to find their first clue by searching inside a theater. Tyler and Korey’s main competition, Brodie and Kurt, had no trouble realizing that they needed to ask the man cleaning the theater for their clue, being the first to get it and leave. For Tyler/Korey and Blair/Scott, it wasn’t so easy as they both lost a lot of time during this first stage of the leg.

After getting past this challenge, most teams had a smooth journey through the rest of the leg. At the Detour, they could either make bread or sew a rug, both options proving to be a little time-consuming but ultimately rather easy for teams. Tyler and Korey were able to pull ahead of a few other teams at this point but still ended up arriving at the Roadblock towards the back of the pack after struggling to find a taxi to take them to the bus they needed to take to the Roadblock.

Meanwhile, Kurt and Brodie remained ahead of everyone else, with their only real competition on this leg being Cole and Sheri, who up until this point had always finished as one of the last teams. They pulled ahead early, as they were quickly able to find the first clue. However, they made a fatal mistake at the Roadblock, electing to have Sheri change the oil in the car, something that she really struggled with. It didn’t take long for Kurt and Brodie to finish, securing yet another first place finish for them and earning them the much sought after Express Pass that every team was fighting for this leg. These boys have put themselves in a strong position going into the end of the race but have also placed a huge target on their back with multiple first place finishes and now having an Express Pass. Other teams are taking notice and will likely not hesitate to slow the boys down at any chance they get.

Because of the way the Roadblock was set up, only a few teams could do it at once, leaving the others to wait their turn. With other teams flying through the challenge with ease, Sheri continued to struggle, not understanding how to remove the oil filter. In the past, other teams that were watching might have offered their assistance especially as she started becoming more frustrated with herself and crying. They all realized at this point however, that if they helped her, that would risk putting them in last place. The only person to step up and help Sheri was Scott, who couldn’t sit back and watch her cry without doing something about it. However, he was a little too late and ultimately, Tyler and Korey managed to make it to Phil before the mother/son team. After such an emotional last part of the leg for Cole and Sheri, they were once again thrown a curveball as Phil announced that they would continue racing.

If this week proved something, it’s that anything can happen on the race and teams like Tyler and Korey, who have taken only first and second places, can just as easily finish near the end of the pack as anyone else. And a team going into the last challenge of a leg in second place can also end up taking last that leg. No one is safe, not even Kurt and Brodie with their Express Pass, as the race will continue to heat up. With teams starting to realize they cannot always help each other out, things will keep on changing as they get closer to the million dollars.

With an Express Pass at stake, this week’s episode of The Amazing Race proved to be an emotional one for some teams.