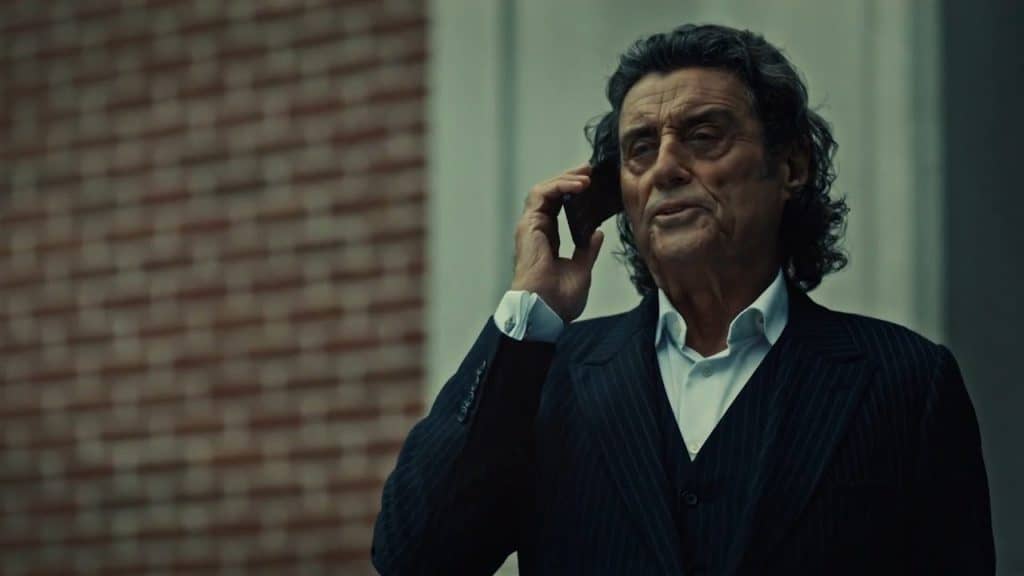 It’s time for a look into the past this episode as Laura Moon and Wednesday both have to deal with mistakes that they’ve made in their own different ways, while Shadow and Bilquis have other problems that are continuing to unfold. The formerly, or still, dead Laura is being taken through the low points of her life as she’s forced to remember back to a time when she supposedly manipulated her father into cheating on her mother, when in fact nothing is as she said it was and her father was simply a louse that cheated on his wife and left his daughter in a hotel room by herself while he went to get lucky with a woman he’d just met. That type of parenting could, unfortunately, explain why Laura turned out the way she did since unfortunately, kids do tend to pick up a few things here and there from their parents as they grow up. And the fact is that Laura did cheat on Shadow right before she died, which sent Shadow’s heart tumbling once he found out and broke up their relationship in a big way. But the fact that Laura is still not ready to face the fact of what happened and is still ill-tempered and unwilling to calm her funky, undead butt down and simply go with the flow is one more reason why she’s so hard to like.

But let’s talk about Wednesday for a moment and his quest to find Demeter, who he was likely less than faithful to since even in Norse legends it’s stated that Odin/Wotan/Grimnir enjoyed sleeping around and was only ever loyal to his own amusements. Obviously, other gods don’t tend to take this too lightly and found his company less than pleasurable after a while. But as to whether she’ll help or not is hard to say at this point since it’s very likely that she enjoys her stay in a mental facility so much that Demeter will end up saying no to Wednesday and will stay right where she is without so much as a dime being donated to his cause. At this point in the game one can’t help but think that Odin is becoming a bit desperate no matter that the new gods are a bit much to take sometimes and are a little more annoying than anything since despite the fact that they bring about innovation and entertainment, they still rely on the old gods for part of that entertainment since technology without substance is a shell, as culture and the fables of humanity tend to bring purpose and reason to the machinations and tools of the current era. That’s why this war feels so lopsided at times, since both sides tend to need each other, but are so adamant about having their way that they don’t see this mutual bond that they share.

In the meantime, Shadow and his landlord are starting to get a little more friendly at least, almost to the point that they’re past the whole idea she stuck a gun to his head since he was trying to break into his own place, but not quite over the fact that she has a kid and is a very guarded individual. As the case of the missing girl continues it’s being made clear that while he’s the odd man out in town he’s no longer under suspicion since his story checked out from the last episode when he went to pay his respects in the city. Unfortunately, that doesn’t mean that Alison has been found yet, and there’s more to that tale to be certain. But with the appearance of the peacock in the woods in the previous episode, it’s not too hard to figure out that Shadow would seek out Bilquis, who is currently having problems of her own since not only did something go wrong with her latest supplicant, as not only did it make her vomit soon after, but the fact that a worried granddaughter is being used as a plot device to get to Bilquis, or perhaps someone is just concerned, she’s now been assaulted in her own apartment, and the only clue that anyone, including Shadow, has to go on is the peacock feather fan with its concealed, bloodied hook, and the fact that Technical Boy was moaning and groaning as he sat huddled against Bilquis’ sofa, either wounded and in need of help, or attempting to sort through some very heavy emotions of his own.

The pool of blood found on the floor doesn’t help the situation either, as one has to wonder what has happened to Bilquis, and how close this war is to popping off now that it’s clear that Bilquis isn’t so much a willing participant as she is a casualty of her own making. Keep in mind, Bilquis decided to work with the new gods in return for being able to accept her worshippers in an easier and more accessible manner. It would appear that one doesn’t work WITH the new gods so much as work FOR them.