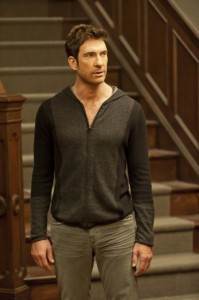 American Horror Story shows off its wares and scares with episode 7 “Open House,” as the Harmons attempt to sell the house to a number of interested parties, while Constance and Larry Harvey (Denis O’Hare) have their own plans in mind for the murderous property. In case you missed out on last week’s “Piggy Piggy,” we’ve got all the ghostly twists and turns to hold you over until the next terrifying episode!

Of course, if you’re too frightened to watch tonight’s action for yourself, read on for our American Horror Story recap of “Open House’!

As the phone sits of the hook, we open on Constance staring into the fire in 1994, when who should come up behind her but a healthy-looking Larry Harvey (Denis O’Hare)! Constance cries that they’re going to take her Beau away to be institutionalized and charge her with criminal child neglect, when out of love Larry agrees to ‘do like we discussed.’He walks up to the attic to find Beau, a hideously deformed and chained child looking to play. He coaxes the child into bed, before smothering him with a pillow!

Back in 2011, Vivien and Ben attend another doctors’meeting to check up on the health of their child, in the process learning that they’re having not one baby, but twins! Each more healthy than the last. As Marcy entertains a prospective buyer (Amir Arison) for the house with his eye on the younger Moira (Alexandra Breckinridge), Vivien returns to introduce herself. Vivien also lays out the full bloody history the house, not wanting to deceive any prospective buyers, to Marcy’s objection. They then find that a second buyer has already made his way into the house, none other than Larry Harvey! Marcy pulls a gun when the negotiation becomes too tense, but Vivien agrees to show him the house, including its library and a familiar fireplace.

Later that evening Vivien attends to herself with some alone time, entertaining thoughts of her security guard Luke (Morris Chestnut), Ben himself, and ultimately the Rubber Man, before shaking off the more troubling thoughts, vibrator in hand. Meanwhile, Violet cuts her wrist once more, until Tate stops her and makes her promise never to do it again. Still not realizing his own predicament, he asks Violet of her belief in ghosts, before adding that her presence makes the house a better place than the afterlife. Afterward, the three Harmons share an awkward family dinner that Violet quickly storms out of, as Ben and Vivien debate their strategy on selling the house, that Larry Harvey had since visited. 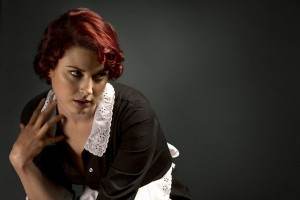 The buyer arrives back at the house as Young Moira answers the door, and she seductively leads him to Violet’s room for a little…south of the border snack…before Ben witnesses them leaving the room , and shares a chat with the man, who intends to bulldoze the house and turn it all into units. Later, Larry Harvey arrives home at his dingy apartment to find Ben already waiting for him. Ben informs Larry he knows the falsehood behind his backstory, that Larry never went to prison for killing his family, but served time in a mental institution.

Larry insists that he needs the house as the only place he’ll ever be happy with Constance, as we flash back to his earlier years informing his wife he’d fallen in love with Constance, and she should move their family back to Ohio. Distraught, the woman goes upstairs and Larry later kicks in an upstairs door to find she started a fire in the children’s room! As past Larry tries in vain to save his family, present Ben informs him of his plans to file restraining order, adding ‘game over.’

Marcy and Vivien take the murder house tour past O.J. Simpson’s house, before they’re recognized by the host, who proceeds to retell the original murder story We also learn from this newest iteration that after his infant son’s dismemberment, Dr. Charles Montgomery actually succeeded in reanimating his son as a hissing monstrosity. In a blank stupor, Nora attempts to nurse the beast as it viciously bites her, then attempting to kill the wretched thing! It survives, but a dazed Nora calmly shoots her husband in the head before turning the gun on herself. But that’s only the first murder story at Murder House!

Constance meets with Larry in the basement, her cold demeanor a marked difference from the earlier flashback. He professes his love but faces rejection and pity at every turn, but he does inform her of the prospective buyer’s plan to destroy the house, uncertain of what will happen to the spirits that reside within. Upstairs, Violet hears noise coming from the attic. She investigates and briefly encounters the monstrous Beau, but not before Tate appears to calm her, and tell her she can shoo away any ghost she needs if she wants. He shows her hidden items hes found in his exploration of the house, but Violet takes particular hold of old photos from Charles and Nora Montgomery. 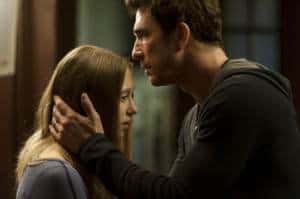 Constance goes to visit with the buyer Mr. Escandarian in an effort to dissuade him from his plans, lecturing him on the way people today build over the past. Not interested in any of her warnings or lectures, he throws her out of his home. Back at the house, Ben and Tate discuss progress he’s been making in his sessions. Once the session ends, Ben asks Tate if off the clock he would make sure Violet is doing okay, and come to him should she ever be in real trouble.

Constance drops by the house to visit Tate after his session, but the boy coldly rebukes his mother. Upstairs in the attic Beau embraces Constance much more warmly, but she informs the monster that soon she’ll have to say goodbye. Dejected, she runs into Moira once more downstairs, and spoils her dreams of the backyard being dug up by Mr. Escandarian, rather that she’ll be entoumbed when he bulldozes the house. They agree they might be able to help one another.

Mr. Escandarian comes by to see Moira again, though this time she leads him into the basement and sits him down for her…south of the border…snack…only this time, she bites it clean off, as Larry strangles him with a plastic bag! He doesn’t totally die, and Constance appears to request that Larry take him off the property to die, lest his ghost become a permanent residence of the house.

Later, Vivien drops in on Violet to talk about the prospect of moving, and answer a few questions about when she knew she’d found love with Ben. Violet changes the subject when Vivien asks why, and instead shows her the old pictures she found of the house. Looking closer, Vivien recognizes Nora Montgomery as a woman who came to look at the house weeks ago! Dun dun dun…

Will the Harmons ever truly be able to leave? What did you think about the episode? Join us next week for an all-new episode of American Horror Story on FX!