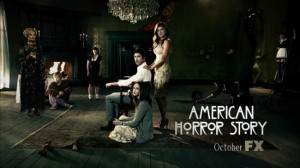 The panel had many points of interest which either intrigued, enlightened, or had audience members rolling in laughter throughout its duration. From highlights of Ryan Murphy recollecting how he practically begged Jessica Lange to take on the role of Constance Langdon some (“seduction” was involved) to Connie Britton describing how eating a gelatin mold of cow brains was “weird,” the cast and crew of the show had no problems show just how funny, and unabashedly morbid, they could be. In other words, they were all perfectly cast for their respective roles on the show.

After discussing the making of the first season of American Horror Story, Tim Stack smoothly transitioned the conversation into what to expect in the horror thriller’s second season. Fans had been salivating for information after the early confirmations of Jessica Lange and Zachary Quinto (who killed his four-episode story arc from last season as joining the cast as two of the seasons main lead roles. The other three actors/actresses of American Horror Story Season Two are Sarah Paulson, Evan Peters, and Lily Rabe (Nora Montgomery), but nothing was revealed about any of their new characters, which Paulson hopes will change by the summer start date for filming. We do too, Ms. Paulson. We do too.

Ryan Murphy also hinted that there may be other faces popping up in cameos and reiterated that the returning actors/actresses will not be portraying their previous roles. Murphy and Falchuk also declined to mention the new location and the nature of the focal plot point/horror story of next season, but did disclose that the show will start filming in July with a premiere date in October.

Other highlights of the night included a brave fan asking Ryan Murphy about the dangling plot point of Constance’s fourth child, which he surprisingly declared could be answered in a later season. Shocker, much? Another fan asked Murphy and Falchuk which of their characters represents them the most. Murphy’s reply? “I’m clearly Constance.” HA! Falchuk, however, felt connected to all the characters on the show, stating that there is a little of himself in all the characters, even a low-life like Ben Harmon.

Even though Evan Peters wasn’t there to discuss his character, Tate did get a lot of discussion time as the creators discussed molding him to win viewers over only to slowly reveal just how psychotic he truly was. Jessica Lange ‘defended’ Constance’s old-fashioned, but brutal, parenting skills, summing up that Constance just wanted the perfect child… despite being completely horrible to them. Oh, how we will miss the Murder House clan…

So what do you guys think about the cast members returning to American Horror Story Season Two? Sound off below!