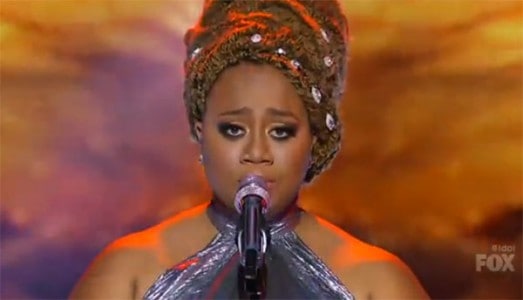 We are only one week away until it’s the end of American Idol as we know it. If recent television trends have taught us anything, the show is bound to return in some form at some point in time, but for this incarnation, the end is nigh. Â We begin with our final four for the traditional hometown visit episode. The night will unfold in three rounds, with the first being a hometown dedication. After the first round, we will be whittled down to the top three, who will continue to round two with Scott Borchetta’s song choice. Finally, each will sing a number chosen by one of the judges. This episode also marks the final show from the Hollywood stage, as the finale will come to us from the Dolby theater next week.

ROUND ONE: HOMETOWN DEDICATIONS

MacKENZIE BOURG- MacKenzie returns to Lafayette, where we get to see him visit his former high school as well as the pediatric wing at the hospital where he was once a patient. I love this episode each year, because we get to see the Idols in all of their hometown glory, where they are now kind of a big deal. MacKenzie dedicates “Hallelujah” to his hometown, and it’s a throwback to his original audition. I think this is when he shines the brightest, on songs such as this. Jennifer thinks it’s a “really strong performance” and declares it “classic MacKenzie”, while Harry feels that he has come completely “full circle.” Keith calls it, simply put, “superb.”

DALTON RAPATTONI- Dalton’s return to Dallas paints a picture that makes me like and appreciate him as a person even more. I’ve enjoyed his performances throughout the season, but seeing him among the people back home warms my heart. I feel like he is a genuinely good guy with a humble heart, and I hope others can relate to him as easily as I do. (He gets his highlights from having his hair pulled through a cap at his grandma’s salon, hello?) Dalton dedicates “Calling You” by Blue October to his hometown of Sunnyvale (the Buffy the Vampire Slayer geek in me got excited when at first I thought he said ‘Sunnydale’), and delivers my favorite performance of his thus far. I don’t know anything about the band Green Day, but I get a Green Day vibe from him for the entire number. Â J.Lo says she “felt a difference” with this song, and believes he delivered it with a new “freedom.” Keith believes it to be the best “Daltonization of that song” and Harry raves about the lyrics. (I’ve often wondered if Harry is aware that this isn’t a lyric competition this season?)

TRENT HARMON- The good news is that I haven’t had any haters sneak into my Facebook inbox blasting me for my opinions on Trent this season. (The bad news is I still have a few more of these to write, and there’s always time for that.) *insert scared eyes emoji here* The highlight of Trent’s hometown visit to Amory, Mississippi, to me is the little girl from his church who ends her little scene with a dramatic Dab. (I love her.) While I don’t care for Trent much at all as an American Idol contestant, I can’t help but appreciate the love he gets from the people who do love him. I love that. His dedication song is “Tennessee Whiskey”, and for me, it’s just more of the same. It’s a love-fest from all three judges, and Trent is surprised by having his family (dog included) appear on stage, which is a sweet moment.

LA’PORSHA RENAE- The queen of the season returns to McComb, Mississippi, with a hometown visit that is the stuff hometown visits should be made of. La’Porsha pays a visit to a domestic violence shelter, and it’s inspiring to see her inspire so many. I feel like win or lose, she is the true American Idol of season fifteen. She dedicates “Glory” by John Legend to her hometown, and it’s nothing short of glorious. She’s in a league of her own here, and makes it seem the other three are playing in the minors. (Whoah, I think I just dropped a sports term??) Her performance leaves Keith feeling like he “just had a baptism”, and Jennifer comments how “music heals the spirit” and “takes people to a better place.” Harry decides the number is in a “critique-proof category” and raves how La’Porsha continually brings “incredible elegance and grace” to the stage.

After Round One, our top three are revealed… and MacKenzie Bourg is axed. He handles his exit like a good sport with a good spirit, and I hope we hear more from him, soon.

ROUND TWO AND ROUND THREE

DALTON– Dalton’s second song is Bruce Springsteen’s “Dancin’ in the Dark” by Tears for Fears, chosen by Scott Borchetta. Â Jennifer, having apparently turned her chair into a trampoline, likes that he made the song feel “fresh” and “new.” Harry thinks it’s a “smart arrangement”, and I don’t know what Keith says, because I am so distracted by his random thumb ring. For his third song, Dalton delivers his weakest performance of the night with “Everybody Wants to Rule the World.” It’s a theatrical number that finds him beginning the song among the crowd, making his way to the stage. Jennifer feels that due to the low key of the song, “some of the brightness was lost.” Keith thinks it’s good he’s already had “two killer” performances, and thinks had he kept this one in the original key, he would’ve nailed it.

LA’PORSHA- Scott’s song choice for La’Porsha is “Stay with Me”, a song she’s not too passionate about. I wouldn’t have guessed that by the performance, because I feel that she nails it. The judges feel that for the first time, they could tell she didn’t believe the lyrics she was singing. (And La’Porsha makes it clear that’s because she doesn’t.) For the judge’s choice, La’Porsha covers Adele’s “Hello” with a rendition to rival the original. Jennifer thinks it “stretched her range” and the guys love it.

TRENT- For the first time in Idol‘s 15 seasons, Justin Timberlake has given the clear for one of his songs to be used, and Scott chooses his “Drink You Away” for Trent. Jennifer says “that’s singing to win!” and Harry notes that when the backup singers stand and clap, that’s a good performance. (side note: I just recently discovered Allison Iraheta, from season eight is one of the backup singers.) For the judge’s choice, Trent gets “Waiting Game.” Keith thinks it’s “tailor made” for him, and Jennifer believes he “killed it,” and gets a little emotional as it’s the last time she’ll get the “goosies” in that theater. Harry delivers his final critique for that Idol stage, and seems confused as to how many contestants remain in the competition. (Paula Abdul’s Coke cup may have returned, again.)

Next week it’s goodbye time, as we get a three night farewell. Who do YOU want to take the final Idol crown?? Comment below or tweet me @jimbob90210 and let’s talk the end of Idol as we know it!!

The top three performers are revealed.